A new swarm of earthquakes started on December 31, 2012 at El Hierro Island in Canary Islands and continued into the early days of 2013.  Volcano Discovery is reporting that most earthquakes are located at 15 – 20 km depth under El Golfo and seem to propagate slowly towards the east. On December 31, 57 quakes of magnitudes 1.4 – 2.4 were registered, on January 1, 43 with magnitudes up to 2.6. 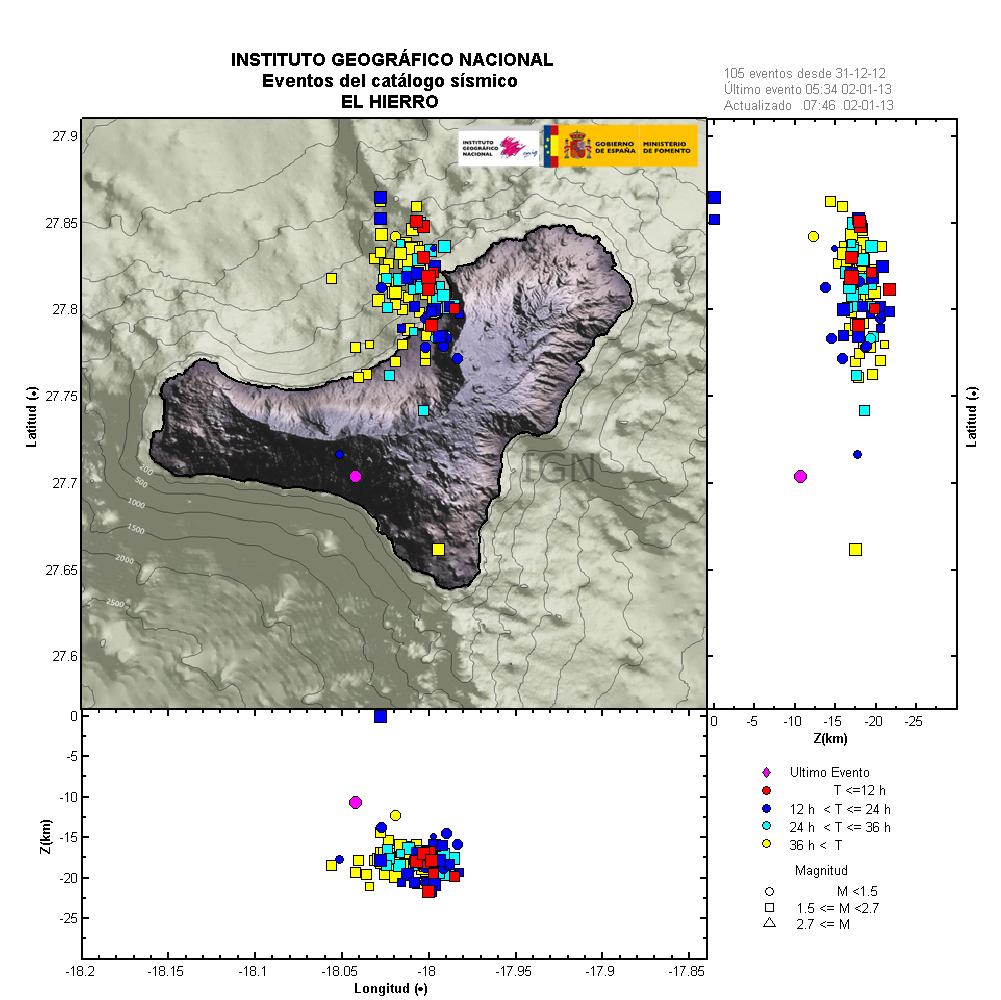 El Hierro, nicknamed Isla del Meridiano (the “Meridian Island”), is the smallest and farthest south and west of the Canary Islands (an Autonomous Community of Spain), in the Atlantic Ocean off the coast of Africa, with a population of 10,162 (2003).

There is evidence of at least three major landslides that have affected El Hierro in the last few hundred thousand years. The most recent of these was the ‘El Golfo’ landslide that occurred about 15 thousand years ago, involving collapse of the northern flank of the island. The landslide formed the El Golfo valley and created a debris avalanche with a volume of 150–180 km3. 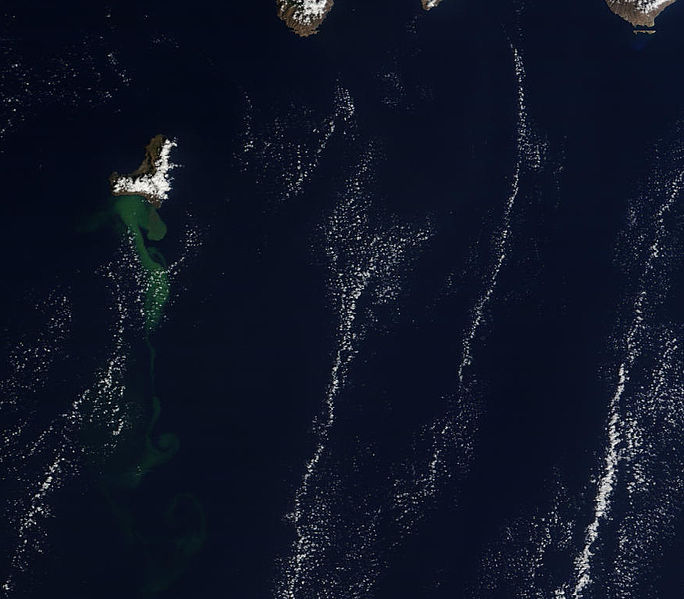 The 2011-2013 El Hierro eruption is an on-going volcanic event just off the island of El Hierro. Beginning on July 17, 2011, increased seismic activity was detected by the Instituto Vulcanológico de Canarias (Volcanological Institute of the Canary Islands) and National Geographic Institute’s seismic monitoring station located in Valverde.

Between 4.15 and 4.20am on October 10, 2011 the earthquake swarm changed behaviour and produced a harmonic tremor. Harmonic tremors are produced by magmamovements and can indicate that an eruption has begun. That same day, patches of pale-coloured and sulphurous smelling water with dead fish were seen off the coast of La Restinga. A small submarine eruption had begun, 2 km south of La Restinga. Eruption ‘jacuzzis’, occasionally reaching 10-15m high above the surface of the water, were seen during the most energetic eruptive episodes.

In early November the 600 residents of La Restinga were evacuated for the second time. A confirmed surtseyan type of eruption phase started at the fissure on November 7, 2011. On November 25 ,2011 the eruption was ongoing with vigorous phreatic bubbles emerging.

Three webcams in La Restinga were focussed on the ‘stain’, the area of the sea under which the eruption was taking place. Several separate plumes of material, aligned N-S, were visible from the air, showing that the eruption was of a fissure type.

The main volcano on the island, Tanganasoga, underwent rapid inflation and increased carbon dioxide gas emissions, which were a cause for concern. On November 24 there were various reports of a sulphurous smell in the El Golfo area of the island.

On November 27 the coast guard vessel Salvamar Adhara collected some pumice clasts, colloquially nicknamed ‘floating lava bombs’ or ‘lava balloons’, some of many that had been ejected by the underwater eruption and floated to the surface of the sea before sinking again.

On December 21, 2011 it was suggested that the eruption was subsiding, as the harmonic tremors and earthquakes are decreasing in frequency; however, in early January 2012 the earthquakes were increasing in frequency and the area of the eruption appeared to be increasing, with a wider area of sea producing the steaming pumice clasts, steam and general “jacuzzi” activity. By late February 2012 a decrease in seismicity, deformation and gas release was noted. In early March the authorities on El Hierro declared the eruption to be over; this was questioned by some vulcanologists. The webcams were taken down. In mid-April 2012 the top of the cone was measured at 86 metres below the surface of the sea. As of June 2012, passive degassing continues at the Restinga underwater vent. (Wikipedia)

A record number of quakes in 2012, more than 240, were recorded on June 26, 2012 (most of them larger than M2 and 6 larger than M3), all were at about 18 – 20 km depth. El Hierro volcano, Canary Islands: powerful earthquake swarm without earlier comparison, eruption warning.