Swarm of earthquakes continues on El Hierro, Canary Islands. 89 earthquakes were listed today by IGN, updated at 19:30 UTC. 12 of these earthquakes had Magnitude of M3 or more. The strongest one was a M 3.6 earthquake at 11:13 UTC.  The center of the activity is still at the lighthouse side of the island.

The quakes were at depths mostly between 20 – 25 km, slightly deeper than most previous quakes and could indicate a new intrusion from depth. Quakes are continuing to migrate eastwards closer towards the area of the 2011-12 submarine vent south of La Restinga. 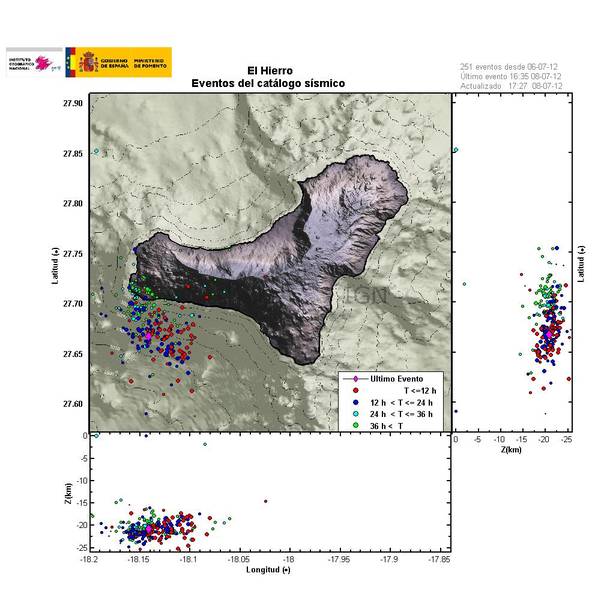 Richard Wilson, a geologist specialized in volcano seismicity and who is also the main contributor of Earthquake-report’s Worldwide Volcano Activity report, describes the El Hierro situation as follows:

There is apparently a new round of seismicity at El Hierro during the past 24-48 hours.  This is typical of intrusive activity, but not eruptive activity. Typically eruptive seismicity is sustained and builds to a crescendo (and occurs at much shallower depth) before material is erupted at the surface. Also, the up-down-up pattern in GPS data also suggests lateral spreading and intrusion rather than an eruptive pattern, which would also build and build and build. Now, that being said, this is my interpretation, with very limited resources as far as instrumental data  and does not preclude a sudden shallowing and intensification of seismicity and deformation (and,…finally eruption!).  All instrumental signs of intrusive activity beneath a volcano must be watched vigilantly while they are in-progress in order to “catch” any of these “signs” of a forthcoming eruption.

During the period of July 1 to July 6, there were about 680 earthquakes, mostly between M1.5-3, but also 56 quakes larger then M3 and 3 larger than M4, the largest was M4.4 on July 2.
In above mentioned period epicenters have remained at about 18-21 km depth at or near the SW tip of the island, suggesting that magma has accumulated there.

Uplift of the island has continued and reached peak values of up to 10 cm total, but also stagnated in the past days.

The next days to weeks will show whether the magmatic process is coming to a halt or continues and still leads to a new eruption.

El Hierro is a 278.5 km2 island, formed approx 1.2 million year ago after three successive eruptions, the island emerged from the ocean as a triangle of basaltic dykes topped with avolcanic cone more than 2,000 metres high. With continued activity resulting in the island expanding to have the largest number of volcanoes in the Canaries (over 500 cones, another 300 covered by more recent deposits), together with approximately 70 caves and volcanic galleries, including the Cueva de Don Justo whose collection of channels is over 6 km in length. Landslides have reduced the size and height of the island.

There is evidence of at least three major landslides that have affected El Hierro in the last few hundred thousand years. The most recent of these was the ‘El Golfo’ landslide that occurred about 15 thousand years ago, involving collapse of the northern flank of the island. The landslide formed the El Golfo valley and created a debris avalanche with a volume of 150–180 km3. Turbidite deposits related to this landslide have been recognized in drill cores from the Agadir Basin to the north of the Canary Islands. Detailed analysis of these deposits suggests that the slope failure did not occur as a single event but a series of smaller failures over a period of hours or days.

El Hierro was known in European history as the prime meridian in common use outside of the future British Empire. Already in the 2nd century A.D.,Ptolemy considered a definition of the zero meridian based on the western-most position of the known world, giving maps with only positive (eastern) longitudes. In the year 1634, France ruled by Louis XIII and Richelieu decided that Ferro’s meridian should be used as the reference on maps, since this island was considered the most western position of the Old World.