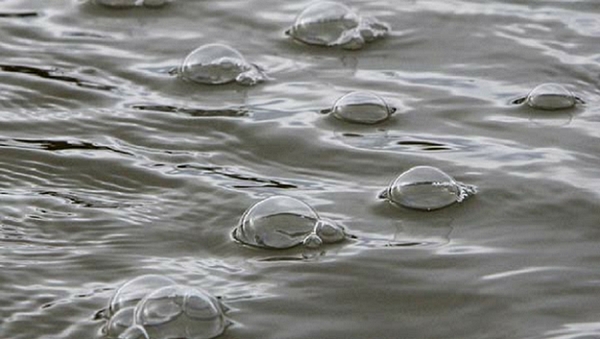 Residents in a swampy area of northern Assumption Parish reported earth tremors as well as venting streams of natural gas roiling the surface of waterways for about a month. Residents reported tremors last month and again on Tuesday and Wednesday. Assumption Parish emergency officials have asked to meet with an expert from the U.S. Geological Survey and for portable seismic equipment to get a better understanding of new tremors reported in the Bayou Corne and Grand Bayou areas. State and parish officials have not made a connection between the tremors and the natural gas releases and are focusing on the oil and gas infrastructure in the area to pinpoint the source of the leaking gas.

The Bayou Corne and Grand Bayou areas are on one of the Napoleonville Dome‘s flanks. It is 5-by-1.6 km (3-by-1-mile) salt dome containing 51 caverns used to produce brine and for hydrocarbon storage. Two of the caverns store natural gas. The cavern holding natural gas nearest to the two communities has undergone a scientific test to assess its integrity. The Louisiana Department of Natural Resources is evaluating a report on the test and is expected to provide the results next week. The cavern is ultimately owned by Chevron Pipeline.

The other cavern, which is about a mile north of the Chevron cavern and is owned by Acadian Gas Pipeline of Houston, Texas, has been shut in for the past five days as a precaution and is being monitored. Parish official are monitoring the air for natural gas levels and the lower explosive limit (LEL) around the waterborne bubble locations and in populated areas. LEL indicates a risk of explosion. The LEL has been zero in almost all reports according to authorities. In a news release Friday, parish officials said that in the Sportsman’s Drive area of Bayou Corne, a stationary air monitor hit 25.2 percent of the LEL on Thursday but officials say the reading is suspicious. Sheriff Mike Waguespack warned the public Friday not to tamper with the monitoring equipment. He said anyone caught tampering or trying to feed the monitors some type of foreign source “will be handled accordingly and will be arrested.”

Concerns would occur at 60 percent of LEL, and 100 percent would reflect an ignition risk. Monitoring tests for chemicals in addition to LEL, including, in some cases, hydrogen sulfide, or H2S. Hydrogen sulfide is regularly tested in connection with oil and gas exploration. Concerns would begin at levels of 35 parts per million and can be toxic at 100 ppm.

Here is a link to WFBA video report