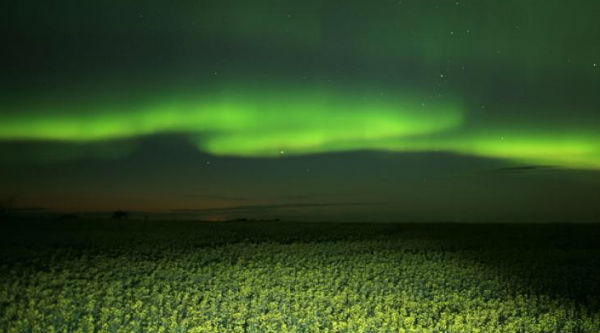 Geomagnetic Storming reaching the minor G1 level was observed due to effects from a minor CME impact. The Bz component of the Interplanetary Magnetic Field has been pointing south at times and this could help intensify geomagnetic activity.

July 9th began with a brief but beautiful display of auroras over North America. The source of the display was not an explosion on the sun, but rather a fluctuation in the interplanetary magnetic field (IMF). The IMF near Earth tipped south, briefly opening a crack in our planet’s magnetosphere. Solar wind poured in and ignited the lights. More auroras could be in the offing. A CME that left the sun on July 6th might deliver a glancing blow to Earth’s magnetic field on July 9-10. NOAA forecasters estimate a 25% to 30% chance of polar geomagnetic storms if and when the cloud arrives.

Region 1515 produced another impulsive, R2 (Moderate) solar flare radio blackout at 1632 UTC (12:32 PM EDT) on July 8.  Solar radiation storm levels increased in response to this event and are just above the S1 (Minor) event threshold at this time.  G1 (Minor) geomagnetic storming is possible through July 8 as a string of CMEs observed last week make their way past Earth.  Region 1515 is approaching the limb, but Region 1520 has just made its way onto the visible disk.  Both of these regions have the potential for further activity. 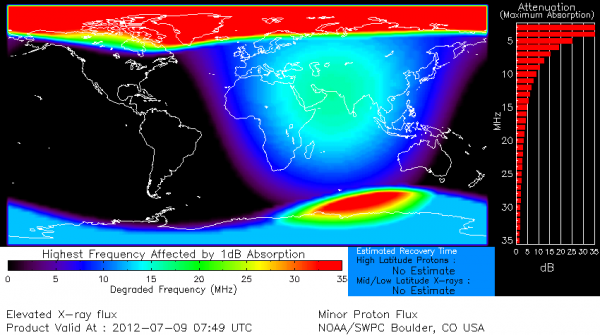 Solar activity was high. Region 1515 (S17W76) produced an M6/1n at 08/1632Z along with a 640 sfu Tenflare, Type II (est. speed 2271 km/s) and Type IV radio sweeps. An associated CME became visible in LASCO C2 imagery at 08/1648Z. The majority of the ejecta appears to be directed southwest but further analysis will be conducted as imagery becomes available. Region 1520 (S15E42) continued to grow to 1070 millionths and is considered an Fhc-type group with a beta-gamma magnetic configuration. The region produced an M1/Sf at 08/0953Z.

Solar activity is expected to be moderate with a chance for X-class events for the next three days (09-11 July).

The geomagnetic field is expected to be mostly quiet on day one (09 July). Quiet to unsettled conditions are expected on day two (10 July), with a chance for isolated active periods due to possible weak effects from the CME observed on 06 July. A return to mostly quiet conditions is expected for day three (11 July). 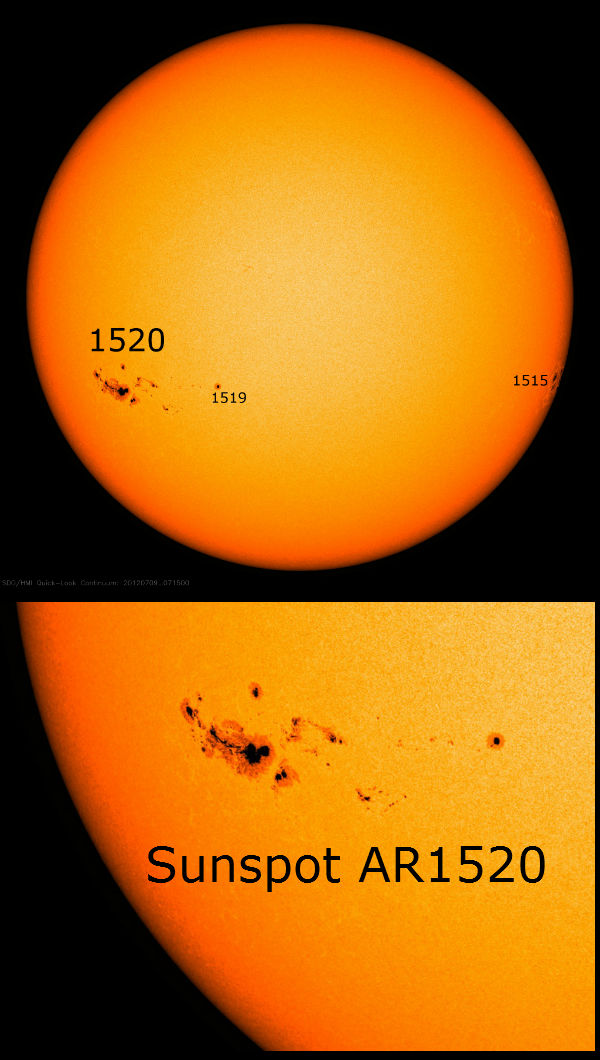 As one big sunspot (AR1515) turns away from Earth, another one is turning toward our planet. AR1520, now emerging over the sun’s southeastern limb, stretches more than 127,000 km (10 Earth diameters) from end to end. AR1520 has a ‘beta-gamma’ magnetic field that harbors energy for M-class solar flares. So far, however, the sunspot’s magnetic canopy is crackling with lesser C-flares. NOAA forecasters estimate an 80% chance of M-flares during the next 24 hours.