An new official map of the Louisiana sinkhole dimensions was uploaded to the Assumption Parish website on October 14, 2012: 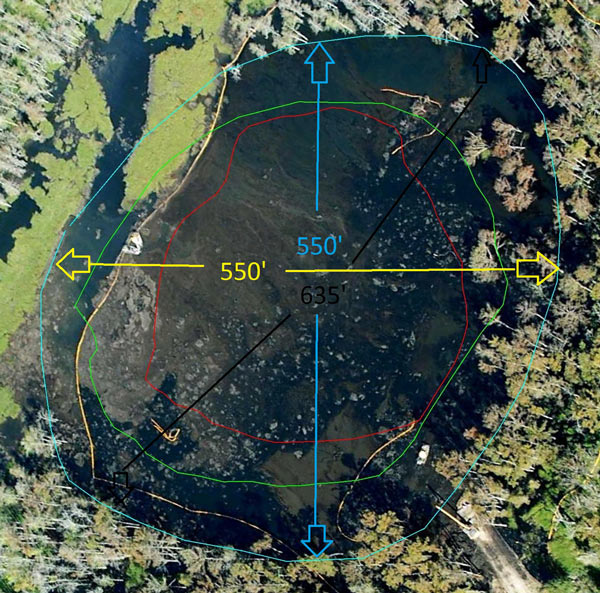 The original image can be found here. ENENEWS has interesting comparison of it with enhanced image:

Analysis of air samples in the Bayou Corne/Grand Bayou area by the Louisiana Department of Environmental Quality demonstrated that the concentrations of toxic chemicals in the air, including Volatile Organic Compounds such as Benzene, Toluene, Ethyl Benzene and Xylene, were below the Louisiana Ambient Air Standards. However, though the concentrations of toxic chemicals were  below acceptable standards, health symptoms continue to be experienced and reported by community members. Read more about it here – LEAN.

On October 11, 2012, photographer Jeffrey Dubinsky took a flight for LEAN and LMRK over the Bayou Corne sinkhole. After the flight, which was generously provided by Southwings, Jeffrey commented on the intense petroleum fumes experienced while flying over the sinkhole area.

“I will say the odor was the heaviest and strongest I have ever experienced in all my time in Louisiana. Perhaps even worse still was that the odor was hovering directly over the community… I have no idea whatsoever how the workers can tolerate being anywhere near it.”

View all photos from the flyover here.

Our previous reports on Louisiana sinkhole: