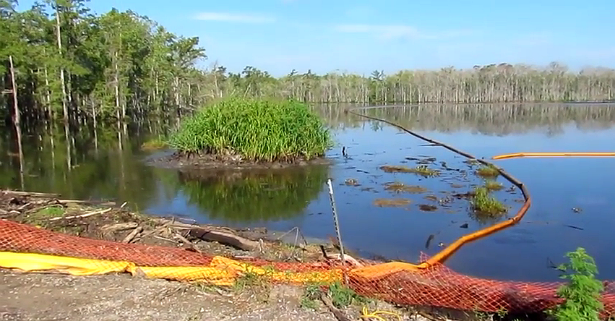 John Boudreaux, director of the Assumption Parish Office of Homeland Security and Emergency Preparedness, has reported another depth survey has been completed in the center of the Louisiana sinkhole on July 20, 2013. Assumption Parish Police Jury released new video showing that 750 feet (about 230 meters) cord wasn't enough long to reach the bottom of the sinkhole. This information has been sent to the Blue Ribbon Commission for there review.

Conservation Commissioner James Welsh ordered Texas Brine Co. to stop with earth-probing tests after gas leak at one site. Texas Brine Co. conducting tests to locate gas at 41 test site in the shallow rock under Bayou Corne. Welsh also ordered the company to provide plans on the construction and abandonment of the test holes by July 22, 2013.

The burp event on the surface of the sinkhole on July 14, 2013 occurred after debris and hydrocarbons located deep underground work their way upward and escape through the sinkhole into the atmosphere. Increase in tremors and another burp event were noticed at the sinkhole site on July 19, 2013. Also, water movement were observed across the sinkhole surface. According to Boudreaux,  it was the biggest movement he's seen yet.

The most recent cyclical water movements raised lots of questions. Some experts suggest that structure instability, gas release, passage connected to Gulf or sediment movements at the bottom of the sinkhole could be the reason for waves at sinkhole surface. At Assumption Parish public briefing held on July 16, 2013 there were no new satisfying answers. Experts stressed that they don't know what is going on out there at the site, they don't know the depth, structure stability situation, cause of water movements or any other explanation for events occurring in Bayou Corne and surrounding area.

Below is the most recent video of sinkhole area released by Assuption Parish Police Jury on July 19, 2013 during a boat ride over one side of the sinkhole, showing a slought-in area that Texas brine Co. reported on July 18, 2013.

The sinkhole site is now stretching across 24 acres area, with estimated depth to be more than 750 feet (more than 230 meters). The burps and bubbles are occurring about once a month now. Experts estimate over 200 million cubic feet of gas in area under huge Louisiana sinkhole. The sinkhole area is spreading.