Lakes and smaller bodies of water do not normally have "tidal waves" which are typical only for oceans and seas but also bodies of water that are connected with them. There are some suggestions that Louisiana sinkhole somehow connected with the Gulf of Mexico through the salt dome and the Louann salt layer which connects all of these salt domes and covers over 7 states. The Louann underlies much of the northern Gulf coast from Texas to the Florida panhandle and extends beneath large areas of the Gulf coastal plain of Mississippi, Louisiana and Texas. Pressure, sediment movements, another floor collapse, gas leak…there is a list of possible causes. 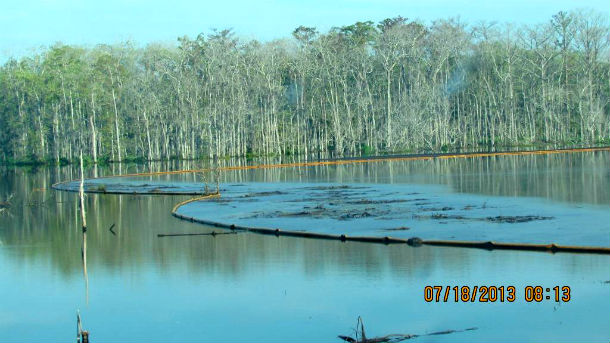 The burp event in the sinkhole recorded on July 18, 2013 (Credit: AssumptionLA)

The burp event on the surface of the sinkhole on July 14, 2013 occurred after debris and hydrocarbons located deep underground work their way upward and escape through the sinkhole into the atmosphere.

John Boudreaux, director of the Assumption Parish Office of Homeland Security and Emergency Preparedness stated the deepest part of the 22-acre sinkhole near the Bayou Corne Community is at least 500 feet (150 meters) deep. That is far more than previous estimated depth of 110 to 220 feet  (35 to 70 meters) deep measured by Texas Brine. The most recent sonar test on June 7, 2013 found the depth of the sinkhole to be 140 feet (43 meters) deep. According to experts, the depths change because the sediment in the sinkhole is constantly shifting and changing.

Similar event occurred in April 2013 when tidal waves were observed at the surface of the sinkhole. (Watch the video here) 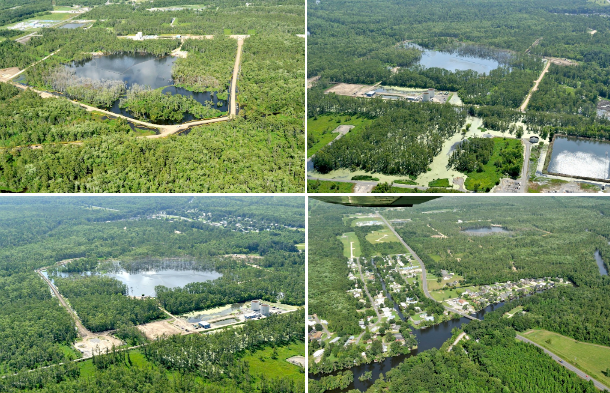 Image set from "On Wings of Care" crew flyover on July 10, 2013 (Credit: OnWingsOfCare)

The burps are occurring about once a month now. Experts estimate over 200 million cubic feet of gas in area under giant Louisiana sinkhole. A massive methane deposit could take years to drain.

At Assumption Parish public briefing held on July 16, 2013 Gary Hecox, CB&I hydrogeologist stressed that they have talked to some of the leading experts in the world as too what could be causing the problem. Here is his short statement from the briefing:

"Nobody’s ever encountered anything like this in the history of mankind. I’m not kidding, what’s going on with that cavern where it’s going up several hundred feet and down several hundred feet, we don’t know if it’s some equipment issues or if there’s something going on in the cavern that we don’t understand. The pressure in the cavern continues to slowly increase. It’s up now to almost 600psi in the wellhead, that’s brine pressure not gas. I don’t even have a good hypothesis to tell you. The world experts have looked at this and we don’t know."

You can watch Assumption Parish public briefings on their youtube channel.

Bellow are the latest flyover videos recorded on July 2 and July 10, 2013 showing the water surface area at sinkhole site and neighboring residential community of Bayou Corne.

Featured image: Louisiana sinkhole aerial view taken by "On WIngs of Care" crew during flyby on July 10, 2013 (Credit: On Wings of Care)