Boiling bubbles in the waters of Bayou Corne, in Assumption Parish, about 50 miles south of Baton Rouge in Louisiana, US, concerned residents in mid-May. Then, suddenly a massive sinkhole appeared on August 3. It forced the closure of nearby highway 70 after a gas line along that route bent and led to fears of an explosion. Officials believe the sinkhole could give off radiation or cause explosions that would harm local residents. Nearly 150 residences were asked to evacuate their homes on August 13 after the sinkhole swallowed nearby trees. Assumption Parish Police Jury continues monitoring Bayou Corne and Grand Bayou waterway bubbles.

Officials with GOHSEP say the sinkhole has grown and it is now 145 meters (476 feet) by 195 meters (640 feet). As expected, the surface of the sinkhole that has formed in Bayou Corne has grown over the past few days as the land on the outer edge of the area is sloughing off into the sinkhole. The sinkhole sits on top of an underground mountain of salt and residents of Bayou Corne have been reporting tremors and gas bubbles for weeks. 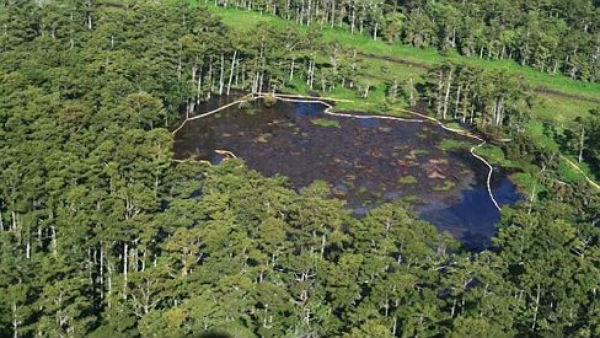 Dr. Madhurendu Kumar, DNR director of the state's oil and gas division, said the sinkhole could have been caused by structural problems in Texas Brine's salt dome beneath it. Salt cavern is part of Napoleonville salt dome - a massive ancient structure  that Texas Brine Company mines for use with mining petroleum, salt and sulphur. Texas Brine has mined the salt dome since 1973 for brine used by industry, using water to wash out salt deep in the dome and selling the resulting brine mix, company and DNR officials have said. DNR has ordered the Texas Brine Company to drill a well and see if it is the cause of the dark gray water-filled hole nearby. It will take at least 40 days to drill the well.

The potentially failed cavern may also be the source of natural gas that has bubbled up on nearby bayous and from an abandoned water well, emergency preparedness officials said. Texas Brine and other salt dome operators use salt-dome cavities left behind from mining operations to store hydrocarbons such as natural gas for companies that lease the wells. Texas Brine ceased operating the cavern in 2011 and plugged and abandoned the well used to access it, state officials said. 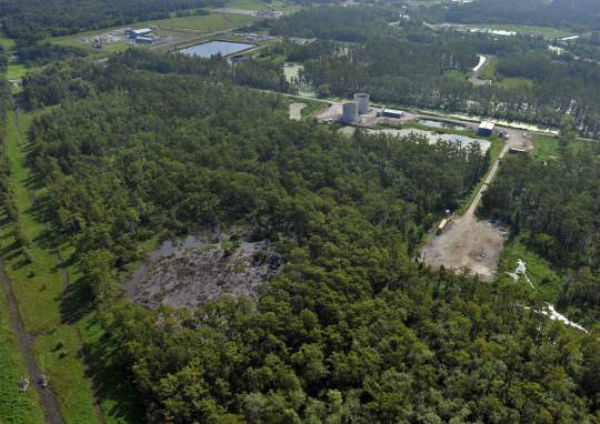 The 1.5 million barrels of liquid butane well and fear of radioactivity

The sinkhole could breach a nearby

There is a well close to the sinkhole, that contains 1.5 million barrels of highly volatile liquid butane. The 1.5 million barrels of liquid butane 458 meters (1500 feet) from the sinkhole could explode with force of more than 100 H-bombs like the ones in Hiroshima and Nagasaki, more than 1.5 times the explosive force of the largest thermonuclear weapon in current service in the U.S. according to article in Examiner.

Inhalation of butane can cause euphoria, drowsiness, narcosis, asphyxia, cardiac arrhythmia, temporary memory loss and frostbite, which can result in death from asphyxiation and ventricular fibrillation. 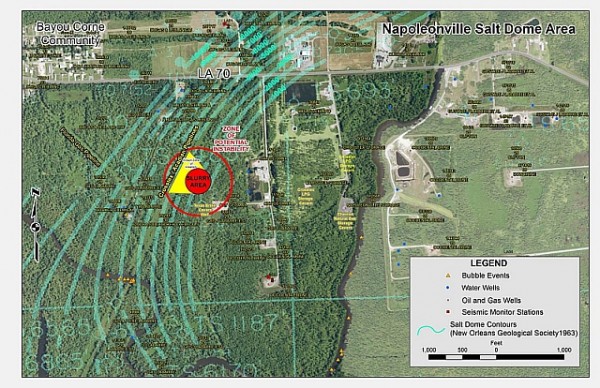 Local residents and sheriff point that the Louisiana Department of Natural Resources knew for months about integrity problems with salt cavern in that area. However, DNR didn’t warn authorities or do anything about it. Lawsuit was filed by landowners of sinkhole surrounding area against DNR and Texas Brine. They claim that their drinking water in Grand Bayou system is now contaminated.

DNR’s Office of Conservation had authorized Texas Brine in 1995 to dispose of naturally occurring radioactive material in cavern that may be closer to the outer wall of the dome  and that has possible fail and created the sinkhole. The Department of Environmental Quality (DEQ) initial readings have not revealed any initial radiation.

“Based on the first round of data, we are confident that the potential exposure of citizens to NORM is not a problem in this matter,” DEQ Secretary Peggy Hatch said in the news release.

Louisiana Environmental Action Network (LEAN) reports that at least twelve areas in and around Bayou Corne and Grand Bayou have bubbles from escaping methane, ethane and propane. Locals have also reported houses shifting and tremors.

Fracking and ongoing frack waste injection storages, extra movement and stress from oil and gas drilling could lead to tremors and minor earthquakes and those events are susceptible to present pressure of earthquakes west of Louisiana. There has been exploration for oil and gas in that area in the past, which would make the presence of low levels of naturally occurring radioactive material (NORM) possible. NORM is often a by-product of oil and gas exploration and production.

Seismometers picked up thousands of quakes in the Assumption Parish disaster area since June, according to seismologist Dr. Stephen Horton. He and colleagues had installed four instruments underground to record quake activities, and since then, two more, each monitored daily. People reported quakes on June 8 and July 3. Quakes ended when bubbling sinkhole developed but seismic signals continue from sinkhole area. There are seismic signals that appear to emanate from the vicinity of the in the Napoleonville salt dome, in the low amplitude range.

Eighty miles west of Bayou Corne is Lake Peigneur that balances above a salt dome that collapsed in 1980 when a drilling rig punctured a protective layer in the salt mine wall, causing the entire lake, including a drilling rig, several larger barges and large chunks of surrounding land to be pulled down into the cavern. Pressure was so great, the bayou ran backwards, created a large waterfall, and was sucked back into the puncture hole. The event permanently affected the ecosystem of the lake by changing the lake from freshwater to saltwater and increasing the depth of part of the lake.

The lake drained into the hole, expanding the size of that hole as the soil and salt were washed into the mine by the rushing water, filling the enormous caverns left by the removal of salt over the years. The resultant whirlpool sucked in the drilling platform, eleven barges, many trees and 260,000 m2 (65 acres) of the surrounding terrain. So much water drained into those caverns that the flow of the Delcambre Canal that usually empties the lake into Vermilion Bay was reversed, making the canal a temporary inlet. This backflow created, for a few days, the tallest waterfall ever in the state of Louisiana, at 164 feet (50 m), as the lake refilled with salt water from the Delcambre Canal and Vermilion Bay. The water downflowing into the mine caverns displaced air which erupted as compressed air and then later as 400-foot (120 m) geysers up through the mineshafts.

Since 1994 AGL Resources has been using Lake Peigneur’s underlying salt dome as a Storage and Hub facility for pressurized natural gas. There is currently concern from local residents to the safety of storing the gas under the lake and nearby drilling operations.