Unusually strong earthquake swarm under El Hierro Island continued today on Canary Islands. A record number of quakes, more than 240, were recorded on June 26, 2012 (most of them larger than M2 and 6 larger than M3), all were at about 18-20 km depth. Since tremor set in again after 16:10 yesterday, quakes migrated to the El Julan area.

There were more than 100 earthquakes so far today and the frequency of earthquakes is also slightly downward. Tremor has decreased but is still present, apparently magma keeps moving somewhere.

Note: The exact number of earthquakes is unknown. What we do know this is much more serious situation than that of last year.

What looked as an almost terminated story was reactivated a couple of weeks ago by some weak earthquake swarms. The activity migrated towards the El Golfo bay where it also began in June/ July 2011.  What we witnessed on Monday was however an exceptional powerful volcanic earthquake swarm without any earlier comparison. 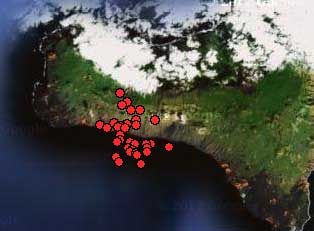 Pevolca called a Yellow alert in the unpopulated earthquake zone on Wednesday, June 27, 2012. In a live interview on RTVC, the local Canary Island TV and Radio station, María José Jurado has declared that the El Julan and La Dehesa area will be labeled as “Yellow Alert” area. Besides a church and a lighthouse, this area is unpopulated. 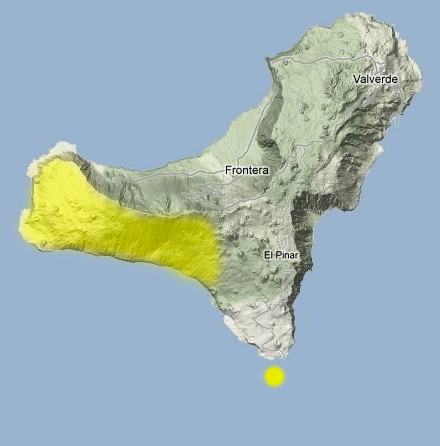 The tremor, a low-frequency ground vibration, is thought to be caused by moving magma. It had been strong yesterday and correlated well with a southward propagation of earthquake locations, suggesting that magma at about 20 km depth flew from underneath the El Golfo area towards the El Julan (south) coast, in a similar way as before the Oct 2011 eruption, but became blocked there, and did not reach the southern rift zone near La Restinga.

Pressure continued to cause wide-spread rock fracturing underground and cause small intrusions of fluids. Now, the re-appearance of tremor could mean that magma is moving again somewhere underneath the island. Where to and whether or not it might reach the surface and initiate a new eruption is difficult to know at the moment. It is essential to continue to monitor location and magnitude of earthquakes.

Deformations, as described in the Involcan maps and report below, are generated by the Magma pressure and are one of the major indications to predict eruptions. Together with the strength of the earthquakes, the depth of the hypocenters and the emitted gases, they are used by volcanologists to send alerts and warnings to the public. The mitted gases are the uncertain factor in this case but didn’t we hear a couple of months ago that some sampling points were dismantled?

INVOLCAN, partner in the PEVOLCA steering group has taken the initiative to send an informative note to a lot of people.  Involcan is not longer tied to the poor communication of Pevolca and is alerting the island about much more stronger deformation than seen in 2011.

We urgently inform you about the observed shift of the GPS network Canaria (Nagoya Univ ITER + + GRAFCAN) who is operating the Instituto Volcanológico de Canarias under the direction of Dr. Takeshi Sagiya (Professor of Nagoya University and Scientific Collaborator INVOLCAN).

During the last 2 days there has been horizontal eastward displacement of 2 cm and northward of 3 cm. The vertical displacement was 2 cm.
These data clearly reflect deformación (a process of movement of magma underground and the source responsible for this deformation is in the central-western part of the island of El Hierro) in conjunction with data from recent seismic activity.

The movements recorded during the last 2 days are real and much faster than those observed last year 2011.

The situation is ongoing, important updates will follow. Earthquake-report.com has indepth coverage of the status, and is updated several times during the day.