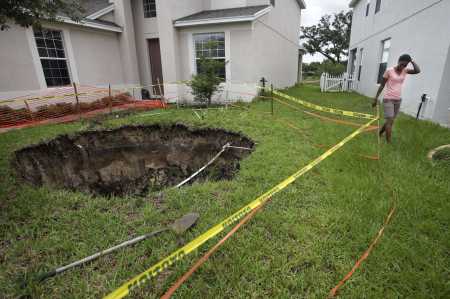 The state of Florida in the USA is known for having frequent sinkholes, especially in the central part of the state.

A sinkhole, also known as a sink, snake hole, swallow hole, swallet, doline, or cenote, is a natural depression or hole in the Earth’s surface caused by karst processes — the chemical dissolution of carbonate rocks or suffosion processes for example in sandstone. Sinkholes may vary in size from 1 to 600 meters (3.3 to 2,000 ft) both in diameter and depth, and vary in form from soil-lined bowls to bedrock-edged chasms. Sinkholes may be formed gradually or suddenly, and are found worldwide. The different terms for sinkholes are often used interchangeably.

In Spring Hill, a sinkhole opened up Tuesday, June 26, 2012 morning along Quality Drive, collapsing the road and closing it between Spring Hill Regional Hospital and Suncoast Elementary School.

In Hudson, a 4-foot-wide hole opened up  on Majestic Boulevard just north of State Road 52, where the road becomes a bridge over the filled-to-the-brim Bear Creek. The hole closed the road as it heads into the Beacon Woods neighborhood.

In Hernando County, Mariner Boulevard near Claymore Street remained closed Tuesday morning after several large sinkholes opened up in the area on Monday.

Sinkholes were also reported at the Hernando County Airport on Taxiway A, the taxi strip that parallels the main runway, but the airport remained open.

The Hernando County Sheriff’s Office reported about 30 new in the area of Mariner Boulevard and Claymore Street.

On June 21, 2012 a part of a house was swallowed up after a huge sinkhole opened underneath it in Hudson. Neighbors described the rear of the property in Hudson sinking into an ever-widening hole Wednesday as people were evacuated from nearby homes. Pasco County homes were prone to sinkholes.