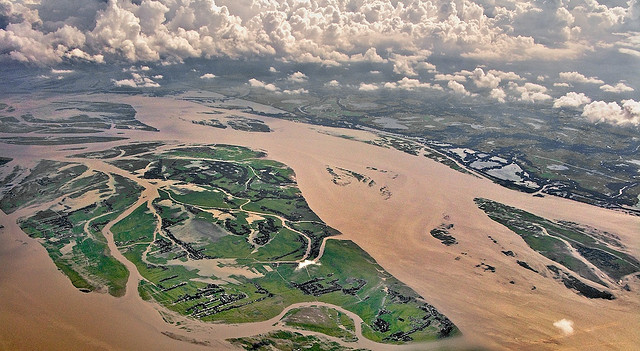 Days of rain in Bangladesh, some of the heaviest in years, have set off flash floods and landslides, killing at least 70 people and stranding about 200,000, police and officials said on Wednesday, June 27, 2012.

According to National Geographic, Bangladesh ranks first as the most vulnerable nation to the impacts of climate change in the coming decades.

Low-lying and densely populated Bangladesh is battered by torrential downpours during the wet season, which began in the past few weeks. At least 15 people were killed in and around the southeastern port city of Chittagong, while 30 died in Bandarban in an area known as the Chittagong Hill Tracts.

Most of the deaths were caused by landslides, others by wall collapses, lightning strikes and surges of water. Army, police and fire brigade personnel were helping in rescue efforts. In Sylhet, a rice and tea growing area in the northeast, houses stood up to three feet (one meter) under water, with residents perched on boats or scrambling to high ground. Three children were reported killed.

Five days of rain had beset wide areas near the border with Myanmar and India, with the weather office recording 463 mm (18.2 inches) in Chittagong over the past 24 hours. “We are having the worst rainfall in many years,” said Jainul Bari, district commissioner for Cox’s Bazar.

Weather officials said more heavy rain was expected in the next few days. Disaster control officials said about 150,000 people had been marooned by the floods in the southeast while 50,000 were stranded in Sylhet.

Hundreds of homes have been washed away, while authorities moved hundreds of families from shanty housing and told others to leave quickly. Agriculture officials said it was too early to estimate crop damage. “In flash floods, water recedes soon after the rain stops, So we don’t anticipate any major damage to rice and other crops,” one official said. Most road and rail links between Chittagong and the rest of the country were suspended late on Tuesday, while Chittagong airport was closed after water inundated part of the runway.

The South Asian country of Bangladesh is prone to the natural disaster of flooding due to being situated on the Ganges Delta and the many tributaries flowing into the Bay of Bengal. The coastal flooding twinned with the bursting of Bangladesh’s river banks is common and severely affects the landscape and Bangladeshi society.

75% of Bangladesh is less than 10m above sea level and 80% is flood plain, therefore rendering Bangladesh a nation very much at risk of further widespread damage despite its development. Whilst more permanent defences, strengthened with reinforced concrete, are being built, many embankments are composed purely of soil and turf and made by local farmers. Flooding normally occurs during the monsoon season from June to September during the monsoon. The convectional rainfall of the monsoon is added to by relief rainfall caused by the Himalayas. Melt-water from the Himalayas is also a significant input and flood every year.

Each year in Bangladesh about 26,000 km2, (around 18%) of the country is flooded, killing over 5,000 people and destroying 7 million homes. During severe floods the affected area may exceed 75% of the country, as was seen in 1998. This volume is 95% of the total annual inflow. By comparison, only about 187,000 million m3, of streamflow is generated by rainfall inside the country during the same period. The floods have caused devastation in Bangladesh throughout history, especially during the years 1966, 1987, 1988 and 1998. The 2007 South Asian floods also affected a large portion of Bangladesh.

Featured image: “Approaching Dhaka” – Michael Foley Photography – via Fickr – CC BY-NC-ND 2.0; Caption: “You should take a picture of this place and show it to people driving big cars in your country. Tell them it is a preview of what South Florida will look like in 40 years.” – Samir Ranjan gayen, Executive Director of a Bangladesh Non-profit, quoted in National Geographic, May 2011, pg 80