The annual Quadrantids are the first meteor shower in 2013 and it will peak overnight, or more precisely, the first six hours of the morning of January 3rd. Unfortunately, the northern-hemisphere’s Quadrantid maximum, due around 13:30 UTC on January 3, has a waning gibbous Moon ( located near the Leo-Virgo border) which will create severe problems during the second half of the night, when the shower’s radiant is properly observable.

Northern hemisphere skywatchers will have best conditions. Observers south of the equator will have little chance of seeing any meteors since the radiant will not clear the horizon before morning twilight interferes. Radiant is down low on the northern horizon until about midnight, rising slowly higher as the night progresses. The Quadrantids can be seen as far as latitudes north of 51 degrees south. Its peak is not as consistent as other showers. The maximum rate is expected to be about 80 -120/hour. The peak rate of the Quadrantids has varied between 60-200. 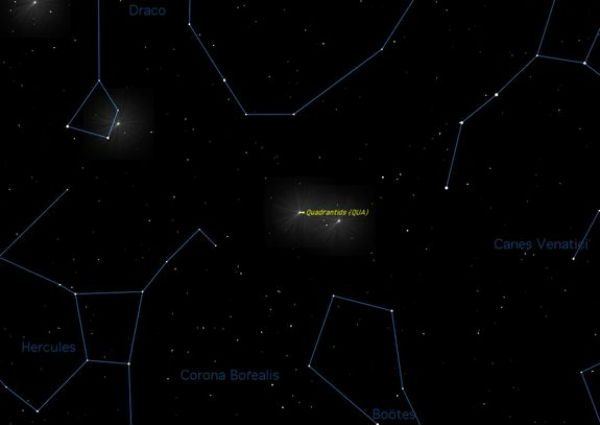 The Quadrantid meteor shower occurs when the Earth passes through a stream of dust from the asteroid 2003 EH1, which is believed to  be  the burnt out core of the lost comet C/1490 Y1. Dynamical studies suggest that this body could be a piece of a centuries old broken comet.  After hundreds of years orbiting the sun, Quadrantids will enter our atmosphere at 90,000 mph, burning up 50 miles above Earth’s surface.

The radiant of the Quadrantids is in the constellation of Boötes. The Quadrantids derive their name from the constellation of Quadrans Muralis, located between the constellations of Bootes and Draco, which represents an early astronomical instrument used to observe and plot stars. It was first observed in 1825  by Adolphe Quetelet of Brussels Observatory. The International Astronomical Union phased out Quadrans Muralis in 1922, so it is no longer recognized by astronomers, however, this meteor shower kept its name after it.

A live webcast of the Quadrantid meteor shower from January 2 to 4 is provided by scientists at NASA’s Marshall Space Flight Center via an all-sky camera outside the space center in Huntsville, Alabama.

Featured image: The slow-moving meteor was recorded in an all-sky camera at the Marshall Space Flight Center in 2012 (Credit: NASA/MSFC/Meteoroid Environments Office/Bill Cooke and Danielle Moser)