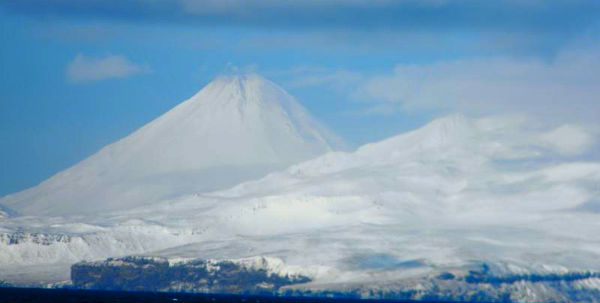 Elevated surface temperatures were detected in satellite images of Cleveland volcano over the last 24 hours. The aviation color code and volcano alert level were changed to ORANGE/WATCH based on evidence that a new dome has formed in the summit crater of Cleveland. The dome is about 100 m in diameter and presumably formed starting January 24, 2013 when elevated surface temperatures were observed in satellite images.

The development of a lava dome in the summit crater indicates that sudden explosions of blocks and ash are possible with little or no warning. Ash clouds, if produced, could exceed 20,000 feet above sea level. 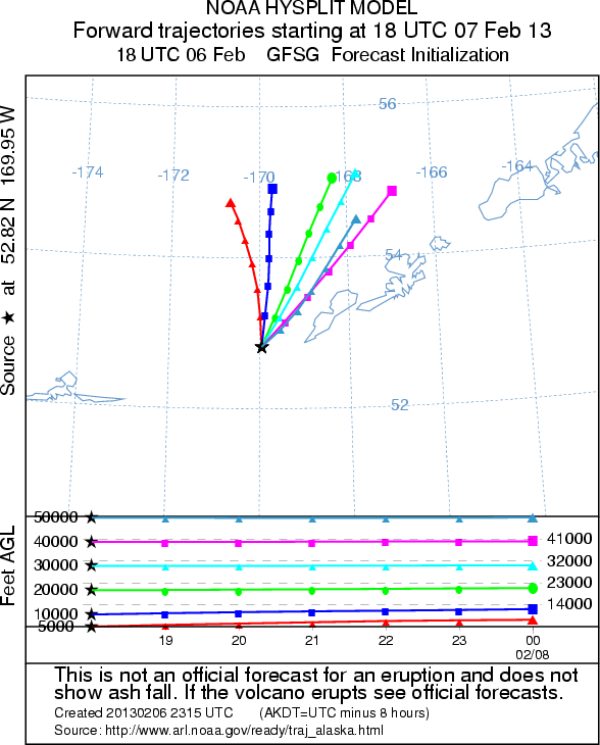 Satellite data obtained on January 30, 2013 indicate that a lava dome has grown in the summit crater of Cleveland volcano warranting a change in aviation color code and volcano alert level. As of January 30, 2013 the dome was about 100 m in diameter. The size and shape of the dome appears to be unchanged through February 2, 2013 according to the most recently available satellite data. AVO has received no reports of activity or ash emissions since elevated surface temperatures were first observed around the January 24, 2013.

If a large ash-producing event occurs, nearby seismic, infrasound, or volcanic lightning networks should alert AVO staff quickly. However, for some events, a delay of several hours is possible. There is no real-time seismic monitoring network on Mount Cleveland and AVO is unable to track activity in real time. 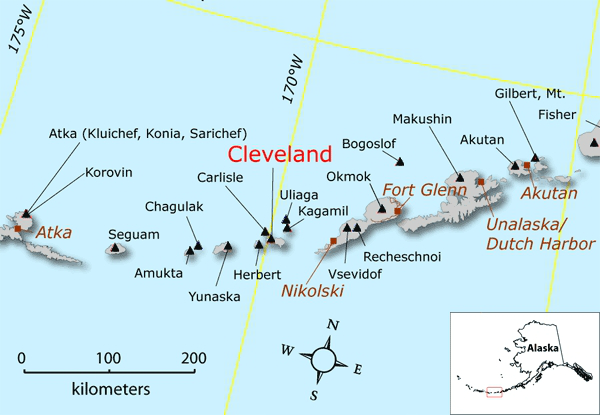 Location of Cleveland volcano and other Aleutian volcanoes with respect to nearby cities and towns. (Credit: Janet Schaefer/Image courtesy of the AVO/ADGGS)

Cleveland volcano forms the western half of Chuginadak Island, a remote and uninhabited island in the east central Aleutians. It is located about 75 km (45 mi.) west of the community of Nikolski, and 1500 km (940 mi.) southwest of Anchorage. The volcano’s most recent significant eruption began in February, 2001 and it produced 3 explosive events that produced ash clouds as high as 12 km (39,000 ft) above sea level. The 2001 eruption also produced a rubbly lava flow and hot avalanche that reached the sea. The most recent minor ash emissions were observed in November 2012. 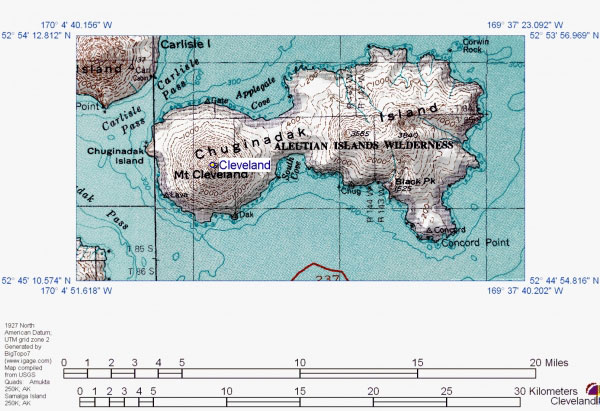 Featured image: Photo of Mt Cleveland taken at 1800 GMT on 11 Mar 2012 by Lt. Matthew Davis aboard the NOAA ship Oscar Dyson. Photo taken while transiting north through Samalga pass while on fisheries survey. Several small explosions were detected in several days prior to the time of the photo, but very little ash is observed on the upper flanks.