Dust from West Africa over the Atlantic Ocean

Dust hovered over the Atlantic Ocean in early January 2013, continuing an intermittent pattern of dust-storm activity in the region. A veil of dust stretched from the coast of Mauritania westward to Cape Verde.

Sand seas cover most of Mauritania and parts of Western Sahara. Some of the dust might have arisen in Mauritania, but also may have traveled from farther inland, such as Mali. Dust-choked winds are recurring natural hazards in both countries. 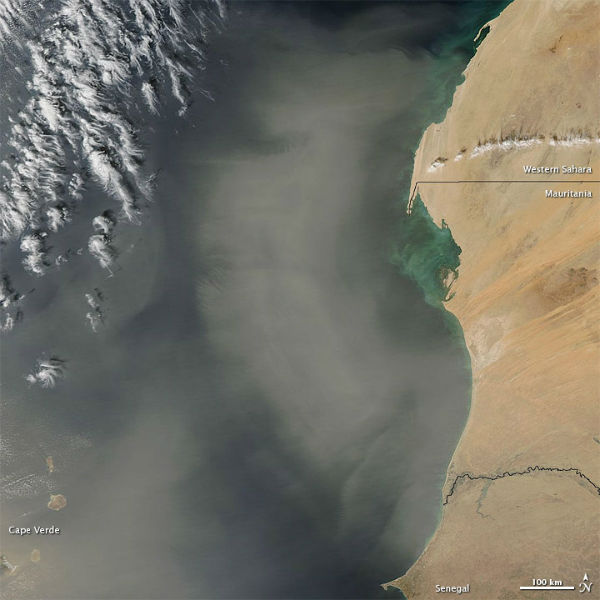 At least 230 people have lost their lives in flood and landslide events due to severe weather in central Vietnam this month, Prime Minister Nguyen Xuan Phuc said Friday, October 30, 2020. This included 14 confirmed fatalities from two major landslides triggered by...

Typhoon "Goni" -- named Rolly in the Philippines -- has rapidly intensified into the strongest storm of the year as it moved westward over the Philippine Sea, according to the bulletin issued by weather bureau PAGASA at 09:00 UTC (17:00 LT) on Friday,...

The first snowfall of the season has arrived in Chihuahua, Mexico, on October 27, 2020, accompanied by rains and below-freezing temperatures as low as -8 °C (17.6 °F). According to meteorologists, the phenomenon was unusual for the month of October. While...

Exceptionally massive hail strikes Tripoli, Libya - possibly one of the largest on record

Libya's capital Tripoli was hit by a sudden storm on Tuesday, October 27, 2020, which generated exceptionally massive hail measuring more than 20 cm (8 inches) in diameter. Reports indicate that the hail could be one of the largest on record, along with the 2010...

Montana records coldest temperature ever this early in the season in contiguous U.S.

The station in Potomac, Montana reported a temperature of -33 °C (-29 °F) on Sunday morning, October 25, 2020-- the coldest ever temperature in the contiguous U.S. this early in the season, the National Weather Service (NWS) confirmed. "It's...

Fast-moving Hurricane "Zeta" made landfall at its peak strength near Cocodrie in southeastern Louisiana at 21:00 UTC on October 28, 2020. Its maximum sustained winds of 175 km/h (110 mph) at the time of landfall placed it on the upper edge of a Category 2...

A Coronal Mass Ejection (CME) produced by a C4.3 flare at 06:16 UTC on October 27, 2020, was analyzed by the SWPC and determined to be a possible glancing blow on November 1. The source of the flare was a large AR 2778 which produced multiple B- and C-class flares...

The Icelandic Met Office (IMO) is reporting significant ground deformation associated with a series of earthquakes that occurred on the Reykjanes Peninsula, between Fagradalsfjall and Kleifarvatn, from October 16 to 22, 2020. The largest quake in the series was...