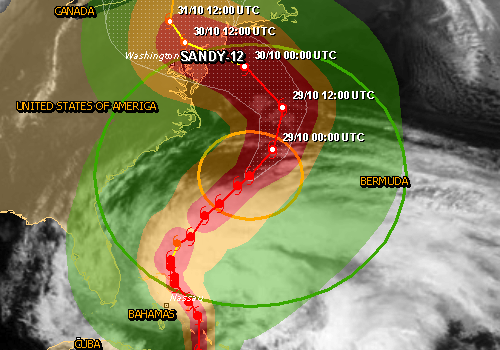 Storm response crews from the U.S. Geological Survey are installing more than 150 storm-tide sensors at key locations along the Atlantic Coast — from the Chesapeake Bay to Massachusetts — in advance of the arrival of Tropical Storm Sandy. 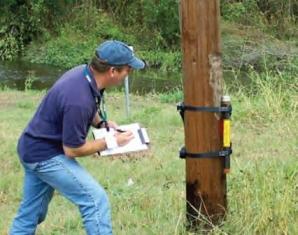 Working with various partner agencies such as NOAA, FEMA, and the U.S. Army Corps of Engineers, the USGS is securing the storm-tide sensors, frequently called storm-surge sensors, to piers and poles in areas where the storm is expected to make landfall. The instruments being installed will record the precise time the storm-tide arrived, how ocean and inland water levels changed during the storm, the depth of the storm-tide throughout the event, and how long it took for the water to recede.

Storm surge is an abnormal rise of water generated by a storm, over and above the predicted astronomical tides. Storm surge should not be confused with storm tide, which is defined as the water level rise due to the combination of storm surge and the astronomical tide. This rise in water level can cause extreme flooding in coastal areas particularly when storm surge coincides with normal high tide, resulting in storm tides reaching up to 20 feet or more in some cases.

“In the hours and days before Irene made its epic sweep up the eastern seaboard last year, USGS deployed a record number of storm-surge sensors that yielded important new information on storm tides along some of the most populated coastline in the United States,” said USGS Director Marcia McNutt. “Now with Sandy we have the opportunity to test and improve predictive models of coastal zone impact based on what we previously learned.”

Storm-tides are increases in ocean water levels generated at sea by extreme storms and can have devastating coastal impacts.   In locations where tidal forecasts are known, the sensors being installed can also help determine storm surge.  For differences between storm-surge and tidal-surge, visit the National Hurricane Center’s website.

This information will be used to assess storm damage, discern between wind and flood damage, and improve computer models used to forecast future coastal inundation.

In addition, rapid deployment gauges will be installed at critical locations to provide real-time information to forecast floods and coordinate flood-response activities in the affected areas. The sensors augment a network of existing U.S. Geological Survey streamgages, which are part of the permanent network of more than 7,500 streamgages nationwide.

Of the sensors deployed specifically for Sandy, eight have real-time capability that will allow viewing of the storm-tide as the storm approaches and makes landfall.  Besides water level, some of these real-time gauges include precipitation and wind sensors that will transmit all data hourly.  All data collected by these sensors and the existing USGS streamgage network will be available on the USGS Storm-Tide Mapper link at www.usgs.gov/hurricanes.

Providing information to support future forecasts could ultimately save lives during future storms. These sensors were deployed for the first time during Hurricane Rita in 2005. Before then, scientists had limited data available to study the effects of storm surge. 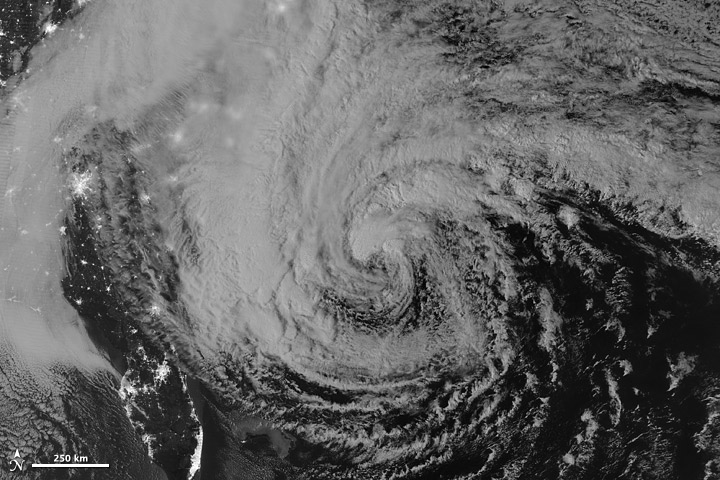 The USGS studies the impacts of hurricanes and tropical storms to better understand potential impacts on coastal areas. Information provided through the sensor networks provides critical data for more accurate modeling and prediction capabilities and allows for improved structure designs and response for public safety.

The USGS also continuously monitors water levels and flows at thousands of the nation’s streams on a real-time basis.

Tropical Cyclone SANDY-12 can have a medium humanitarian impact based on the maximum sustained wind speed and the affected population and their vulnerability.

Updated: this report is based on advisory number 25.

– For differences between storm-surge and tidal-surge, visit the National Hurricane Center’s website.
– All data collected by these sensors and the existing USGS streamgage network will be available on the USGS Storm-Tide Mapper link at www.usgs.gov/hurricanes.
– The public can access this information for their area at the USGS Current Streamflow Conditions web page.
– USGS WaterAlert allows users to receive a text or email from the USGS when waters are rising in rivers and streams near them.For the latest forecasts on the storm, listen to NOAA radio.  For information on preparing for the storm, visit Ready.gov or Listo.gov