EMSC reported this earthquake as magnitude 5.8 with depth of 5 km.

The October 28th, 2012 (October 27 at the location of the epicenter) M 7.7 earthquake south of Masset, Canada, occurred as a result of oblique-thrust faulting near the plate boundary between the Pacific and North America plates. At the location of this event, the Pacific plate moves approximately north-northwest with respect to the North America plate at a rate of approximately 50 mm/yr.This earthquake is likely associated with relative motion across the Queen Charlotte fault system offshore of British Columbia, Canada. Studies of tectonics in this region suggest plate motions are taken up by strike slip faulting parallel to the plate boundary, accompanied by lesser amounts of thrust motion to accommodate the oblique nature of the plate motion vector between the two plates with respect to the orientation of the main plate boundary fault structure. This oblique component of plate motion may involve either underthrusting of the western edge of the Pacific Plate beneath North America, or be taken up on crustal faults within the North America plate. The October 28th earthquake is consistent with either scenario. Its rupture extended approximately 100-150 km along strike, along the shallow extent of the source fault. Slip amounts reached approximately 5m, in a patch to the south of the epicenter. Aftershocks delineate the rupture well, as shown here.

This region of the Pacific:North America plate boundary has hosted 7 earthquakes of magnitude 6 or greater over the past 40 years – the largest of which was a M 6.6 earthquake in 2009, 80 km to the south east of the 2012 earthquake. In 1949, a M 8.1 earthquake occurred closer to the Pacific:North America plate boundary, likely as a result of strike-slip faulting, approximately 100 km northwest of the October 28th earthquake, near the northern extent of Haida Gwaii region (formerly Queen Charlotte Islands). Summary report. 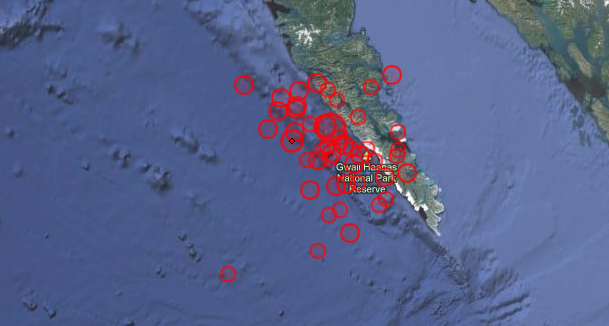