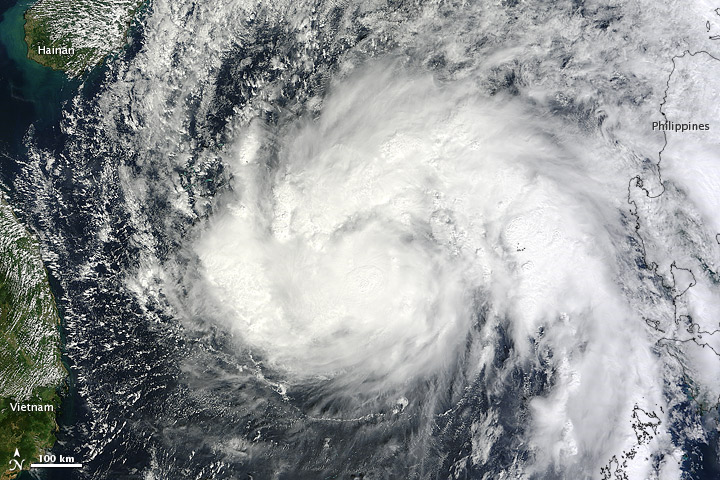 Typhoon Son-Tinh struck Vietnam at about 0:00 UTC on October 28, 2012. Data supplied by the US Navy and Air Force Joint Typhoon Warning Center suggest that the point of landfall was near 19.6 N,106.9 E. Son-Tinh brought 1-minute maximum sustained winds to the region of around 185 km/h (114 mph). Wind gusts in the area may have been considerably higher. 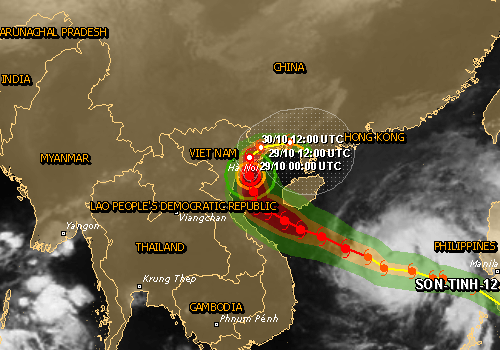 Son-Tinh formed as a tropical depression over the western Pacific Ocean on October 23 and strengthened into a storm the next day. On October 26, the U.S. Navy’s Joint Typhoon Warning Center (JTWC) reported that Son-Tinh was located about 355 nautical miles (655 kilometers) east of Hue, Vietnam. The storm had maximum sustained winds of 60 knots (110 kilometers per hour) and gusts up to 75 knots (140 kilometers per hour). Son-Tinh was expected to gain strength over the next 24 hours, and the JTWC projected storm track showed the storm moving toward the northwest, making landfall in Vietnam.

According to the Saffir-Simpson damage scale the potential property damage and flooding from a storm of Son-Tinh’s strength (category 3) at landfall includes:

GDACS reported that Tropical Cyclone SON-TINH-12 can have a high humanitarian impact based on the Maximum sustained wind speed and the affected population and their vulnerability.

Updated: this report is based on advisory number 20.

Xinhua reported that five people were missing after Typhoon Son-Tinh sank their boat in the South China Sea near the city of Sanya on Sunday, maritime authorities said.

Local sea rescue center in Sanya, Hainan Province, received a report at about 6 a.m. saying an unpowered engineering vessel half-sanked near a cargo terminal of Sanya after being hit by strong winds.

Five crew members were awaiting rescue as they clung to the deck that remained above the sea, the report said.

The provincial civil affairs bureau said Sunday that 82,326 people have been moved to temporary shelters, where water, food and medicine have been provided.

The provincial transportation department said the suspension of train services and shipping across the Qiongzhou Strait, which links Hainan island with Guangdong province, will continue due to high winds and rains.

The storm evolution is shown in the table below. Alert levels and population estimates are related to the area from a point to the next. Source: GDACS

Featured image: Tropical Storm Son-Tinh blew over the South China Sea, midway between the Philippines and Vietnam, on October 26, 2012. The Moderate Resolution Imaging Spectroradiometer (MODIS) on NASA’s Terra satellite took this picture the same day. Although Son-tinh did not boast a distinct eye, it still had the apostrophe shape typical of a strong storm.

The terms “hurricane” and “typhoon” are regionally specific names for a strong “tropical cyclone”.