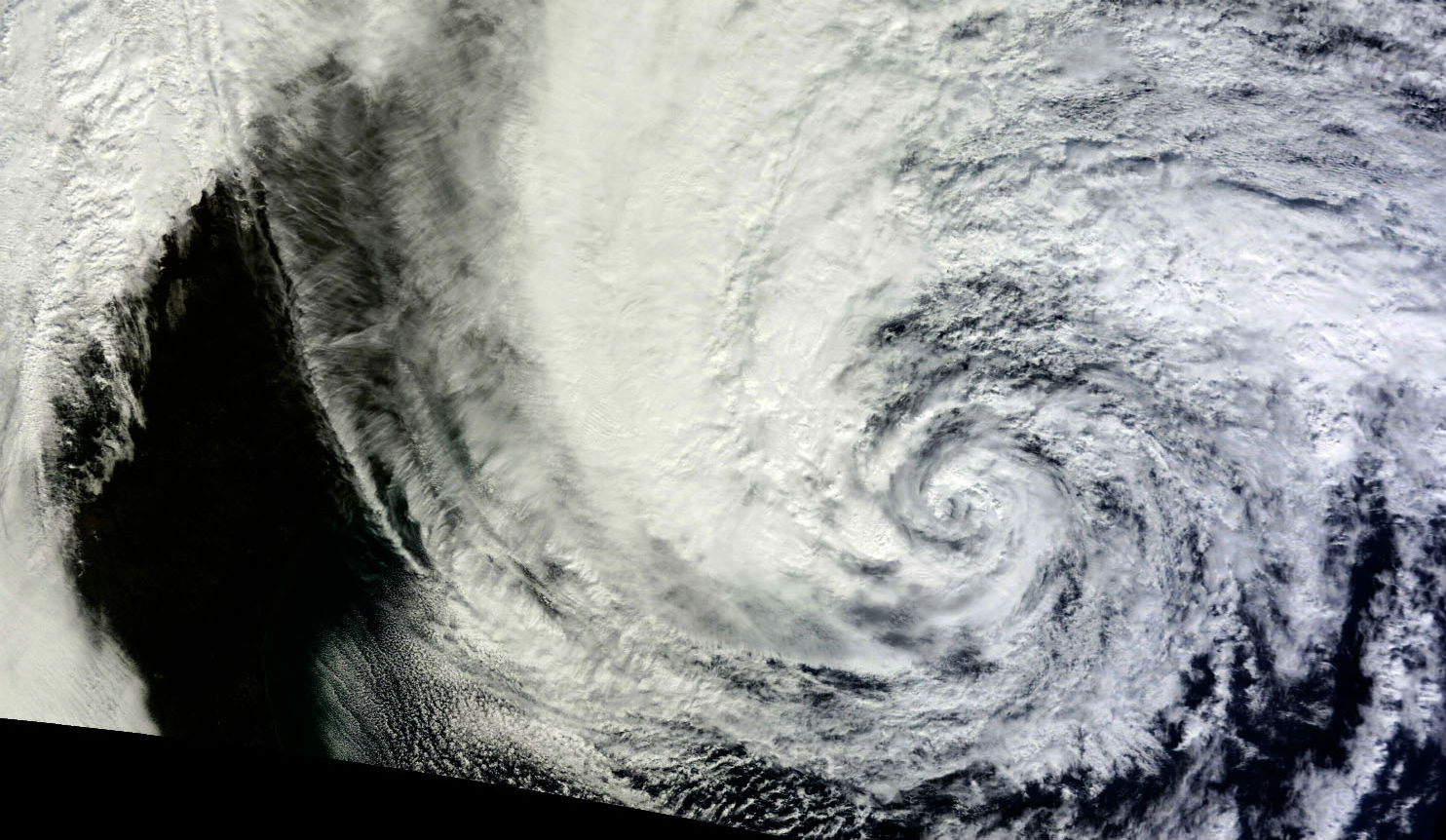 Sandy is now post-tropical cyclone. Regardless its hurricane status, Sandy, dubbed Frankenstorm, is a massive system that will affect a huge swath of the eastern U.S. It is now evident that it may become the biggest storm of century. The circulation of Sandy could cover each of the 26 states east of the Mississippi River by Tuesday! Winds and clouds from Hurricane Sandy could stretch across the eastern third of the United States, according to weather predictions from the National Hurricane Center (NHC).

Dawn to Dusk: Hurricane Sandy, October 28, 2012, Super Rapid Scan
This time-lapse animation above shows Hurricane Sandy from the vantage point of geostationary orbit—35,800 km (22,300 miles) above the Earth on October 28, 2012. Light from the changing angles of the sun highlight the structure of the clouds. The images were collected by NOAA’s GOES-14 satellite. The “super rapid scan” images—one every minute, reveal details of the storm’s motion. The video above shows Hurricane Sandy’s development on October 29, recorded from 11:15:00 UTC till 21:21:00 UTC.

Sandy is progressing into an extra-tropical cyclone as it gets farther north, and tapping into the power of the jet stream, which ferries air from west to east over North America. The jet stream, like the storm itself, is powered by this temperature difference between air masses, according to  Chris Davis, a scientist with the University Corporation for Atmospheric Research in Boulder, Colorado. Sandy is also deriving power from the movement of warm air to the north and cold air to the south, similar in some respects to the Perfect Storm of 1991. What we are seeing now from Sandy is a rare mix of a hurricane and a cold front jet stream. The upper level wind  is merging with the tropical system creating a “monstrous hybrid vortex” – a combination of a hurricane and a nor’easter according to Weather Channel hurricane specialist Bryan Norcross.

Weather experts agree that there has never been a storm like Hurricane Sandy in the history of modern meteorology.

How big is Sandy?

Sandy’s winds cover an area of more than 1,000 miles (1610 km) in diameter. Sandy now has the largest tropical storm-force wind field of any Atlantic tropical cyclone since 1988, topping Olga when it was a subtropical storm in 2001 according to Dr. Jeff Masters of Weather Underground. Olga’s winds extended out 600 miles (965 kilometers).

Let’s see some peak diameters of large hurricanes and their tropical wind extensions. Probably the largest was Isabel in 2003 which grew up to 575 miles (925 km) in diameter. Isabel’s hurricane-force wind field reached a diameter of 230 miles (370 km) before making landfall in September 2003. Hurricane Ike reached 485 miles (780 km) in diameter in 2008 and devastating Katrina peaked with 435 miles (700 km) in diameter in 2005. Last year, Irene’s wind field extended up to 460 miles (740 km) in diameter. Hurricane Sandy is wider and stronger than Hurricane Irene, which caused more than $15 billion in damage in 2011, and could rival the worst East Coast storm on record. Total damage from Hurricane Sandy may well exceed Katrina’s $96 billion. This could be the first $100+ billion storm in U.S. history. 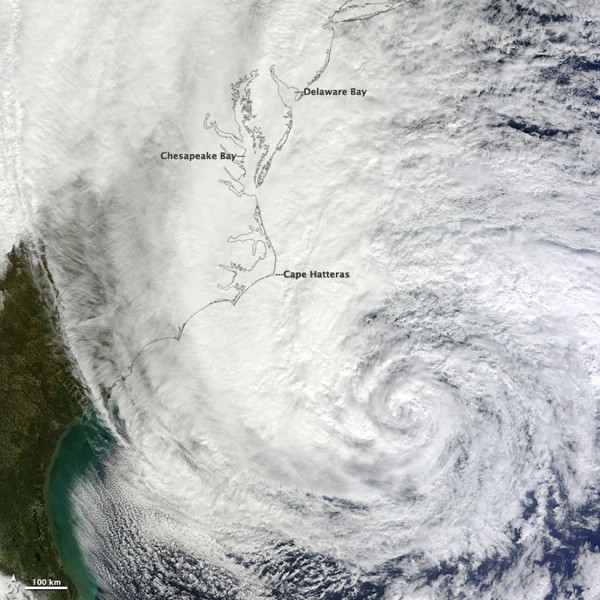 Sandy reached minimum central pressure of 938 mB. If Sandy reaches 934, she will be one of only 19 Atlantic hurricanes to achieve pressure that low, none of which had that pressure north of the Outer Banks. Northwest Atlantic pressure record is set by Hurricane Gladys in 1975, reaching 939 mB. According to AccuWeather Virginia, Maryland, Delaware and New Jersey would break their all-time pressure records. New York City, Block Island, RI and Nantucket, MA would break their all-time low pressure readings.

“If this all happens as forecasted, and you and your family are stuck in the cold and dark without food and light and communications because you didn’t run to the store and get ready, excuses are going to be spectacularly hard to come by.” – Bryan Norcross, hurricane specialist for The Weather Channel

There will be some far-reaching effects aside from the most destructive impacts of storm surge flooding and high winds in the Northeast closer to the center of circulation. Sandy’s wind field will grow larger as the system begins to interact with a dip in the polar jet stream, deepening low pressure at the surface. It’s expected to change from a tropical storm powered by warm ocean water to something more like a winter storm powered by temperature and pressure differences in the atmosphere. Forecasters say Sandy may actually gain strength slightly as it reaches land, it will remain strong enough once on land to produce strong winds far inland. Wind damage will spread well inland, especially over higher terrain, due to the extremely large size of Sandy. In some areas, sustained winds of 30 to 50 mph could last for more than 24 hours. Gusts may top 80 mph in some locations. Lakeshore flood warnings have been hoisted on parts of the Great Lakes including Chicago. 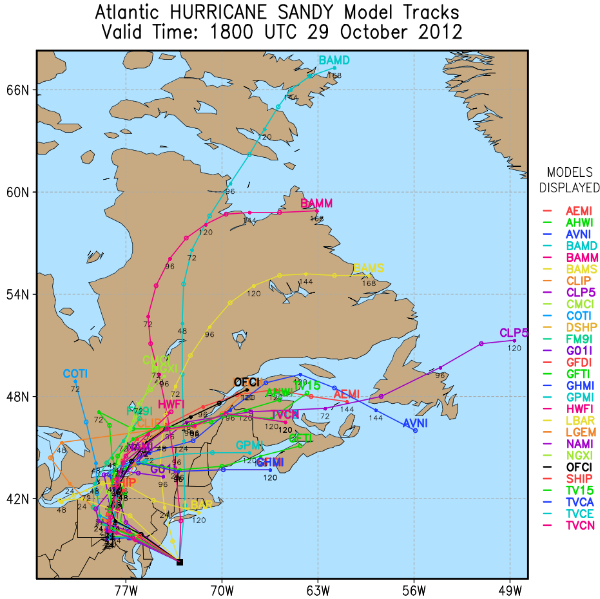 Cold Arctic air coming south from Canada also is expected to merge with Sandy, which will strengthen the storm further and create winter storm conditions. Sandy will bring cold air and snow as well as wind and rain. Forecasters expect Sandy to meet a mass of very cold air from a winter storm about the time it reaches land. This cold air will be incorporated into the hurricane, which means in some places torrential rains will be followed by temperatures in the 20s. Sandy is expected to produce two feet of snow or even more in parts of West Virginia. So the problems of extreme winter and summer weather will be wrapped into one storm.  The combination of snow and strong winds will damage trees and cause power outages. The heavy, wet nature of the snow could cause some structural damage and roof collapses. The snow will continue for several days wrapping around Sandy’s circulation as it winds down slowly.

Heavy snow and strong winds will cause statewide power outages. Millions of people are expected to lose power at some point during Sandy and many will likely not have power restored for many days. That could be a major concern, especially in terms of heating. 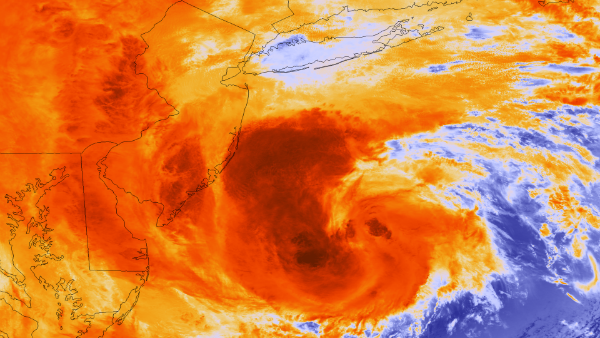