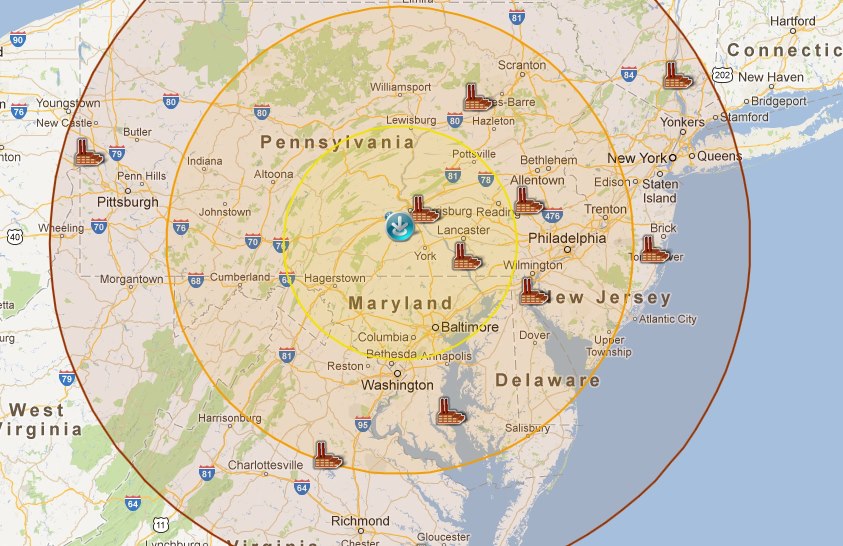 Hurricane Sandy forced three nuclear power plants to shut and put another on alert as federal regulators dispatched inspectors to monitor 11 facilities in the path of the storm.

(1) An alert was declared at the Oyster Creek nuclear power plant in New Jersey because of water exceeding certain high water level criteria in the plant’s water intake structure, according to the U.S. Nuclear Regulatory Commission. An “unusual event” was declared around 7 p.m., local time, on Monday, October 29, 2012. The situation was upgraded to an “alert” about two hours later. Water level was rising in the intake structure due to a combination of a rising tide, wind direction and storm surge, according to the NRC.

(2) Public Service Enterprise Group Inc. (PEG) manually closed its 1,174-megawatt Salem Unit 1, about 18 miles south of Wilmington, Delaware, when four of six circulating pumps were no longer available because of weather, according to Joe Delmar, a company spokesman. The unit operated at full power yesterday, while unit 2 was shut for refueling.

(3) Nine Mile Point in Scriba, New York, was automatically shut down after a power disruption to a switchyard, the U.S. Nuclear Regulatory Commission said. Energy Corp.’s Indian Point 3 nuclear plant in New York also automatically closed at 10:41 p.m. yesterday because of power-grid issues from the storm, Neil Sheehan, an NRC spokesman based in King of Prussian, Pennsylvania, said today.

The Washington-based NRC sent inspectors armed with satellite phones to facilities from Maryland to Connecticut and said all plants remain in a safe condition. Procedures require plants to shut before winds are forecast to exceed hurricane force, the commission said in a statement yesterday.

The US Nuclear Regulatory Commission (NRC) is monitoring the storm from an incident response centre at its Region I office in Pennsylvania and from its operations centre at its Maryland headquarters.

Sandy made landfall in New Jersey on Monday evening with 128 km/h (80 mph) sustained winds and cut power to more than 6 million homes and businesses from the Carolinas to Ohio. It continued on its path Monday and Tuesday, forcing the shutdown of mass transit, schools and financial markets, sending coastal residents fleeing, and threatening a dangerous mix of high winds and soaking rain.

At least 17 people were killed in seven states.