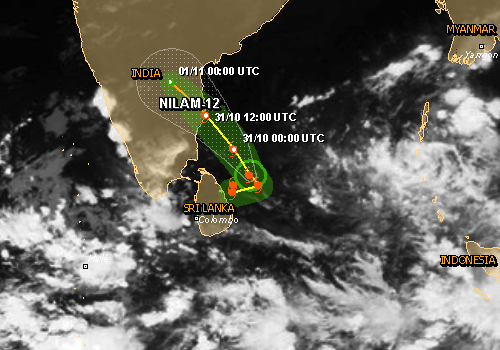 By JTWC report issued 15:00 UTC (October 30, 2012) Nilam was located approximately 265 NM southeast of Chennai, India, and has tracked northwestward at 06 knots over the past 6 hours. Animated multispectral satellite imagery along with microwave image revealed a broad yet defined low-level circulation center with deep central convection displaced to the west.

The Indian Meteorological Department (IMD) said the system was expected to move north-northwest and cross the coast near Chennai by the evening of October 31, 2012.

A bulletin issued by Area Cyclone Warning Centre said that ‘Nilam’, located over southwest Bay of Bengal, remained practically stationary and lay centered at 11:30 hours IST of today, October 30, 2012 about 500 km south-southeast of Chennai and 100 km east-northeast of Trincomalee (Sri Lanka). The system would move northwestwards and cross north Tamil Nadu and adjoining south Andhra Pradesh coast between Cuddalore and Nellore near Chennai by October 31, 2012 afternoon/evening.

Squally winds speed reaching 45-55 km/h gusting to 65 km/h would prevail along and off north Tamil Nadu, Puducherry and adjoining south Andhra Pradesh coasts during next 06 hours. The wind speed would gradually increase thereafter as the system comes closer to coast, becoming 80-90 km/h at the time of landfall.

Sea condition will be very rough to high along and off north Tamil Nadu, Puducherry and adjoining south Andhra Pradesh coasts during next 36 hours.

Storm Surge: Storm surge of about 1 -1.5 metre over the astronomical tide is likely to inundate the low-lying areas of Chennai, Kanchipuram & Tiruvallur of Tamilnadu and Nellore district of Andhra Pradesh.

Damage expected as the cyclone approaches near the coast: Damage to thatched huts. Uprooting of small trees. Breaking of tree branches causing minor damage to power and communication lines at the time of landfall.

Over the last 24 hours, the northern coastal districts of Tamil Nadu, including Chennai, Kancheepuram and Cuddalore, received up to 15 centimeters (5.9 inches) of rain in some areas.

According to the IMD, a deep depression, a condition that precedes cyclonic winds, was noticed around the Bay of Bengal on Tuesday at 5:30 a.m. Indian Standard Time. In about three hours, the speed of wind exceeded 34 knots, about 63 kilometers per hour, the benchmark at which the storm can be classified as a cyclone.

Weather conditions are expected to be calmer by Thursday.