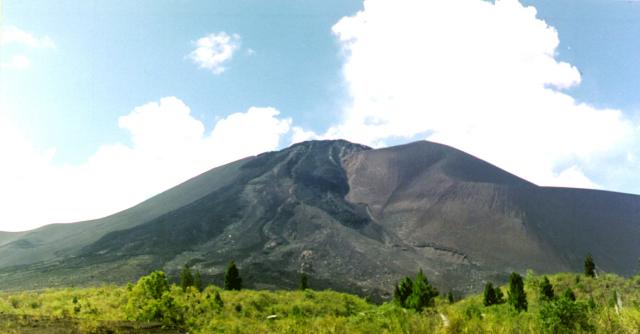 Indonesian stratovolcano Mount Soputan erupted on September 18, 2012 shooting ash and smoke nearly 1500 m (1 mile) into the sky. State volcanology officials said that Mount Soputan on central Indonesia’s Sulawesi island erupted Tuesday afternoon but there is still no plan for an immediate evacuation since the nearest villages are outside the danger area of about 6.5 km (4 miles) from the crater.

Mount Soputan is about 1,350 miles (2,160 kilometers) northeast of Jakarta. It last erupted in July last year, causing no casualties.

On September 16, 2012 two separate explosions occurred at Gamalama volcano on Ternate Island, Indonesia. Eruption followed an increase in seismic activity and triggered PVMBG to raise the alert level to 3 (out of 4) “Siaga”. According to the newspaper Liputan 6 people  saw an ash plume rise but have not heard the explosion. Read our earlier report on latest Gamalama eruption here.

The small Soputan stratovolcano on the southern rim of the Quaternary Tondano caldera on the northern arm of Sulawesi Island is one of Sulawesi’s most active volcanoes. The youthful, largely unvegetated volcano rises to 1784 m and is located SW of Sempu volcano. It was constructed at the southern end of a SSW-NNE trending line of vents. During historical time the locus of eruptions has included both the summit crater and Aeseput, a prominent NE-flank vent that formed in 1906 and was the source of intermittent major lava flows until 1924 (volcano.si.edu).

The archipelago of Indonesia consists of more than 13,000 islands, spread over an area that is similar in size to that of the continental United States. It is the country with the greatest number and density of active volcanoes.

Most volcanoes in Indonesia belong to the Sunda Volcanic Arc, streching over 3,000 kilometers from NW Sumatra to the Banda Sea. This volcanic arc results from the subduction of Indian Ocean crust beneath the Asian Plate and includes 76% of the region’s volcanoes. To the NNW, the basaltic volcanism of the Andaman Islands results from short spreading centers, and to the east the Banda Arc reflects Pacific Ocean crust subducted westward. North of this arc, the tectonic setting is much more complex: several fragments of plates are converging  to form multiple subduction zones, mainly oriented N-S. These produce the Sulawesi-Sangihe volcanoes on the west and Haimahera on the east of the collision zone.

Indonesia leads the world in many volcano statistics. It has the largest number of historically active volcanoes (76), its total of 1,171 dated eruptions is only narrowly exceeded by Japan’s 1,274, although not much is know about the volcanic activity in the time before European colonialists arrived from the 15th century on. Indonesia has suffered the highest numbers of eruptions producing fatalities, damage to arable land, mudflows, tsunamis, domes, and pyroclastic flows. Four-fifths of Indonesian volcanoes with dated eruptions have erupted in this century.

Featured image:  The small Soputan stratovolcano, seen here from the west, was constructed on the southern rim of the Quaternary Tondano caldera in northern Sulawesi Island. Photo by Agus Solihin (Volcanological Survey of Indonesia).