Birds, fish, and sea life across the world have been dying in huge numbers over the last 2 years. Over 100,000 drum fish washed ashore in Arkansas; other sea life also are littering our shores; thousands of birds have fallen from the skies all over the world. Why? Arguably, increased solar activity coupled with a hole in the earth’s magnetosphere could be the cause. Current scientific knowledge informs us that birds and fish use the earth’s magnetic field during migrations.

The magnetosphere is the area around a planet in which that planet’s magnetic force is the dominant pressure. Earth is protected from the majority of solar radiation and storms by its magnetosphere, but not entirely. 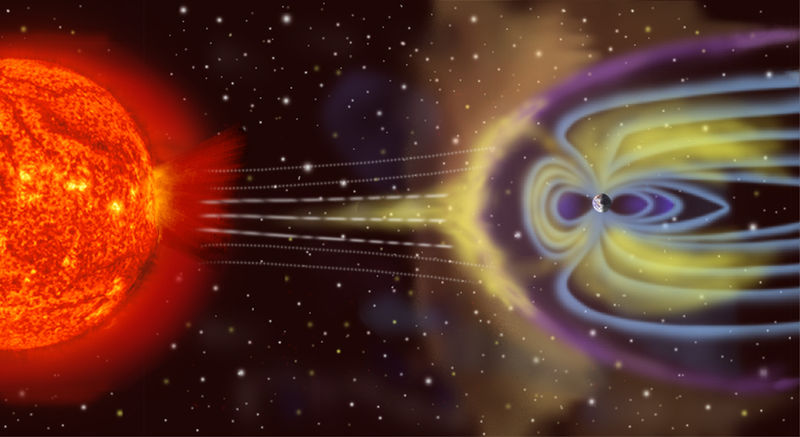 In 2008 NASA detected a massive breach in the magnetosphere, allowing solar winds to penetrate and cause enormous geomagnetic storms. It is known that solar storms bombard our planet with highly charged particles that can affect the pineal gland in humans. The British Medical Journal has published findings that support the proposition that damage to the gland can cause humans to have a diminished sense of direction. Comparing the pineal gland in humans to that of the same gland in birds raised an interesting question. In humans the gland weighs 2.0 grams and equates to less than 1% of the brain’s total weight, whereas the pigeons pineal gland weighed 1.5 grams, 10% of the weight of their brain. While the pineal gland gives us our general sense of direction as iron rich blood flows through and drawn towards the magnetic north, the increased size in the pigeons likely indicate a greater sensitivity to the magnetosphere.

Migratory animals across the planet make use of magnetoaxis -- the ability to detect the magnetosphere. Recently it was discovered that birds can see the magnetic field through photoreceptors in their eyes. This allows them to orient themselves during migratory flights. A massive breach in the magnetosphere detected by NASA in 2008 permitted solar winds to generate enormous geomagnetic storms. Geomagnetic disturbances caused by the sun’s increased activity are likely impacting birds and fish.

Science Daily recently reported that creatures such as crabs, sharks, salmon, starfish and dolphins also possibly use the magnetic field for a second purpose beyond migration -- to detect prey. “Proceedings of the National Academy of Sciences journal found that tiny iron-rich cells called magnetite embedded in the nasal passages of rainbow trout were 100 times more powerful than previously thought, and essentially acted as tiny compass needles inside the animal’s sensory system.”

The recent death of more than 40,000 crabs, starfish, lobsters, and anemones in England highlights the biological effects of a disturbed magnetosphere. The fact that migratory creatures across the world rely on the magnetosphere as a map is indisputable. As we approach maximum solar wind activity, many more opportunities will be presented to study the effects that the changing magnetosphere may be having on our biology as well as that of other creatures on our planet.