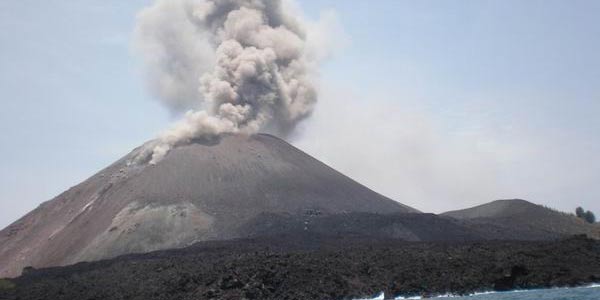 A new phase of activity has started at Krakatau volcano. A large explosion occurred early today September 3, 2012 (01:32 UTC) and produced an ash plume that reached 14,000 ft (4.2 km) according to Darwin VAAC.

Volcanic ash from the increasingly active Anak Krakatau has reached a number of areas in Lampung, prompting officials to issue a warning for local residents and tourists.  According to state news agency Antara, the ash was carried by wind from the southeast to the south, reaching Bandarlampung, about 130 kilometers away from Krakatau.

“It is rather unusual for the dust to be this thick,” said Juniardi, a resident of Bandarlampung who complained that the falling dust was also hampering visibility. (Jakarta Globe)

A report from the volcanology office in Bandung shows that the activities of Anak Krakatau has been on the rise over the past few days, reaching almost 90 eruptions per day.

Nurhuda, head of the observation and information section of the Meteorology, Climatology and Geophysics Agency (BMKG) in Lampung, said the report showed the volcano spewed red hot lava up to 300 meters above its peak. “More than 100 volcanic quakes and tremors have been recorded,” he added.

The renowned volcano Krakatau (frequently misstated as Krakatoa) lies in the Sunda Strait between Java and Sumatra. Collapse of the ancestral Krakatau edifice, perhaps in 416 AD, formed a 7-km-wide caldera. Remnants of this ancestral volcano are preserved in Verlaten and Lang Islands; subsequently Rakata, Danan and Perbuwatan volcanoes were formed, coalescing to create the pre-1883 Krakatau Island.

Caldera collapse during the catastrophic 1883 eruption destroyed Danan and Perbuwatan volcanoes, and left only a remnant of Rakata volcano. This eruption, the 2nd largest in Indonesia during historical time, caused more than 36,000 fatalities, most as a result of devastating tsunamis that swept the adjacent coastlines of Sumatra and Java. Pyroclastic surges traveled 40 km across the Sunda Strait and reached the Sumatra coast. After a quiescence of less than a half century, the post-collapse cone of Anak Krakatau (Child of Krakatau) was constructed within the 1883 caldera at a point between the former cones of Danan and Perbuwatan. Anak Krakatau has been the site of frequent eruptions since 1927. (Volcano.si.edu)