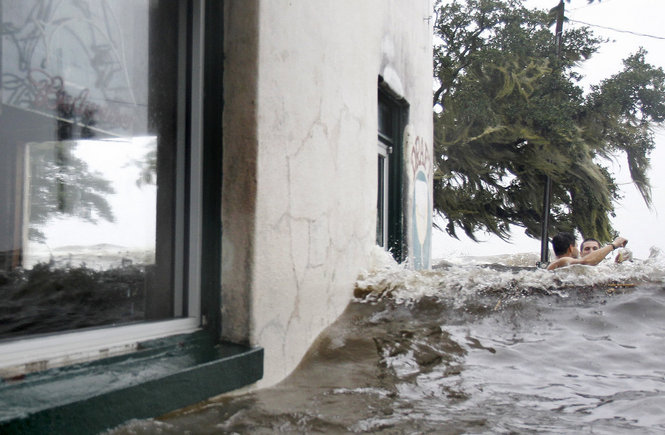 Strong bands of thunderstorms continue to develop over water in the eastern semicircle and also southwest of the center. They have occasionally produced sustained tropical-storm-force winds along with gusts exceeding 60 kt. Those strong rainbands will gradually spread westward tonight across the coastal areas of southeastern Louisiana and southern Mississippi, including the New Orleans metropolitan area.

By Thursday night, Isaac could weaken to a tropical depression and it should become a Post-tropical remnant low pressure system by Friday. There remains no indication in any of the NHC model guidance that Isaac will be able to acquire any baroclinic energy that could cause it to strengthen into a significant extratropical low while it is over the United States.

Since Isaac will continue to move slowly over the next 24-36 hours there will be a prolonged threat of flooding from heavy rains over the northern Gulf Coast area and the south-central United States. 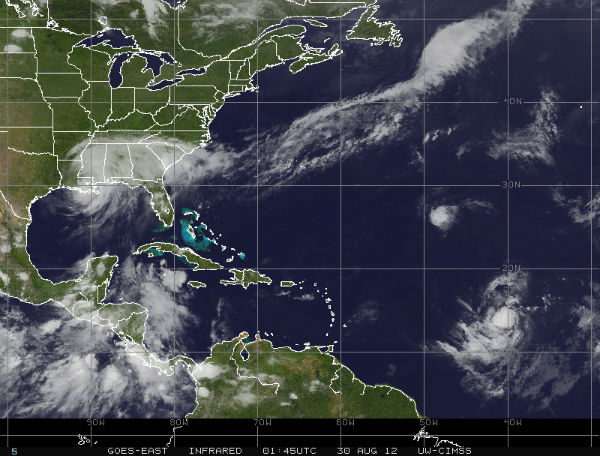 At 00:00 UTC, the center of Tropical Storm Isaac was located by NOAA Doppler weather radar near latitude 30.1 north and longitude 91.1 west. Isaac is moving toward the northwest near 5 mph (7 km/h). This general motion is expected to continue through tonight followed by a turn toward the north-northwest by Thursday night or early Friday.

Isaac should continue to move northwestward and eventually northward through a weakness in the subtropical ridge over the next 36-48 hours. By day 3 when the remnant cyclone is over the upper-Midwest, Isaac should turn east-northeastward when it interacts with weak mid-latitude westerly flow.

The center of Isaac will move farther inland over Louisiana tonight and tomorrow and move over southern Arkansas by early Friday. Tropical-storm-force winds extend outward up to 175 miles (280 km) from the center. The estimated minimum central pressure based on nearby surface observations is 977 mb.

Maximum sustained winds have decreased to near 60 mph (90 km/h) with higher gusts. Belle Chasse Ferry Dock in Plaquemines Parish recorded wind speed of  113 mph (182 km/h).  Steady weakening is expected during the next 48 hours as Isaac continues to move farther inland. Isaac is forecast to become a tropical depression by Thursday night.

Even though Isaac is no longer a hurricane, life-threatening hazards from storm surge and inland flooding are still occurring. The combination of a storm surge and the tide will cause normally dry areas near the coast to be flooded by rising waters. The water could reach the following depths above ground if the peak surge occurs at the time of high tide:

The deepest water will occur along the immediate coast in areas of onshore winds. Surge-related flooding depends on the relative timing of the surge and the tidal cycle and can vary greatly over short distances. Near the coast the surge will be accompanied by large and dangerous waves. Shell Beach, Louisiana recorded storm surge height between 9 and 11 feet. A storm surge of nearly 7 feet is still occurring at Waveland Mississippi.

Isaac is expected to produce total rainfall amounts of 7 to 14 inches with possible isolated maximum amounts of 25 inches over much of Louisiana, southern and central Mississippi, southwest Alabama and southern and central Arkansas through Friday. These rains could result in significant lowland flooding. A levee in Plaquemines Parish will be breached to relieve pressure.

Dangerous surf and rip current conditions will continue to affect the West Coast of Florida and the northern Gulf Coast for the next day or so.

Examiner reports Isaac slowly lashes toward Assumption Parish, only 53 miles southeast of Houma, Louisiana, less than 100 miles south of Bayou Corne’s sinkhole where a hurricane warning is in effect Wednesday. Officials report trees falling, power outages and floodings. All advisories released by the Assumption Parish Office of Homeland Security & Emergency Service remain. Isaac’s eye wall is expected to pass right over sinkhole area. The winds will become much stronger as the day progresses. Assumption Parish officials ordered a mandatory evacuation. Monday morning, officials there ask that people who remained in the area to “please abide by the curfew and remain sheltered in place.”

Featured image: (TED JACKSON / THE TIMES-PICAYUNE) Against the advice of authorities, men risk their lives for a few minutes in the high surf against the backdrop of the flooded out Don’z On the Lake bar on the Mandeville lakefront as Hurricane Isaac batters Mandeville with high winds and high tides, Wednesday August 29, 2012.