Leslie strengthens into the sixth hurricane of the Atlantic season and it’s aiming Bermuda as it moves northward. Leslie is a large tropical cyclone that is forecast to grow in size over the next several days. The wind field of the cyclone, combined with its expected slow motion will help to generate large long-period swells that will propagate away from the tropical cyclone toward Bermuda and much of the U.S. East Coast for the remainder of this week.

Leslie is growing more organized and has just become a hurricane. NHC wind probability forecast calls for a 48% chance that Leslie will be a Category 2 or stronger hurricane Sunday morning. Leslie is now located about 748 km (465 miles) south-southeast of Bermuda. Leslie is projected to strike Bermuda as a hurricane of Category 1 or 2 strength later Saturday night into Sunday. 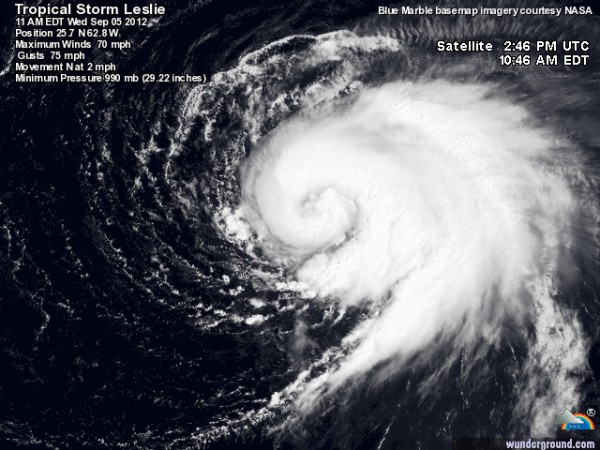 Leslie is moving northward near 2 mph (4 km/h). Maximum sustained winds are now 75 mph ( 120 km/h) with higher gusts. A slow northward to north-northwestward motion, which may be erratic at times, is expected over the next couple of days.

The system is forecasted to move quickly into Atlantic Canada waters after crossing Bermuda. New Brunswick and Nova Scotia to Prince Edward Island, the Gulf of St. Lawrence and Newfoundland should be prepared for tropical storm or hurricane conditions early next week. Forecasters are confident Leslie will pick up forward speed moving between 20 and 30 mph at the latitude of Nova Scotia and Newfoundland. Conditions could rapidly deteriorate Monday. 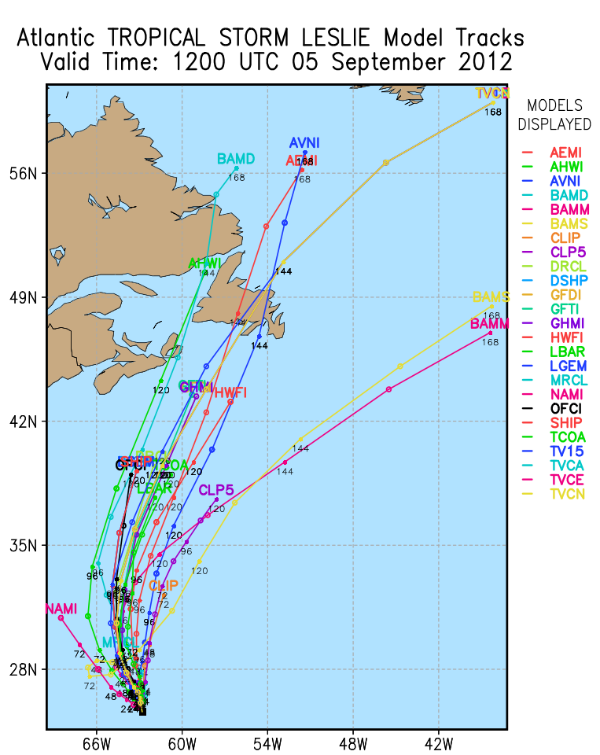 Leslie will generate rough surf and increase the number and strength of rip currents along much of the eastern coast of the United States through the weekend. Swells generated by Leslie will continue to affect Bermuda, the U.S. East Coast from central Florida northward, the northern Leeward Islands, Puerto Rico and the Virgin Islands for the next several days. These swells could cause life-threatening surf and rip current conditions. NOAA buoy 41049, located about 140 miles north-northwest of the center of Leslie has been reporting sustained tropical-storm-force winds for the past 3 hours. The estimated minimum central pressure is 990 mb.

The majority of tropical cyclones are swept to the northeast after passing Bermuda’s latitude. In 2003, Juan rolled in from the south across Nova Scotia and caused significant damage. The combination of waters that are warmer than usual  south of Atlantic Canada and quickening steering winds may result in slower weakening of a hurricane either moving by at sea or plowing toward the coast.