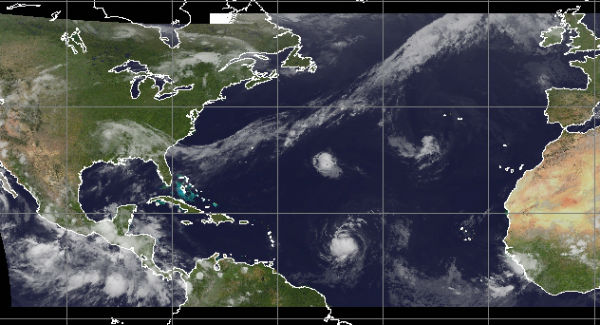 Four storms in the tropical Atlantic and Pacific are in various stages of development. Tropical Storm Isaac is slowly weakening over central Louisiana, but is still producing heavy rain, severe weather and high water levels along the northern Gulf coast. Hurricane Ileana is in the eastern Pacific and growing a little stronger, but is headed for cooler waters. Hurricane Kirk has become the fifth hurricane of the 2012 Atlantic Hurricane Season and is expected to stay well offshore. Tropical Depression 12 has formed far east of the Lesser Antilles and become Tropical Storm Leslie. Leslie is forecast to reach hurricane strength in a couple of days. It is still too soon to know what impacts Leslie might have on land. 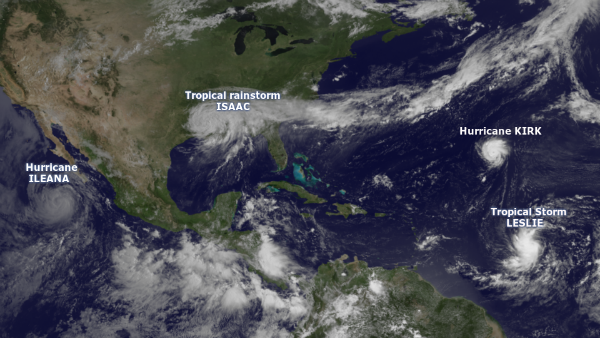 Maximum sustained winds have increased to near 100 mph (160 km/h) with higher gusts. Kirk is a Category 2 hurricane on the Saffir-Simpson hurricane wind scale. Some additional strengthening is forecast on Friday. Weakening is forecast to begin by late Saturday.

Although the earlier rapid intensification phase seems to have leveled off, the eye has warmed further and become better defined in the last few hours. Kirk has another day or so traversing warm waters in a relatively low shear environment. The cyclone also has a well-established outflow sink to the east and is forecast to approach a jet to the northwest which could serve as an additional outflow channel. A sharp increase in shear and a track over rapidly decreasing sea surface temperatures beyond 48 hours should result in steady or even rapid weakening. 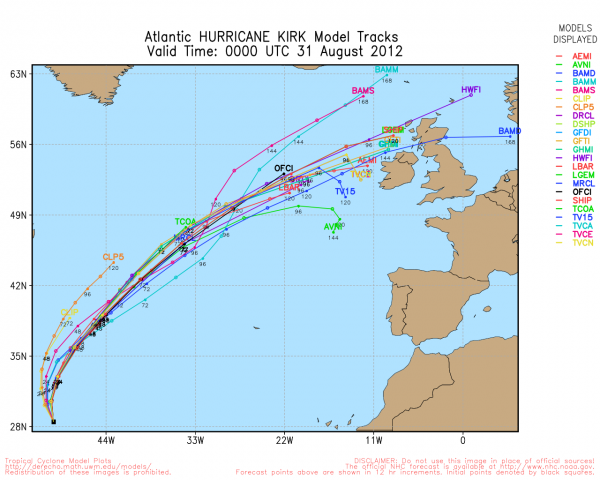 Kirk became organized enough to be named a tropical storm in the central Atlantic on Tuesday, Aug. 28, 2012, at 11 p.m. EDT. Favorable conditions for further strengthening into a hurricane have persisted with warm water, little wind shear and limited dry air. Kirk should stay  away from any land over the next several days and is expected to curve more to the northeast before reaching Bermuda.

The system has become organized rather quickly with favorable conditions in place. Steering flow to the west-northwest could bring this next system north of the northern Leeward Islands and Puerto Rico by Labor Day weekend.

At 03:00 UTC  the center of Tropical Storm Leslie was located near latitude 14.7 north and longitude 46.8 west. Leslie is moving toward the west near 18 mph. A motion toward the west- northwest with some decrease in forward speed is expected during the next couple of days. Leslie is expected to move toward the northeast of the Lesser Antilles. Maximum sustained winds have increased to near 50 mph (85 km/h) with higher gusts. Additional strengthening is forecast during the next 48 hours and Leslie could become a hurricane by Friday night. Tropical-storm-force winds extend outward up to 45 miles (75 km) from the center. The estimated minimum central pressure is 1002 mb. NOAA buoy 41041 recently reported a pressure of 1004.1 as the center passed to the north.

Leslie is currently on the south side of the subtropical ridge which should steer the system generally west-northwestward for the next 48 hr or so. This low is forecast to break the subtropical ridge at the mid-/upper-levels and extend far enough vertically downward to weaken the ridge at 700-850 mb. This evolution should cause Leslie to gradually turn northward on the eastern side of the cut-off low after the 48 hr point. 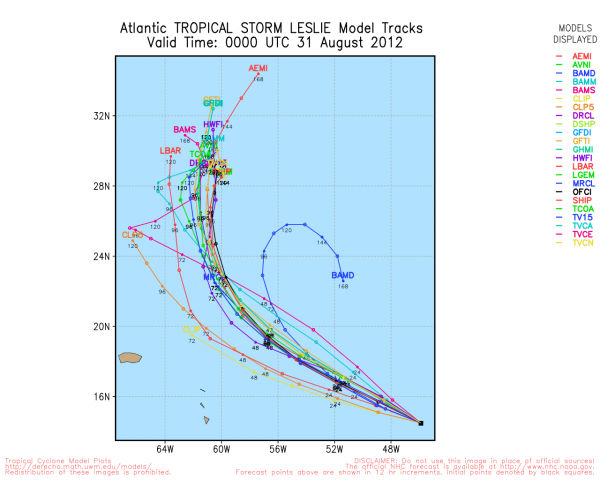 The global models suggest that Leslie should remain in an environment of light/moderate easterly shear for the next 36-48 hr which should allow for gradual development. After that time the cyclone is forecast to encounter significant southwesterly upper-level winds associated with the cut-off low which is expected to cause enough shear to slow or halt intensification.

The global models show this system becoming very large which is reflected in the current wind field forecast. An additional increase in size appears likely after 72 hr. Bermuda and interests along the East Coast of the U.S. should monitor Leslie closely.

At 03:00 UTC the center of Hurricane Ileana was located near latitude 21.2 north and longitude 114.2 west. Ileana is moving toward the north-northwest near 6 mph (9 km/h) and the cyclone is expected to turn toward the west-northwest at about the same forward speed in the next two days. 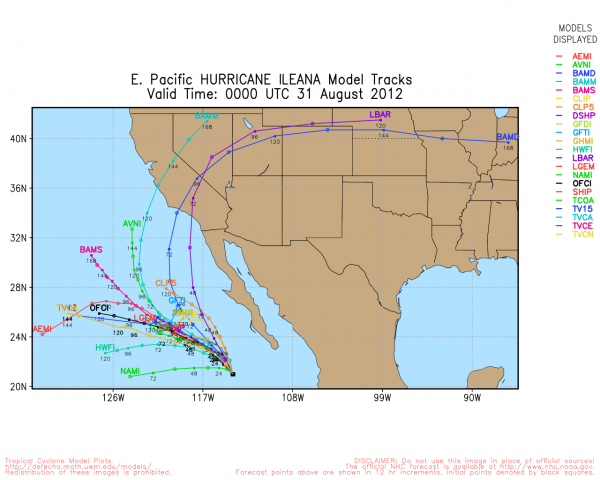 Ileana has sporadically displayed a ragged eye this evening. A prominent shortwave trough west of California would act to recurve the hurricane toward Mexico or the United States if the cyclone retained a deep structure over the next few days. However, Ileana should weaken and gradually turn toward the west as it is steered along in the low-level tradewind flow. It is likely that Ileana has peaked in intensity as rather hostile thermodynamics are soon to be experienced. So while the vertical shear remains low over the next few days, the water temperature cools below 26 Celsius and the moisture drops considerably in about a day.

A large area of disorganized showers and thunderstorms extends several hundred miles south of the coast  of southern Mexico. Upper-level winds are expected to be marginally conducive for development. This system has a medium 30% chance of becoming a tropical cyclone during the next 48 hours as it moves west-northwestward at 10 to 15 mph (16 to 24 km/h). 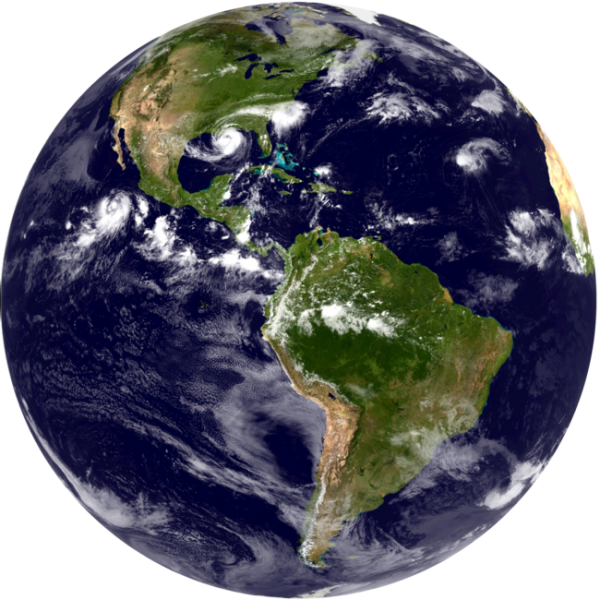