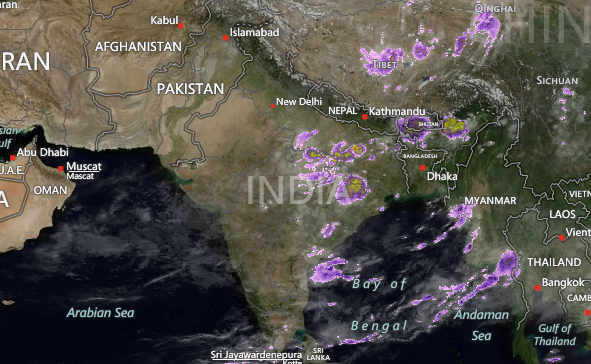 Ten people were killed and 38 others went missing as incessant rains battered Uttarakhand on Saturday, August 4, 2012 triggering landslides, cloud bursts and flash floods which flattened homes and stranded hundreds of pilgrims with the Chardham Yatra coming to a grinding halt.

The Garhwal region bore the brunt of the natural calamity. The state government has sounded a high alert after the MET department’s warned of very heavy rains and sought the help of the army to mitigate the sufferings of the people. Nineteen labourers of the state-run UJVN Ltd’s Assi Ganga hydel project went missing following a cloud burst in the upper hills of Uttarkashi district. Similarly, 19 other people also went missing from Gangori, Dunda, Uttarkashi town and Barkot areas in the district.

“We have launched a manhunt to trace the missing people,” said R Rajesh Kumar District Magistrate Uttarkashi. Elsewhere in the state, 10 people were killed in different incidents following heavy rains during the past 24 hours, said sources in the Disaster Management and Mitigation Centre (DMMC).

In the disaster-prone Uttarkashi district, flash floods hit several low-lying areas creating havoc. At least three jawans of the fire brigade department and two others were killed at Gangori area even as Chardham yatra to Gangotri and Yamunotri remained suspended for the second day today. In Gangori area of Uttarkashi, Bhagirathi is flowing above the danger level with people being evacuated to safer areas.

Nearly 30 homes were washed away in the floods with the Gangori bridge also collapsing. “We have now reports that three jawans of the fire brigade and two others were killed in Gangori,” said state disaster management minister Yashpal Arya. Two more people were killed in Dunda area of Uttarkashi district. While two children were killed in a house collapse at Kararnprayag area of Chamoli district early today, another child was washed away in flash floods at Pokhri area of the district where landslides continue to hit blocking highways leading to Badrinath.
Hundreds of Badrinath pilgrims were stranded at various places at Patalganga, Lambagar and Birahi due to fresh landslips. The yatra for Kedarnath shrine was also suspended, the sources said. The government has launched relief and rescue operations but heavy rains were hampering them, top officials said. Food packets are being sent to the affected people. Nearly 250 families have already been taken to safer areas in different areas of Uttarkashi and Chamoli districts.

Chief Minister Vijay Bahuguna was monitoring the situation and has asked the concerned authorities to launch rescue and relief operation in the disaster-hit areas. He also asked concerned officers to reopen roads leading to pilgrim shrines so that the stranded pilgrims can go home. Bahuguna also asked the special Chardham cell set up at the secretariat to send him a daily report regarding the situation in the Garhwal region. The CM said his government would provide food and other essential items to the stranded pilgrims. Landslides are common in fragile hills of Garhwal region.

As many as 22 people were trapped on Friday, August 3, 2012 in flash floods in Jammu region, prompting the authorities to sound an alert in the region. “A flash flood alert has been sounded in Jammu. Due to heavy overnight rains, various rivers in Jammu region are flooded. 22 people and large number of cattle are trapped in the flash floods in Ujh and Tawi rivers,” an official said. Of the 22 people, 15 are trapped in Ujh river at Khadwal area in Kathua district and two each in Mayachak, Nagri, Sujanal (Satwari) and Muthi areas, he said. A rescue operation has been launched for those trapped in the flash floods, triggered by intermittent overnight rains in Jammu, Kathua and Udhampur districts, the official said. The water level in Chenab, Tawi, Ujh and Basantar rivers are nearing the danger mark, officials said, adding that people living in low-lying areas have been alerted and warned of flash floods. They have also been asked to keep away from banks of the flooded rivers.

Hundreds of people residing near Beas river have been evacuated to safe places after flash flood caused by torrential rain over Dhundi peaks at south portal of Rohtang tunnel flooded the Seri rivulet, a tributary to Beas river, on Friday at 8pm. People living close to river between Palchan and Kullu are being evacuated and traffic on national highway has been stopped. Till last report received from Palchan (near Dhundi) at 10.30pm, level of the river was rising continuously and police were evacuating the people from Bahang village, 6km from Manali. According to police, there is no report of any casualty.

Sandeep Kumar, a resident of Bahang village, said people are trying to save the household accessories amid chaotic atmosphere and conditions have become even worse after power failure. “Everything was normal till late evening but the situation changed suddenly after 8pm when river water, mixed with sludge, started engulfing its banks. People are risking their lives to remove the household stuffs,” he said.

An engineer working with a hydel project near Palchan said over phone that roaring sound of river is shaking the foundation of the houses. “Nobody is going to sleep tonight. Villagers have gathered at many places and are guarding the river banks with floodlights,” he said. According to villagers it is a cloudburst which might have caused devastation at its source on mountains. Kullu deputy commissioner Amitabh Awasthi said , police are patrolling the river banks and have directed people to move to safe places. “We have closed the traffic on national highway. We shall keep an eye on the situation throughout the night,” he said.