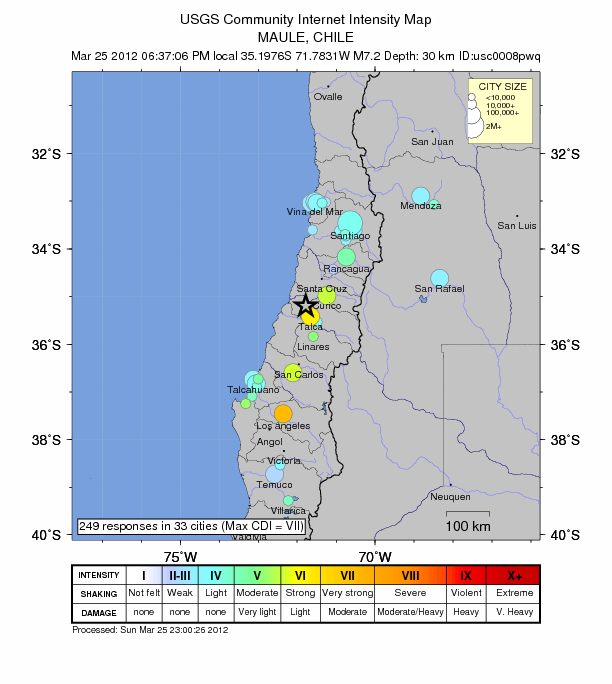 No tsunami warning was issued in first reports after the earthquake.

ONEMI Chile (National Emergency Office of Ministry of the Interior and Public Security) is reporting MMI values up to VIII (severe shaking).

Big parts of the struck area are now without electricity.

Most agencies have now magnitude values ranging from 5.9 to 7.2. Chile is a very well earthquake prepared country and chilean Vice President Hinzpeter has called for calm.

Mobile communications are very difficult in Santiago but after long trying some work.

Problems are reported along the “Talcahuano-Concepcion” road, some reports mention collapse of the road near Rancagu.

Onemi reports 2 people with light injuries in Maipu and 1 earthquake related car accident with 1 injured person in the BioBio region. This brings the total injured to 6.

A reader from Chile sent us this update: “the sensation was stronger than 27/2/2010, mob phone are down not electricity.” — On February 27th, 2010 Chile had 8.8 magnitude earthquake offshore Bio-Bio.

People are saying that the ocean has retreated up to 40 meters. (Expl: Water first pulls back, then returns with force. An excessive or unusual retreat of water in the ocean is the biggest indication of a tsunami).

In a news item made ​​from the offices of ONEMI, Minister Secretary General of Government, Andrew Chadwick, said that the regional ONEMI – The Maule, determined to make a precautionary evacuation in the coastal region due to the observation of recollection sea ​​in the area. The authority stressed that it is a preventive measure to safeguard the security of the population.