extreme weather  Powerful derecho wreaks havoc across the Midwest - one of the worst weather events of 2020 in the U.S.

Old sunspot AR1429 is still very active as it transits the far side of the sun. During the early hours of March 18th it produced a spectacular solar flare, blasted away from northwestern limb. Earth will not be affected by the CME cloud.

Joint USAF/NOAA Report of Solar and Geophysical Activity (18 Mar 2012)
Solar activity was low. Region 1434 (S20W40) produced a single C1/Sn flare at 17/0237Z and ended the period as a Dso type group with beta magnetic characteristics. Region 1435 (S25W50) grew larger and more magnetically complex, ending as a Dao type group with beta-gamma magnetic characteristics. A non-Earth-directed CME was observed in SOHO/LASCO C2 imagery at 18/0024Z and believed to originate from old Region 1429 (N19, L=295). Solar activity is expected to be low with a slight chance for an M-class flare from Regions 1434 or 1435.

The geomagnetic field ranged from quiet to active levels. The coronal hole high speed stream abated over the course of the day. Solar wind speed at the ACE spacecraft began declining from 650 km/s at 17/2300Z to end the period near 500 km/s. Bt decreased and Bz was neutral to slightly negative. With the departure of the high speed stream, the geomagnetic field activity decreased from active to quiet levels. The greater than 2 MeV electron flux at geosynchronous orbit reached high levels during the period.

The geomagnetic field is expected to range from quiet to active levels as a CME from 15 March arrives early in the period on Day 1 (19 March). There is a slight chance for minor storm levels. Activity levels are expected to decline to unsettled on Day 2 (20 March) and quiet by Day 3 (21 March) as the effects from the CME subside. 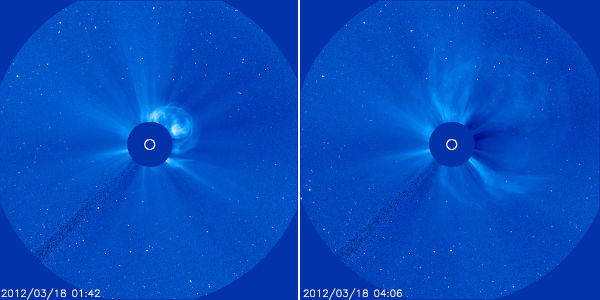 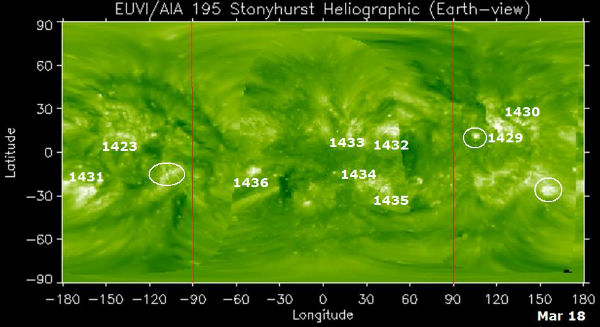