An equinox occurs twice a year, when the tilt of the Earth’s axis is inclined neither away from nor towards the Sun, the center of the Sun being in the same plane as the Earth’s equator. The term equinox can also be used in a broader sense, meaning the date when such a passage happens. Around the equinox, the night and day have approximately equal length. At an equinox, the Sun is at one of two opposite points on the celestial sphere where the celestial equator and ecliptic intersect. These points of intersection are called equinoctial points: the vernal point and the autumnal point. By extension, the term equinox may denote an equinoctial point. 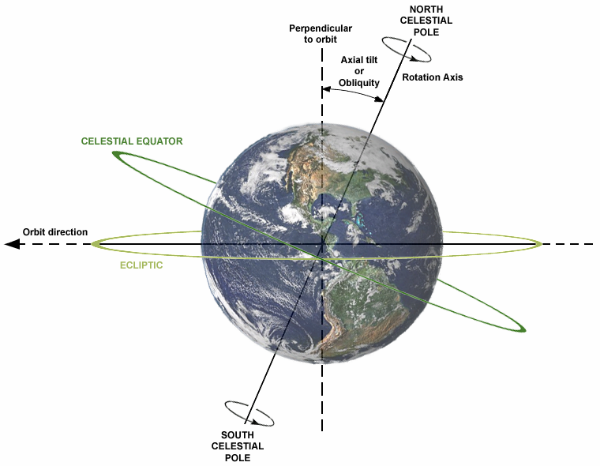 An equinox happens each year at two specific moments in time, when there is a location (the subsolar point) on the Earth’s equator, where the center of the Sun can be observed to be vertically overhead, occurring around March 20 and September 22 each year. Although the word equinox is often understood to mean “equal

A solstice is an astronomical event that happens twice each year when the Sun reaches its highest position in the sky as seen from the North or South Pole. At the solstices, the Sun stands still in declination. That means the seasonal movement of the Sun’s path (as seen from Earth) comes to a stop before reversing direction. The solstices, together with the equinoxes, are connected with the seasons. In many cultures the solstices mark either the beginning or the midpoint of winter and summer.

The term solstice can also be used in a broader sense, as the date (day) when this occurs. The day of the solstice is either the “longest day of the year” or the “shortest day of the year” for any place on Earth, because the length of time between sunrise and sunset on that day is the yearly maximum or minimum for that place. (Wikipedia)