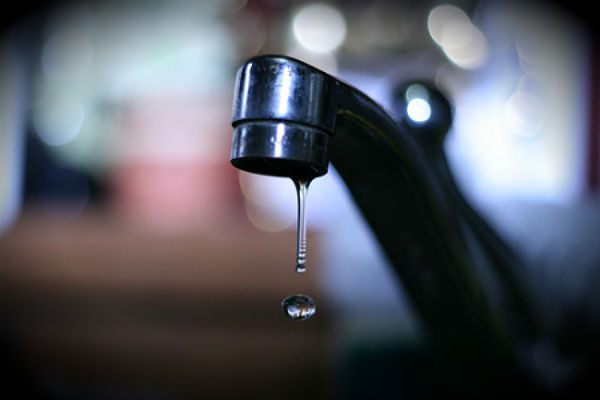 According to a report released by the University of California and comissioned by the California State Water Resources Control Board, one in 10 people living in California’s most productive agricultural areas is at risk for harmful levels of nitrate contamination in their drinking water.

The report, “Addressing Nitrate in California’s Drinking Water“, is the first comprehensive scientific investigation of nitrate contamination in the Tulare Lake Basin, which includes Fresno and Bakersfield, and the Salinas Valley, which includes Salinas and areas near Monterey. It defines the extent of the problem, suggests promising solutions and outlines possible funding mechanisms. The report should help inform discussions among people involved with drinking water, waste discharge, and agricultural issues, including various local and state government agencies.

Drinking water high in nitrate is potentially harmful to human and animal health. Nitrate (NO3) is a naturally occurring form of nitrogen (N) which is very mobile in water. It is essential for plant growth and is often added to soil to improve productivity. Water moving down through soil after rainfall or irrigation carries dissolved nitrate with it to ground water. In this way, nitrate enters the water supplies of many homeowners who use wells or springs. 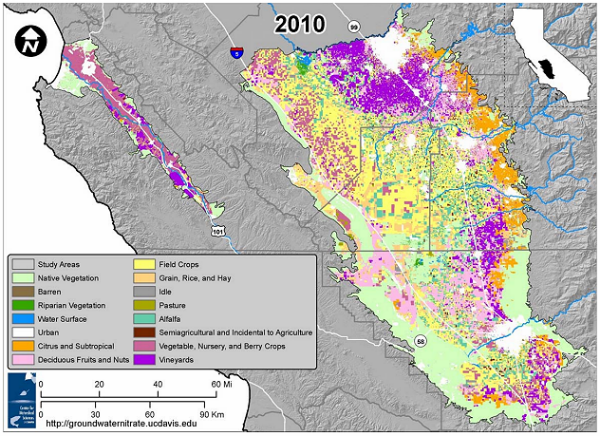 Nitrogen in organic and synthetic fertilizers has dramatically increased crop production in California in recent decades. However, excess nitrate in groundwater from surface nitrogen use has been linked to thyroid illnesses, some cancers and reproductive problems. Since the 1940s, synthetic fertilizer use, increased manure applications to cropland, and a shift from pasture-raised dairy cattle to confined animal facilities have resulted in the accumulation of excess nitrate in groundwater. Much of that excess is only now beginning to affect water quality in the Tulare Lake Basin and Monterey County portion of the Salinas Valley. Today’s discharges will continue to contaminate drinking water decades from now, according to the report.

Jay Lund, director of the UC Davis Center for Watershed Sciences and a report co-author points that cleaning up nitrate in groundwater is a complex problem with no single solution.

“California groundwater quality is a significant concern to the water boards, and this comprehensive report presents current science and potential solutions on how to deal with this chronic and long-standing issue!” Thomas Howard, executive director of the State Water Board. 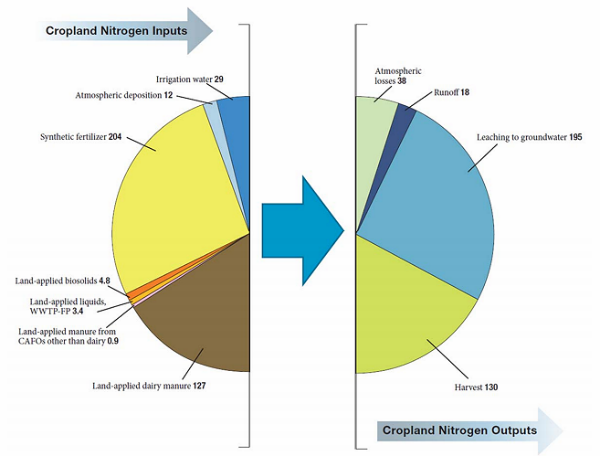 In their new report, UC Davis scientists examine data from wastewater treatment plants, septic systems, parks, lawns, golf courses and farms. The report concludes that more than 90 percent of human-generated nitrate contamination of groundwater in these basins is from agricultural activity. The nitrate study area includes four of the nation’s five counties with the largest agricultural production, representing 40 percent of California’s irrigated cropland and more than half of the state’s confined animal farming industry. As nitrates continue to spread, drinking water system costs could increase for Tulare Lake Basin and Salinas Valley communities

The report found that 10 percent of the 2.6 million people in the Tulare Lake Basin and Salinas Valley rely on groundwater that may exceed the nitrate standard of 45 milligrams per liter set by the California Department of Public Health for public water systems. The problem is likely to worsen for decades, as nitrate applied to today’s crops slowly makes its way into groundwater.

Communities often respond to initial contamination by drilling a new well or shifting to cleaner water sources. But as high nitrate concentrations continue to persist, communities are faced with using expensive treatment and alternatives. In addition to the public health risk, nitrate groundwater contamination imposes major abatement costs on small rural communities, which often have little financial means or technical capacity to maintain safe drinking water. More than 17 percent of the residents in the Tulare Lake Basin and 10 percent of residents in the Monterey County portion of the Salinas Valley live below the poverty line. 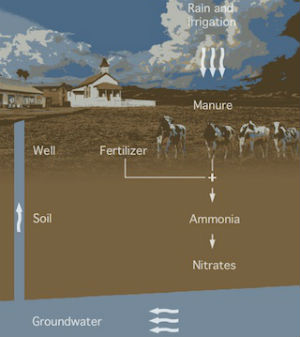 The report also calls for a statewide effort to integrate water-related data collection by various state and local agencies.

+ Drinking water supply actions, such as treatment and finding alternative water supplies, are most cost-effective. However, well supplies will become less available as nitrate pollution continues to spread.

+ While many options exist to provide safe drinking water, there is no single or ideal solution for every community affected.

+ Agricultural fertilizers and animal manure applied to cropland are the two largest regional sources of nitrate leached to groundwater-representing more than 90 percent of the total.

+ Reducing nitrate in the groundwater is possible, with methods such as improved fertilizer management and water treatment. Costs range from modest to quite expensive.

Part of the natural global nitrogen cycle, nitrogen is a key element that plants require for growth. Yet, in addition to contaminating groundwater, the surge in human-related nitrate over the past century has also created marine “dead zones,” nitrogen oxide emissions that contribute to climate change, and a host of other environmental problems. (TerraDaily)

The UC Davis Report on Addressing Nitrate in California’s Drinking Water is available at: http://groundwaternitrate.ucdavis.edu/.

Nitrate contamination in soil and groundwater has been a concern of the Regional Water Boards for some time. These two fact sheets outline how the Central Valley and Central Coast Regional Water Quality Control Boards are currently addressing nitrate. 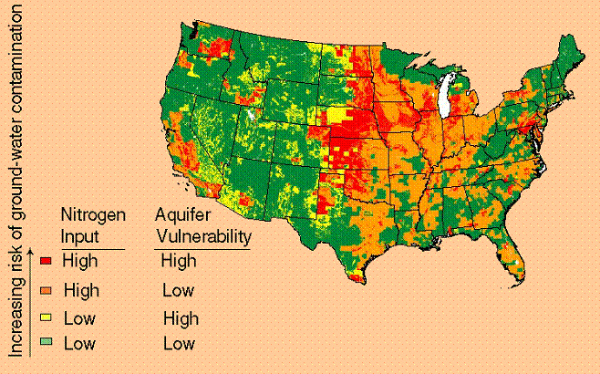 Infants under six months of age are susceptible to nitrate poisoning. Bacteria that live in the digestive tracts of newborn babies convert nitrate to nitrite (NO2). Nitrite then reacts with hemoglobin, which carries oxygen in blood, to form methemoglobin. Methemoglobin cannot carry oxygen, thus the affected baby suffers oxygen deficiency. The resulting condition is referred to as methemoglobinemia, commonly called“blue baby syndrome.”

The most noticeable symptom of nitrate poisoning is a bluish skin coloring, called cyanosis, particularly around the eyes and mouth. A baby with bluish skin should be taken to a medical facility immediately and tested for nitrate poisoning. The blood sample of an affected baby is chocolate brown instead of the normal bright red due to lack of hemoglobin. Methemoglobinemia is relatively simple to treat, and in most reported cases, the affected baby makes a full recovery.

Within several months after birth, the increasing level of hydrochloric acid in a baby’s stomach kills most of the bacteria which convert nitrate to nitrite. By the age of six months, the digestive system is fully developed, and the risk of nitrate-induced methemoglobinemia is greatly reduced.

Water quality standards for human consumption have been set at ten milligrams of nitrate-nitrogen per liter of water (10 mg/L NO3-N). This level of nitrate-nitrogen is equivalent to 45 mg/L of nitrate (NO3). When reading laboratory reports of water quality, be sure to note whether reported values are for nitrate-nitrogen or nitrate. Note that one mg/L equals one ppm (part per million). Most reported cases of blue baby syndrome due to contaminated water have occurred when infant formula was prepared using water with greater than 40 mg/L NO3-N.

Consumption of high-nitrate water by pregnant women and nursing mothers is not as likely to be harmful to babies as direct consumption. The health effects in these cases are not completely understood, so it is recommended that pregnant women and nursing mothers limit nitrate consumption. Possible connections between nitrate and other health problems such as nervous system disorders, cancer, and heart damage are not well documented and are currently being researched.

Ruminant animals (cattle and sheep) and infant monogastrics (baby pigs and baby chickens) are also susceptible to nitrate poisoning because of bacteria living in their digestive tracts. Horses, even though they are monogastric, are susceptible to nitrate poisoning throughout their lives. Livestock may be exposed to large quantities of nitrate in their feed as well as in contaminated water. Animals which are treated in time can recover fully from nitrate poisoning. Scientific studies indicate that water with greater than 25 mg/L NO3-N can be harmful to animals. (NCCES)