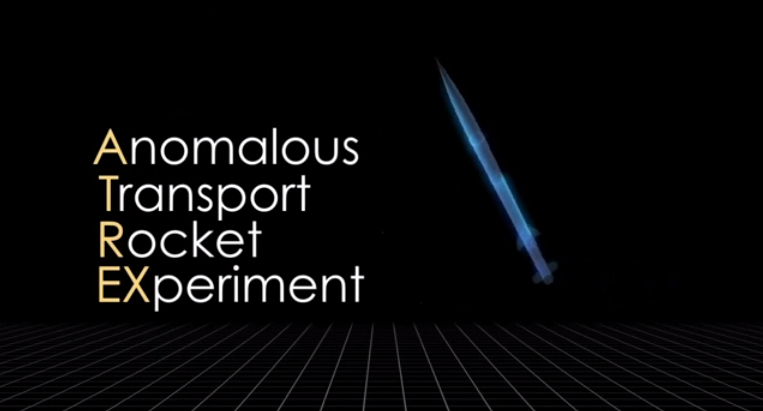 Since the high probability of unacceptable weather is preventing a launch attempt on March 19 again, NASA has rescheduled the launch of its five suborbital sounding rockets from the Wallops Facility in Virginia as part of a study of the upper level jet stream to no earlier than Tuesday night, March 20.

The Anomalous Transport Rocket Experiment (ATREX) will gather information needed to better understand the process responsible for the high-altitude jet stream located 60 to 65 miles (96 – 104 km / official boundary of space) above the surface of the Earth.

As part the mission, the five rockets will release a pyrophoric chemical tracer – trimethyl aluminum (TMA) – that will form milky, white clouds that allow scientists and the public to “see” the winds in space. These clouds may be visible for up to 20 minutes by residents from South Carolina to southern New Hampshire and Vermont.

The Anomalous Transport Rocket Experiment (ATREX) is a Heliophysics sounding rocket mission that will gather information needed to better understand the process responsible for the high-altitude jet stream located 60 to 65 miles above the surface of the Earth.

At those altitudes winds rush through a little understood region of Earth’s atmosphere at speeds of 200 to 300 miles per hour (321 to 482 kilometres per hour). Lower than a typical satellite’s orbit, higher than where most planes fly, this upper atmosphere jet stream makes a perfect target for a particular kind of scientific experiment: the sounding rocket. Some 35 to 40 feet long (~12 m), sounding rockets shoot up into the sky for short journeys of eight to ten minutes, allowing scientists to probe difficult-to-reach layers of the atmosphere.

NASA will launch five such rockets in approximately five minutes to study these high-altitude winds and their intimate connection to the complicated electrical current patterns that surround Earth. First noticed in the 1960s, the winds in this jet stream shouldn’t be confused with the lower jet stream located around 30,000 feet (9 km), through which passenger jets fly and which is reported in weather forecasts.

This rocket experiment is designed to gain a better understanding of the high-altitude winds and help scientists better model the electromagnetic regions of space that can damage man-made satellites and disrupt communications systems. The experiment will also help explain how the effects of atmospheric disturbances in one part of the globe can be transported to other parts of the globe in a mere day or two.

“This area shows winds much larger than expected,” says Miguel Larsen, a space scientist at Clemson University who is the principal investigator for these five rockets

“We don’t yet know what we’re going to see, but there is definitely something unusual going on. ATREX will help us understand the big question about what is driving these fast winds.”

Determining what drives these winds requires precise understanding of the way the winds move and what kind of turbulence they show. To get an idea of the task at hand, imagine mapping not just the ups and downs of ocean waves but the attendant surf, undertow, and tides, all from 60 miles away and in only 20 minutes.

To accomplish this, the five sounding rockets will launch from NASA’s Wallops Flight Facility in Virginia releasing a chemical tracer into the air. The chemical – a substance called trimethyl aluminum (TMA) — forms milky, white clouds that allow those on the ground to “see” the winds in space and track them with cameras. In addition, two of the rockets will have instrumented payloads to measure pressure and temperature in the atmosphere. 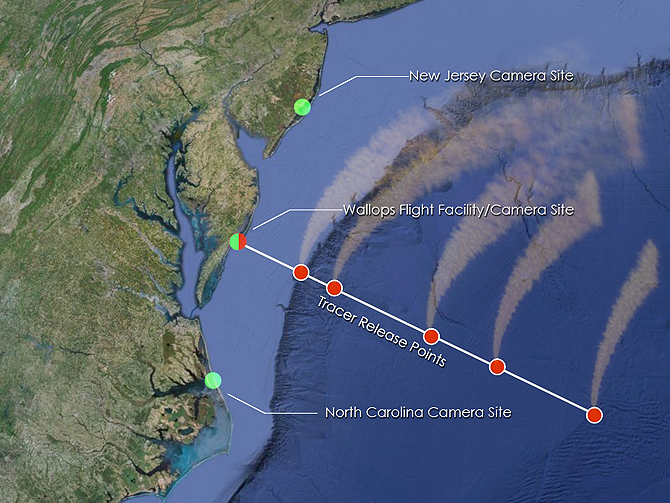 The rockets will be launched on a clear night within a period of minutes, so the trails can all be seen at the same time. The trimethyl aluminum will then be released in space out over the Atlantic Ocean at altitudes from 50 to 90 miles (80 – 144 km). The cloud tracers will last for up to 20 minutes and will be visible in the mid-Atlantic region, and along the east coast of the United States from parts of South Carolina to New Jersey. (NASA ATREX Mission)

Sounding rockets are usually launched one or two at a time, so launching five at once will call for specific timing and direction to gather the required data. The rockets must be launched on a clear night between March 14 and April 3. Scientists will then use special camera equipment to track the five clouds and measure how quickly they move away from each other. They can then plug this information into equations that will describe what kind of turbulence exists in the winds.

How to watch mission lauch online:

Trimethyl aluminium is the chemical compound with the formula Al2(CH3)6, abbreviated as Al2Me6, (AlMe3)2 or the abbreviation TMA. This pyrophoric, colorless liquid is an industrially importantorganoaluminium compound. It evolves white smoke (aluminium oxides) when the vapor is released into the air.

A pyrophoric substance (from Greek πυροφορος, purophoros, “fire-bearing”) is a substance that will ignite spontaneously in air. Examples are iron sulfide and many reactive metals includinguranium, when powdered or sliced thin. Pyrophoric materials are often water-reactive as well and will ignite when they contact water or humid air. They can be handled safely in atmospheres of argon or (with a few exceptions) nitrogen.

NASA has used TMA for decades as part of rocket studies from sites worldwide to study the near-space environment. TMA burns slowly and produces visible light that can be tracked visually and with special camera equipment.

The products of the reaction when TMA is exposed to air or water are aluminum oxide, carbon dioxide and water vapor. Aluminum oxides are used to combat heartburn and to purify drinking water. Also, all three products occur naturally in the atmosphere. The TMA poses no threat to the public during preparation on the ground or during the release in space.