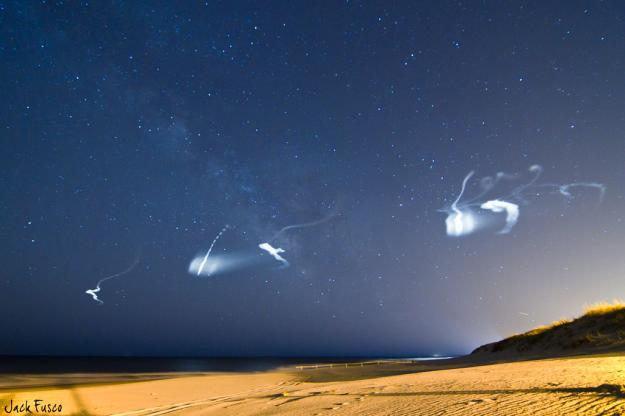 NASA successfully launched five suborbital sounding rockets on March 27th from its Wallops Flight Facility in Virginia as part of a study of the upper level jet stream.

Each of the rockets released a chemical tracer that created milky, white clouds at the edge of space. The launches and clouds were reported to be seen from as far south as Wilmington, N.C.; west to Charlestown, W. Va.; and north to Buffalo, N.Y.

The Anomalous Transport Rocket Experiment (ATREX) mission will gather information needed to better understand the process responsible for the high-altitude jet stream located 60 to 65 miles (96 – 104 km / official boundary of space) above the surface of the Earth.

At those altitudes (60 to 65 miles (96 – 104 km) winds rush through a little understood region of Earth’s atmosphere at speeds of 200 to 300 miles per hour (321 to 482 kilometres per hour). Lower than a typical satellite’s orbit, higher than where most planes fly, this upper atmosphere jet stream makes a perfect target for a particular kind of scientific experiment: the sounding rocket. Some 35 to 40 feet long (~12 m), sounding rockets shoot up into the sky for short journeys of eight to ten minutes, allowing scientists to probe difficult-to-reach layers of the atmosphere.

Inside the rockets and preparation

Sounding rockets are usually launched one or two at a time, so launching five at once will call for specific timing and direction to gather the required data. The rockets must be launched on a clear night between March 14 and April 3. Scientists will then use special camera equipment to track the five clouds and measure how quickly they move away from each other. They can then plug this information into equations that will describe what kind of turbulence exists in the winds.