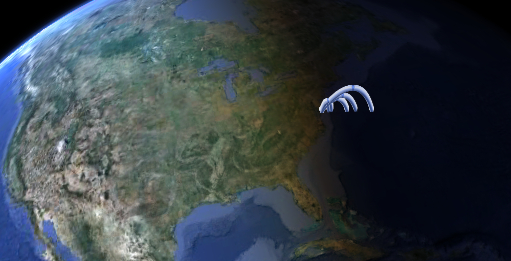 NASA is still not sure whether the rockets will be launched today but have continued rocket preparation of launch attempt in hope weather might be a “go”.

Probability of acceptable weather for launch is less than 10%. Webcast started at 8 p.m. EDT.

Update at 20:17:40 EDT (UTC -4):
Rocket preparation continues as part of tonight’s launch attempt. All five rockets are removed from their shelters. The rockets are boxed in foam to help maintain motor and payload temperature.

The Anomalous Transport Rocket Experiment (ATREX) will gather information needed to better understand the process responsible for the high-altitude jet stream located 60 to 65 miles (96 – 104 km / official boundary of space) above the surface of the Earth.

As part the mission, the five rockets will release a chemical tracer that will form milky, white clouds that allow scientists and the public to “see” the winds in space. These clouds may be visible for up to 20 minutes by residents from South Carolina to southern New Hampshire and Vermont.

Whether we see them launched today or not, here are the links for live video broadcast and updates:

You can also download ATREX KMZ File for Google Earth: See the ATREX rocket trajectories in Google Earth! Keyhole Markup Language (KML) files are zipped into what’s known as a KMZ. When this is put into Google Earth, you can see the path the rockets will take. Download this KMZ (above) of the ATREX trajectories to see them in Google Earth on your computer or mobile device. When open in Google Earth, click the small clock in the upper left of the player “to toggle time slider animation”. This will show a time lapse of each rocket launch. If you don’t have Google Earth, download a copy here: google.com/earth