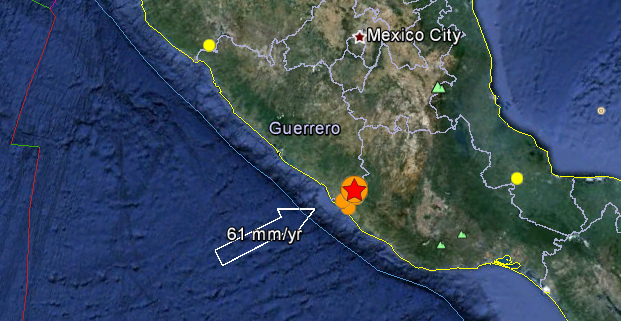 Nearest populated places are: Coyul (16km), Putla de Guerrero (18km), Cuitlapa (15km), Laguna (3km). The closest civilian airport is Pinotepa Nacional (77km). There or no Nuclear Plants in the vicinity of the epicenter

This earthquake is a subduction earthquake, which means that the Oceanic plate is gliding below the North American plate and often hangs for a while. When the accumulated energy is suddenly freed a massive earthquake is generated.

The area has currently a lot of aftershocks as could be expected. These aftershocks will go on for many hours and even days and people in the epicenter area will have to spend the night on the streets out of fear for aftershocks.

NOAA has released the following Tsunami bulletin: A DESTRUCTIVE WIDESPREAD TSUNAMI WAS NOT GENERATED BASED ON EARTHQUAKE AND HISTORICAL TSUNAMI DATA. HOWEVER, THERE IS THE  POSSIBILITY OF SOME LOCAL TSUNAMI EFFECTS.  THIS EARTHQUAKE IS LOCATED INLAND FROM THE COAST.

GDACS, another agency who calculates tsunami heights has calculated that a max. tsunami wave of 0.1 meter may have occurred, nothing to be scared of.

Preliminary data from different seismological agencies referred to magnitudes from 7.9 (USGS), to 7.6 (GEOFON) and only 6.4 (EMSC). Both Geofon and USGS are referring to an extremely dangerous shallow depth of 10 km. EMSC mentions a 60 km much weaker impact. The Mexican Seismological service is maintaining a magnitude of 7.8.

Early reports say 500 houses have been destroyed or highly damaged in Guerrero. Most of these are expected to be old adobe houses. Omotopec is expected to have major damage. Damage will likely be in the tens of millions of US dollars.

2.5 million users have had outages in their electricity following the earthquake. After 90 minutes, 1.5 million users were restored to the grid. In the Eastern control area partial outages  in the cities of Poza Rica and Coatzacoalcos and parts of the states of Puebla, Tlaxcala and Morelos. CFE crews will continue working to restore power as quickly as possible in the affected areas. Follow in depth updates and live reports here.

The number of houses damaged in the epicenter region continues to grow. Up to 800 houses are reported uninhabitable in the epicentral region.

Mexican seismological agency has said that more than 80 aftershocks have been recorded since the mainshock on Tuesday.

In Guerrero, 30000 houses have been reported to have been damaged (it is expected many with cracks in the adobe or fallen cardboard) to some extent. Given that Guerrero is an extremely poor part of Mexico with the second lowest HDI in Mexico, the economic loss will not be significant. However, the impact to locals will be quite high. 800 houses are reported to have collapsed in Guerrero or be so severely damaged that they are uninhabitable. This is the report of the local governor. 2 people were injured in Cuajinicuilapa and Ometepec. Shelter has been provided.

20 schools and hospitals were damaged in four municipalities, including the Ometepec, where the epicenter of the quake was, and one remains without electricity at Tlacoachistlahuaca.

In Oaxaca, 2000 homes and public buildings have been damaged to varying extents.

In Mexico City, 250,000 people were without water service due to a pipe burst by the quake, said City Mayor Marcelo Ebrard.

A local official reported that two people were killed. During a meeting with state and federal government officials, Mayor Salvador Cruz Castro of Cuajinicuilapa, said a collapsed wall crushed one of the victims to death while the other succumbed to complications from a heart attack. The mayor added that the tremor also badly damaged 500 homes and partially damaged about 1,000 others. It was the first report of casualties from the powerful earthquake, with its epicenter in Ometepec of Guerrero state. The tremor was the strongest in Mexico since 1985 when an 8.1-magnitude quake left more than 10,000 people dead. 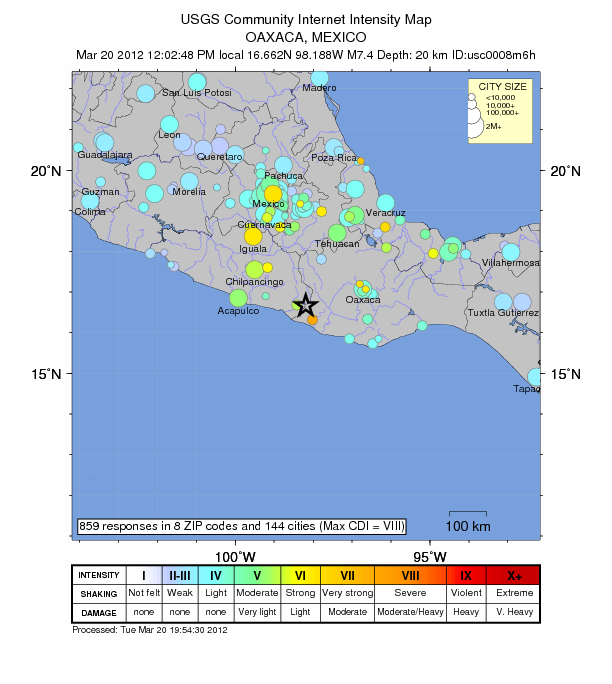 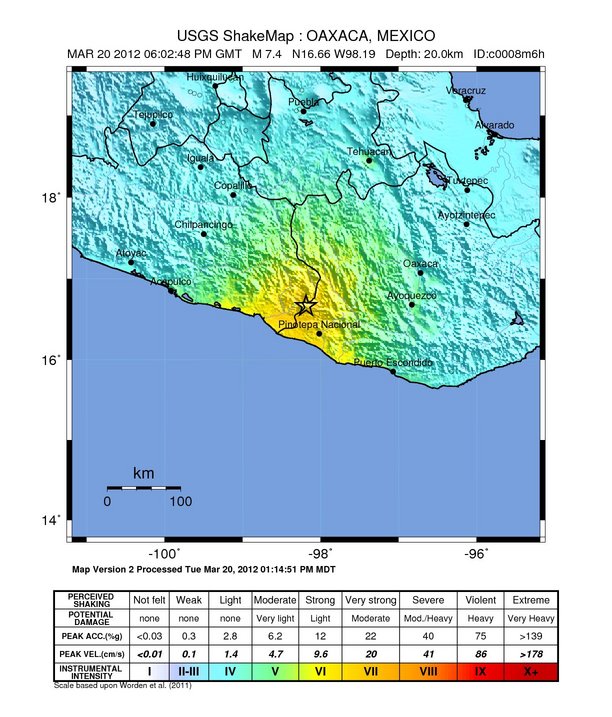 By Thursday, March 22, more than 90 aftershocks have been recorded. Some of them include: