After the intense protest movements during the seven first days of the Ninth wave up until October 28, 2011 it seems to me that the movement for positive change in the world has slowed down at least as what we can see on the surface. The acceleration of time, which culminated during the period March 9-October 28, 2011, will never again be as intense as it was then. On October 28, 2011 all the waves went into their night modes, which however does not mean that the energies of the Mayan calendar will stop influencing us. The Ninth wave, and the energy opening that was created when all nine waves were in the day mode last year, has made an indelible impression on humanity, and after some time of reflection new avenues to move forward will be sought by people more broadly. Thus, the 9th Wave continues to grind unity consciousness into existence, and on October 23 the eighth day of the 8th Wave will be activated and provide a background of feminine energies for this. How these waves will play out in the year 2012 is presented below: 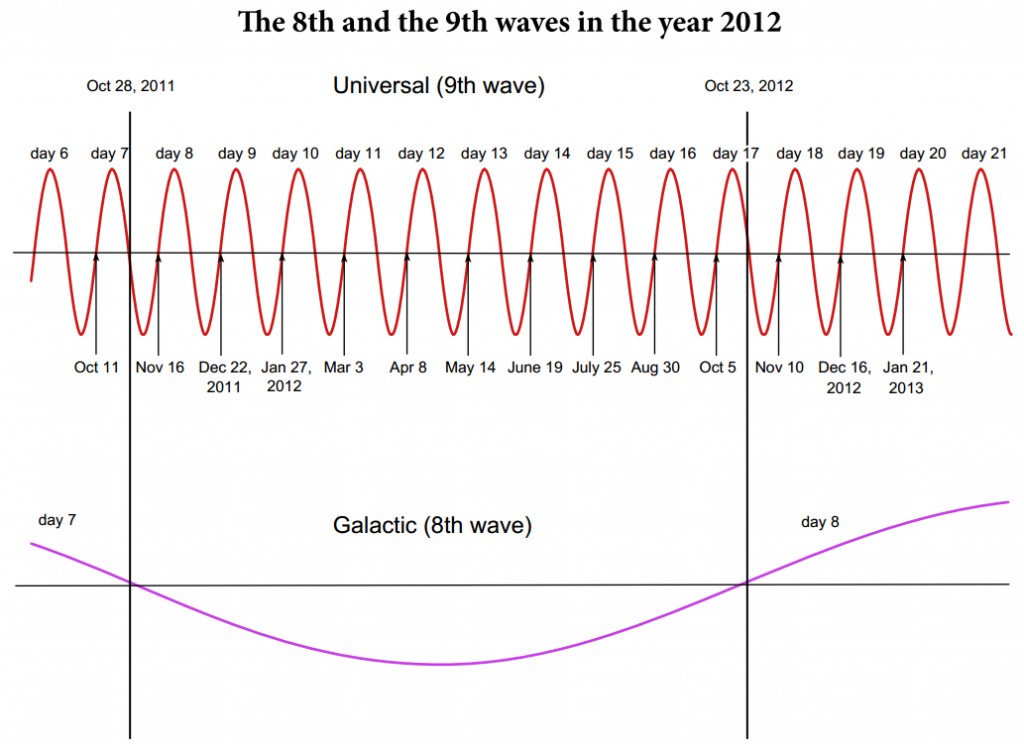 Regardless, the fact that humanity has now experienced all nine levels of evolution means that people everywhere have gained a sense of what is possible and this by itself means an enormous change. My own view is however that we have no reason to expect that any shift in consciousness will take place automatically on a global scale just because there is a special date. If there is a shift in consciousness to be generated, we will have to rise up to the task ourselves. I also think we should keep in mind that a shift in consciousness by definition is not something that is generated out of the already existing frame of consciousness. Thus, a shift cannot be about having more of what we already have like “raising our consciousness” and even less so “raising the vibrations of mother earth.” A shift in consciousness is a shift and not just more of the same or a temporary fluctuation. I think these things are important to keep in mind as we are approaching dates that are possibly to be marked by large events all over the world.

Especially for the December 21, 2012 date some people are however saying that “there will be a shift in consciousness” or “there will be an ascension”, statements that are made without any foundation whatsoever except for the dreams of those pronouncing them. Thus, by themselves both the Venus Transit and the Winter Solstice are like Y2K dates without any inherent energetic meaning and I think it is just as superstitious to associate them with some automatic birth of a new world as the end of the world, which is the big media favorite. What the big media and society at large would most like to see is of course high expectations and then afterwards to be able to say that the Mayan calendar has no meaning. This of course is not true, but very few people have actually gone to the sources of these matters, to verify that no 26,000 year cycle and no galactic alignment, is mentioned in any Mayan source whatsoever. Thus, if people are having expectations based on this, which many do, it completely lacks foundation. A “galactic alignment” has been happening every year for the past 40 years or so and will not create any shift in consciousness this year either. To think that a shift will happen automatically is just millenarianism in a new guise. The Maya clearly did not create their calendar to pinpoint a date in our own time and I think on this point all professional Mayanists agree. If so, they would have created a calendar that was a countdown to this time and they did not. The Mayan kings instead used the calendar to mark shift points in their own time and especially to connect themselves to the time 5125 years ago when the consciousness of nations and all the separation that went with it was first downloaded on our planet. The Mayan kings were themselves rulers of nations and sought legitimacy for this in that early shift in consciousness in 3115 BC when the Long Count began.

Even if nothing will happen automatically it may however still be very possible to use these events to intentionally produce a shift in consciousness. It will then be up to us exactly what to do with it and this is a matter that should be seriously discussed. Maybe in fact the era of nations that the Maya had built their calendar on is now due to come to an end. Almost all forms of separation that exist in the world today in fact depends on our subordination to nationhood, much more so than I think people realize, because it is basically the nations that have instituted the oppression of women as well. Considering that both the Venus Transit on June 6, 2012 and the Winter Solstice on December 21, 2012 involves the sun as a common denominator we may then also ask if this is more than a coincidence that the Mesoamerican traditions have been talking about the arrival of a new Sun. Maybe then, even if nothing will happen automatically, we may be able to intentionally bring about a shift in consciousness with one event leading up to the other. This raises the question what kind of shift would really generate an opening to a future that we would like to have.

Unfortunately, few people are even discussing this issue, as they have been led to believe that a shift will happen automatically. I can guarantee that it will not. I do not think that intentions, and even less so wishful thinking about a better world, are sufficient at this point either. If we want a shift we will actually have to bring it about ourselves and not just any type of meditation would work for this. I do not believe that it would be sufficient to meditate for a few minutes in order to feel good about ourselves for having done something. If it is to have lasting consequences I believe we will have to lift ourselves to a new and higher frame of consciousness, a solar rather than a national.

The Venus Transit on June 6, is an excellent occasion to focus on the sun and bring about such a shift and so may (in the northern hemisphere) be three dark days beginning on December 21 with the same purpose. If this would be successful it could provide a real shift at least in a minority of humanity, who would start to operate on an entirely new basis, earthbound and yet not tied up in its power structures. (Note that also those that oppose their governments, presidents or kings still recognize them as the centers of their lives and are still stuck in the same framework.) A big part of the reason that we do not have peace on earth is of course that we accept different nations as centers and organize our lives around these. If many decide to make the sun the center of the organization of their lives then there would be a completely new basis for life on earth. What I propose is that the shift in consciousness on the Venus Transit and the Winter Solstice of 2012 we should bring is to shift the center of our world from being the nation to being the sun. This can be done by establishing a connection of our third eye, which is our own center, with the sun and would truly be a shift in consciousness. This is not more of the same and it is not something that can be done piecemeal. It has to be done through a shift where we lift ourselves to a new level to become children of the sun. If we are telling ourselves: The sun is the center of my life we will know ourselves if we have reached this level or not. It will all be up to ourselves.