The latest image released by ESO shows two dramatic star formation regions in the southern Milky Way. The first is of these, on the left, is dominated by the star cluster NGC 3603, located 20 000 light-years away, in the Carina–Sagittarius spiral arm of the Milky Way galaxy. The second object, on the right, is a collection of glowing gas clouds known as NGC 3576 that lies only about half as far from Earth.

NGC 3603 is a very bright star cluster and is famed for having the highest concentration of massive stars that have been discovered in our galaxy so far. At the centre lies a Wolf–Rayet multiple star system, known as HD 97950. Wolf–Rayet stars are at an advanced stage of stellar evolution, and start off with around 20 times the mass of the Sun. But, despite this large mass, Wolf–Rayet stars shed a considerable amount of their matter due to intense stellar winds, which blast the star’s surface material off into space at several million kilometers per hour, a crash diet of cosmic proportions.

This zoom sequence takes the viewer deep into the spectacular southern Milky Way in the constellation of Carina (The Keel). We see two regions where stars are forming, the very rich cluster NGC 3603 and its surroundings and the strange glowing gas clouds known as NGC 3576. The final detailed views come from images taken with the Wide Field Imager on the MPG/ESO 2.2-metre telescope at ESO’s La Silla Observatory in Chile. Credit: ESO/G. Beccari/N. Risinger

NGC 3603 is in an area of very active star formation. Stars are born in dark and dusty regions of space, largely hidden from view. But as the very young stars gradually start to shine and clear away their surrounding cocoons of material they become visible and create glowing clouds in the surrounding material, known as HII regions. HII regions shine because of the interaction of ultraviolet radiation given off by the brilliant hot young stars with the hydrogen gas clouds. HII regions can measure several hundred light-years in diameter, and the one surrounding NGC 3603 has the distinction of being the most massive in our galaxy.

The cluster was first observed by John Herschel on March 14, 1834 during his three-year expedition to systematically survey the southern skies from near Cape Town. He described it as a remarkable object and thought that it might be a globular star cluster. Future studies showed that it is not an old globular, but a young open cluster, one of the richest known.

NGC 3576, on the right of the image, also lies in the Carina–Sagittarius spiral arm of the Milky Way. But it is located only about 9 000 light-years from Earth — much closer than NGC 3603, but appearing next to it in the sky.

NGC 3576 is notable for two huge curved objects resembling the curled horns of a ram. These odd filaments are the result of stellar winds from the hot, young stars within the central regions of the nebula, which have blown the dust and gas outwards across a hundred light-years. Two dark silhouetted areas known as Bok globules are also visible in this vast complex of nebulae. These black clouds near the top of the nebula also offer potential sites for the future formation of new stars.

NGC 3576 was also discovered by John Herschel in 1834, making it a particularly productive and visually rewarding year for the English astronomer. 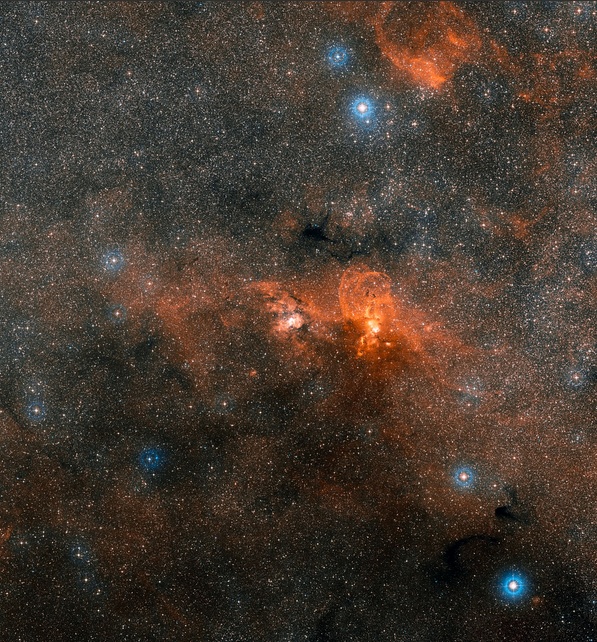 This wide-field image, based on data from Digitized Sky Survey 2, shows the whole region around the cosmic factory NGC 3603, located about 20 000 light-years away. This region contains many star formation regions featuring huge clouds of glowing gas. Credit: ESO/Digitized Sky Survey 2