A groundbreaking survey of more than 700 000 stars near the Milky Way's heart has produced one of the most stunning images of our galaxy– astronomers studying the huge population of stars in the "nuclear disk" theorize that there were two significant periods of star formation in the region, contradicting the currently accepted idea that the galactic center has been constantly forming stars over its assumed 13.5-billion-year life.

The researchers, led by Francisco Nogueras-Lara from Max Planck Institute for Astronomy, gathered the new images using the High Acuity Wide-field K-band Imager (HAWK-I) on the Very Large Telescope (VLT) in Chile, which allowed them to peer through much of the dense gas and debris that clouds our vision of Milky Way's center. 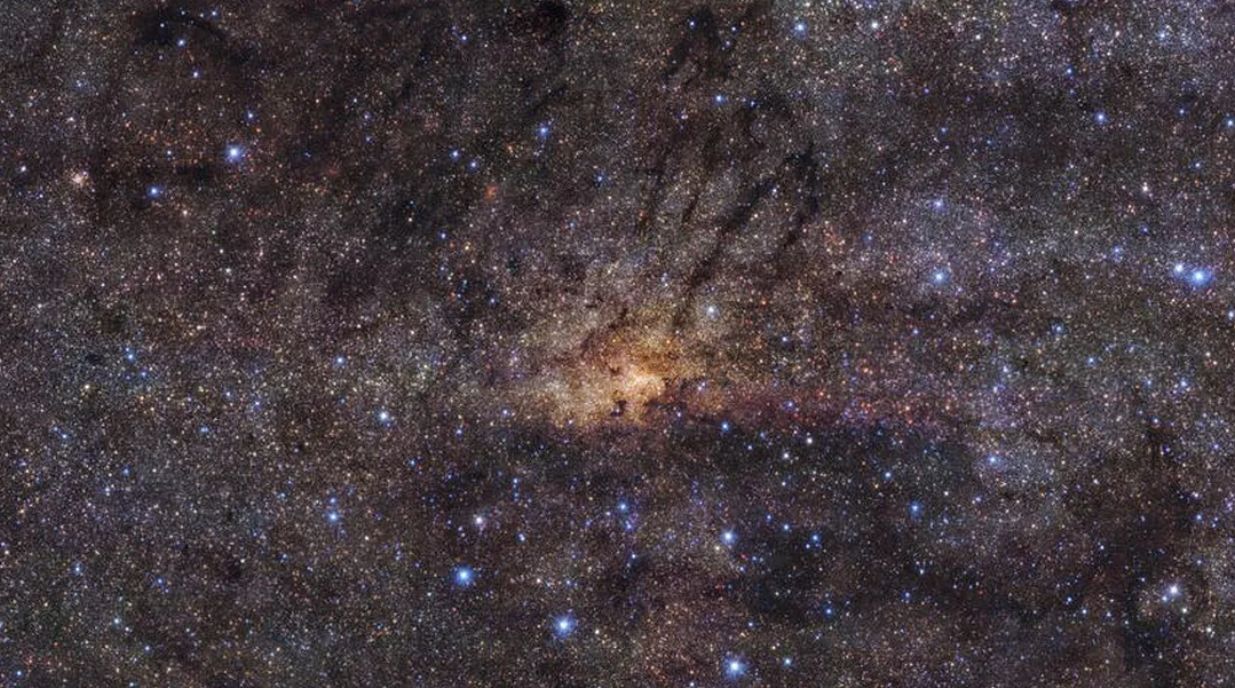 Theoretical models and the HAWK-I snaps enabled the team to tell a new story about the center's star-forming history.

The new research showed that Milky Way's early life was fruitful for the nuclear disk. During the first five billion years, more than 80% of the stars were born but dipped into a quiescent state where star formation dropped away.

However, a massive increase in activity took place just one billion years ago when around 5% of the center's stellar mass exploded to life.

"This burst of activity, which must have resulted in the explosion of more than hundred-thousand supernovae, was probably one of the most energetic events in the whole history of the Milky Way," said Nogueras-Lara.

In addition, the new evidence suggests that Sagitarrius A*, the supermassive black hole at the Milky Way's center, may have gained much of its mass during the galaxy's early formation.

The Milky Way's evolution to its current state, on the other hand, is a contentious question and the new theory will require further analyzing before our galaxy's history books are published.

"Whether populations of stars are built up continuously over billions of years or in a series of shorter bursts has been a long-running argument in astronomy," said Michael Brown, an observational astronomer at Monash University in Melbourne, Australia.

Brown, who was not part of the study, is careful in believing the new theory, suggesting the paper depends on a complex method to establish the massive burst of activity a billion years ago.

"I find the evidence presented tentative rather than absolutely compelling," he noted.

The nuclear disk is a dense stellar structure at the centre of the Milky Way, with a radius of ~150 pc (ref. 1). It has been a place of intense star formation in the past several tens of millions of years1,2,3, but its overall formation history has remained unknown2. Here, we report that the bulk of its stars formed at least 8 Gyr ago. After a long period of quiescence, a starburst event followed about 1 Gyr ago that formed roughly 5% of its mass within ~100 Myr, in what may arguably have been one of the most energetic events in the history of the Milky Way. Star formation continued subsequently on a lower level, creating a few per cent of the stellar mass in the past ~500 Myr, with an increased rate up to ~30 Myr ago. Our findings contradict the previously accepted paradigm of quasi-continuous star formation at the Galactic Centre4. The long quiescent phase agrees with the overall quiescent history of the Milky Way2,5 and suggests that our Galaxy’s bar may not have existed until recently, or that gas transport through the bar was extremely inefficient during a long stretch of the Milky Way’s life. Consequently, the central black hole may have acquired most of its mass already in the early days of the Milky Way.