The International Federation of Red Cross and Red Crescent (IFRC) reported that more than 11 million people are already suffering emergency levels of food shortages in nine Southern African countries, and the figures are expected to catapult to 45 million over the next months as a result of extreme weather including drought, flooding, storms, delayed rainfall, and others.

The crisis in Southern Africa is just one of several emergencies across the continent. Drought and floods are both pounding several countries such as Kenya, Ethiopia, Somalia, and South Sudan.

In South Sudan, about 5.5 million people– roughly half of the nation's entire population– are forecast to suffer from famine in early 2020 because of the said factors, UN agencies said.

In Zimbabwe, drought and economic mismanagement have led the country toward the risk of man-made starvation.

In Zambia, water levels in the Kariba Dam have pummelled in dangerously low levels that power cuts had to be imposed.

In Namibia, cattle herds and other wild animals have been dying.

In Mozambique, one of the countries at greatest risk, around two million people will require food assistance over the next few months. 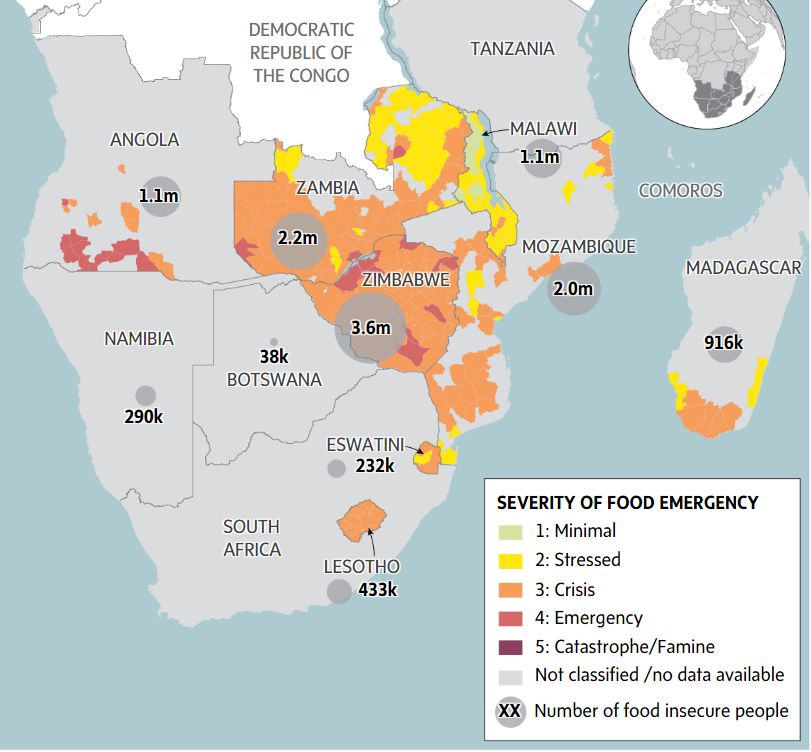 "This year’s drought is unprecedented, causing food shortages on a scale we have never seen here before," said Michael Charles, head of the International Red Cross Federation in Southern Africa.

"We are seeing people going two to three days without food, entire herds of livestock wiped out by drought and small-scale farmers with no means to earn money to tide them over a lean season."

Since 2012, the region has had only two favorable harvests.

Rainfall is also projected to be below-average in the next three months.

"With the region so prone to shocks and afflicted by high rates of chronic hunger, inequality, and structural poverty, climate change is an existential emergency which must be tackled with utmost urgency," said Robson Mutandi, the Southern Africa director for the International Fund for Agricultural Development.