Since the onset of intense earthquake swarm at Bárðarbunga volcano, Iceland, on Saturday, August 16 at 03:00 UTC, and by late Monday, August 18, around 2 600 earthquakes have been detected with the earthquake monitoring network of the Icelandic Meteorological Office (IMO). Of these around 950 occurred since midnight, August 17/18. Several of these events were larger than magnitude 3.

The swarm initially started in the Bárðarbunga caldera and has been migrating in two clusters towards the north and the east of the volcano.

The eastern cluster remains active, according to IMO report:

"Two stronger pulses of activity have occurred between 10:45 and 12:00 as well as 16:50 and 17:30 UTC [August 18]. Within the first pulse around noon, the cluster was again migrating northeastwards, most events are now located between Bárðarbunga and Kverkfjöll. As reported earlier, GPS ground deformation data has evidenced that the earthquake swarm is caused by magma intrusion."

Throughout the whole sequence until August 18 at 20:45 UTC the majority of events has been at 5 – 10 km depth.

No signs of migration towards the surface or any other signs of imminent or ongoing volcanic activity have been detected so far. IMO is monitoring the area around the clock very closely and will update in case of any changes.

This is the most intense earthquake swarm in this area for years, according to IMO. The last confirmed eruption of this volcano took place on June 18, 1910 (VEI 2), while the largest known eruption (VEI 6) took place in February 1477. In historic times there have been large eruptions of this volcano every 250 – 600 years. 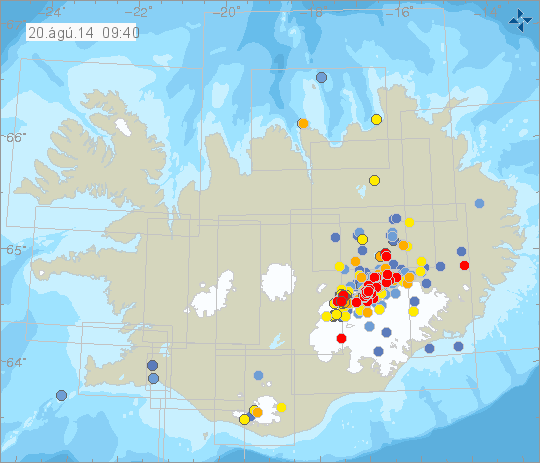 The following is a press release of Iceland's Civile Protection from yesterday evening:

"The Police Commissioners in Húsavík and Seyðisfjörður have decided to close and evacuate the area North of Vatnajökull following the seismic activity in Bárðarbunga.

This decision is a safety measure. It cannot be ruled out that the seismic activity in Bárðarbunga could lead to a volcanic eruption. There is no change in the seismic activity at the moment and no sign of an eruption and but experience shows that seismic activity can be on going for a long time with out an eruption going off. This is first and foremost a precautionary action since the evacuation of the area is impossible on a short notice.

In accordance with procedure, the National Commissioner of the Icelandic Police has raised the Civil Protection level to Alert Phase. All roads leading into the area are now closed and the authorities in Húsavík and Seyðisfjörður are evacuating the area North of Vatnajökull.

The Civil Protection Alert Phase is declared; “if threat assessment shows that hazard is increasing, a preventive measure must be taken immediately to secure the safety of those who are in the area. That is done by strengthening response measures in the area, and by taking preventive actions such as evacuation and closing off the area in question. Preparedness and warnings are also common in this phase."