A pair of CMEs on the farside

A pair of Coronal Mass Ejections are now visible in the latest STEREO Ahead COR2 images. The source of the first CME was located on the farside of the Sun. The second plasma cloud was the result of a filament liftoff near Sunspot 1450. The plasma cloud appears to be directed north and not towards Earth. A solar wind stream flowing from southern coronal hole could brush against Earth's magnetic field on April 7th

The ACE Spacecraft was showing a small increase in solar wind speed after 20:00 UTC Thursday evening. It is possible that this could be a very weak CME impact. This was caused by a filament eruption on April 2nd. Only minor geomagnetic activity is expected at very high latitudes. (SolarHam) 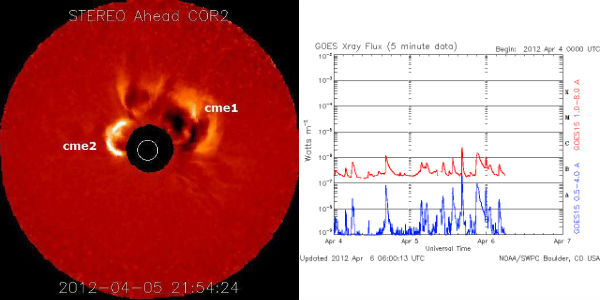 The geomagnetic field has been at quiet to active levels for the past 24 hours with minor to severe storm periods at high latitudes. The increased activity was associated with periods of sustained southward IMF Bz and increased IMF Bt associated with intermittent solar sector boundary changes. The geomagnetic field is expected to be quiet to unsettled on day one (6 April) due to the weak CME that was associated with the filament eruption that occurred on 02 April. The field is expected to return to quiet levels on day two (7 April), then be at quiet to unsettled levels due to a coronal hole high speed stream becoming geoeffective on day three (8 April).