Solar activity was at moderate levels in last 24 hours (12:30 UTC). Region 1974 (S13W05, Fsc/beta-gamma-delta) continued to exhibit growth and separation in the intermediate spots, and was responsible for the majority of the flare activity throughout the period, including three M-class flares. Since it was numbered, couple of days ago, Region 1974 erupted with four M-class solar flares. It is now in perfect position for Earth directed flares.

"A faint, asymmetric full-halo CME was observed via NASA LASCO C2/C3 starting shortly after 11/05 UTC. The event was also faintly visible in NASA STEREO B coronagraph data. Imagery analysis of the event determined a speed of close to 480 km/s for the CME, which does appear to be on a Sun-Earth line. Shortly after, an approximately 15Â° filament was observed in GONG H-Alpha imagery lifting off before 11/07:35 UTC. Imagery from LASCO C2/C3 as well as STEREO coronagraph data suggests that a portion of the ejecta from this filament is also traveling along the Earth-Sun line with an estimated speed of 776 km/s. Both CMEs were input into the ENLIL runs today. The filament event was input into the 11/16:00 UTC run (held to the public) and indicates a glancing blow is expected mid to late day on February 14." (SWPC, February 12, 2014 at 00:30 UTC)

An Enlil run has been submitted and adjustments to timing will be made, based on the output of this model run. An eruptive prominence on the southwest limb was observed lifting off from approximately 12/06:35 UTC to 12/07:54 UTC. The associated CME appears to have a trajectory too far southward to have an impact at Earth." (SWPC February 12, 2014 at 12:30 UTC)

For more data go to http://sdo.gsfc.nasa.gov/data/

Region 1974 (S13W05, Fsc/beta-gamma-delta) is rapidly growing and poses an increasing chance of Earth-directed flares. Region 1978 (N05W45, Dso/beta) exhibited consolidation in both the leader and trailer spots, yet remained inactive during last 24 hours. The rest of the spotted groups are relatively stable and inactive. 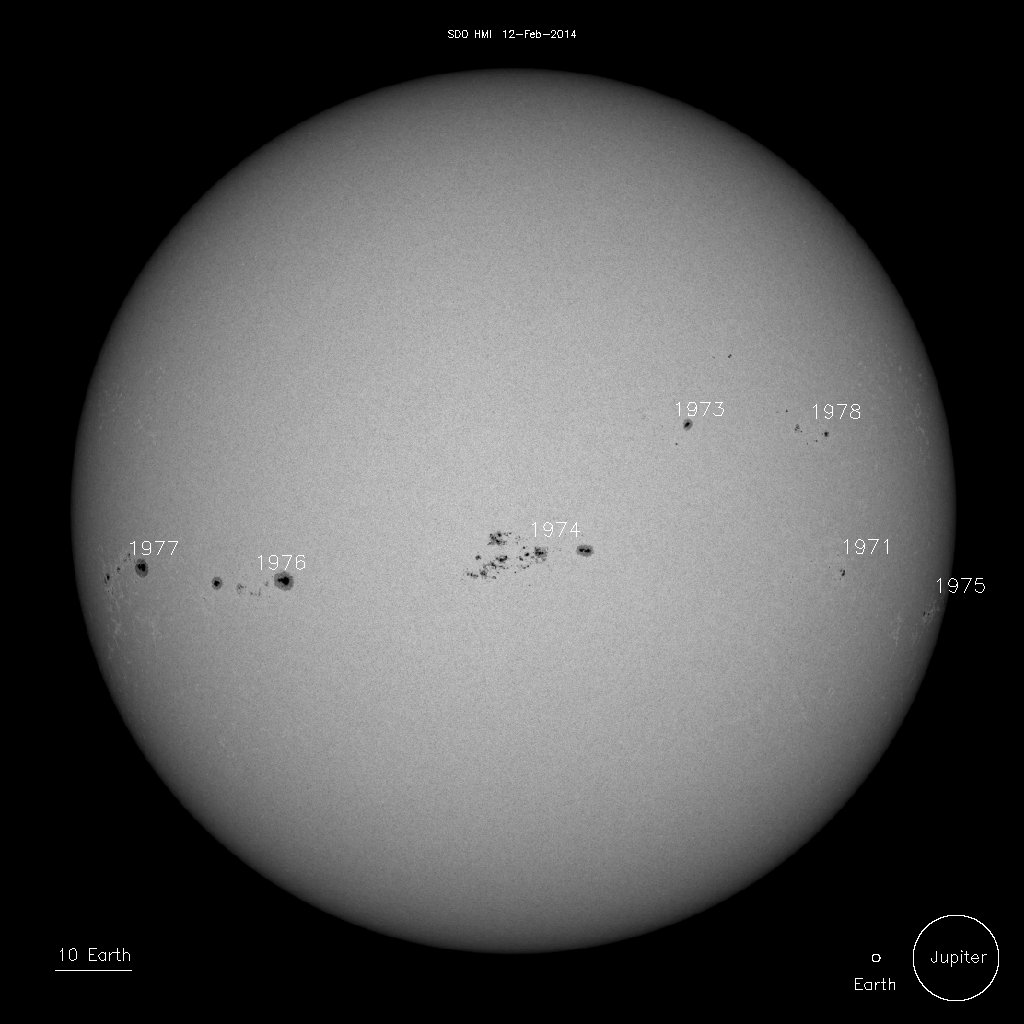 In last 24 hours, the geomagnetic field was at quiet to unsettled levels due to intermittent periods of weak negative Bz associated with a negative polarity (CH HSS).

The geomagnetic field is expected to be at quiet to unsettled levels today and mostly quiet tomorrow. (Based on SWPC data)