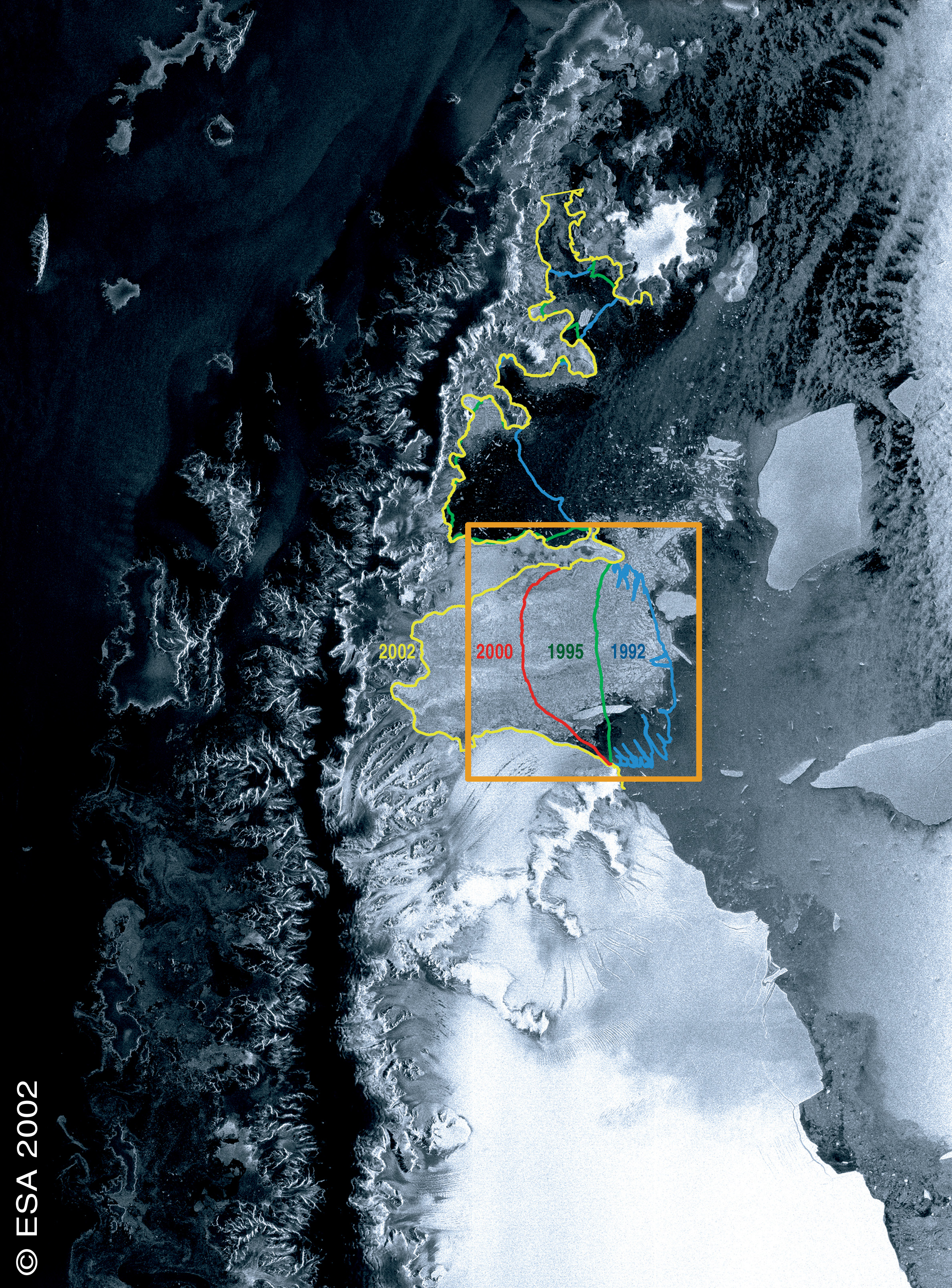 As ESA’s Envisat satellite marks ten years in orbit, it continues to observe the rapid retreat of one of Antarctica’s ice shelves due to climate warming.

One of the satellite’s first observations following its launch on 1 March 2002 was of break-up of a main section of the Larsen B ice shelf in Antarctica – when 3200 sq km of ice disintegrated within a few days due to mechanical instabilities of the ice masses triggered by climate warming.

Now, with ten years of observations using its Advanced Synthetic Aperture Radar (ASAR), Envisat has mapped an additional loss in Larsen B’s area of 1790 sq km over the past decade.

The Larsen Ice Shelf is a series of three shelves – A (the smallest), B and C (the largest) – that extend from north to south along the eastern side of the Antarctic Peninsula.

Larsen A disintegrated in January 1995. Larsen C so far has been stable in area, but satellite observations have shown thinning and an increasing duration of melt events in summer.

“Ice shelves are sensitive to atmospheric warming and to changes in ocean currents and temperatures,” said Prof. Helmut Rott from the University of Innsbruck.

“The northern Antarctic Peninsula has been subject to atmospheric warming of about 2.5°C over the last 50 years – a much stronger warming trend than on global average, causing retreat and disintegration of ice shelves.”

Envisat has already doubled its planned lifetime, but is scheduled to continue observations of Earth’s ice caps, land, oceans and atmosphere for at least another two years.

This ensures the continuity of crucial Earth-observation data until the next generation of satellites – the Sentinels – begin operations in 2013.

“Long-term systematic observations are of particular importance for understanding and modelling cryospheric processes in order to advance the predictive capabilities on the response of snow and ice to climate change,” said Prof. Rott.

“Climate models are predicting drastic warming for high latitudes. The Envisat observations of the Larsen Ice Shelf confirm the vulnerability of ice shelves to climatic warming and demonstrate the importance of ice shelves for the stability of glaciers upstream.

“These observations are very relevant for estimating the future behaviour of the much larger ice masses of West Antarctica if warming spreads further south.”

Radars on Earth observation satellites, such as Envisat’s ASAR, are particularly useful for monitoring polar regions because they can acquire images through clouds and darkness.

The Sentinel missions – being developed as part of Europe’s Global Monitoring for Environment and Security (GMES) programme – will continue the legacy of radar observations.

Source: ESA
Featured image: This image of the Larsen B ice shelf is one of the first photos taken by Envisat on 18 March 2002. Prior to Envisat’s launch, ERS-1 and -2 had been monitoring changes in the region. Together with ERS data, this image (orbit 250) documents the 100-km retreat of the Larsen B ice shelf. Today, Envisat’s radar continues to make regular, all-weather observations to enable detailed studies of the extent, surface motion and surface melt of all the ice shelves around Antarctica.  Credit: ESA