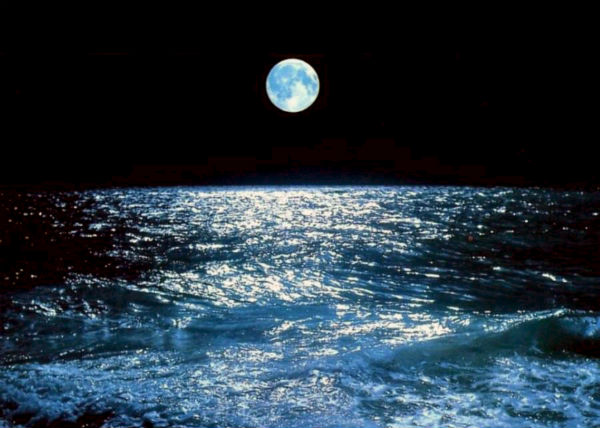 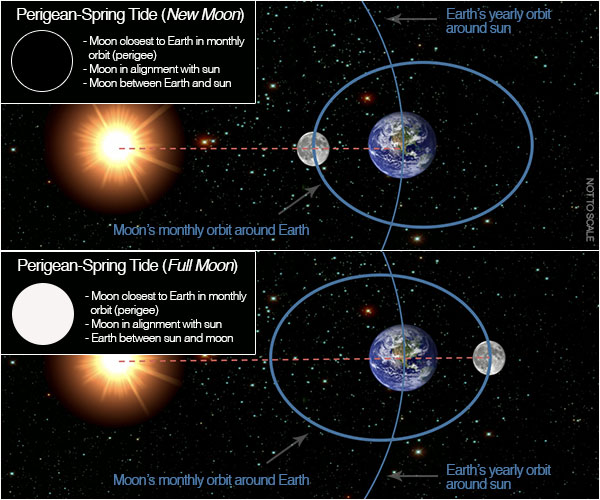 Spring tides are especially strong tides (they do not have anything to do with the season Spring). They occur when the Earth, the Sun, and the Moon are in a line. The gravitational forces of the Moon and the Sun both contribute to the tides. Spring tides occur during the full moon and the new moon.  Every 7½ lunations (the full cycles from full moon to new to full), perigee coincides with either a new or full moon causing perigean spring tides with the largest tidal range. If a storm happens to be moving onshore at this time, the consequences can be severe. The Proxigean Spring Tide is a rare, unusually high tide. This very high tide occurs when the moon is both unusually close to the Earth (at its closest perigee, called the proxigee) and in the New Moon phase (when the Moon is between the Sun and the Earth). The proxigean spring tide occurs at most once every 1.5 years.

Full or New Moon and Perigee

During full or new moons—which occur when the Earth, sun, and moon are nearly in alignment—average tidal ranges are slightly larger. This occurs twice each month. The moon appears new (dark) when it is directly between the Earth and the sun. The moon appears full when the Earth is between the moon and the sun. In both cases, the gravitational pull of the sun is ‘added’ to the gravitational pull of the moon on Earth, causing the oceans to bulge a bit more than usual. These are called ‘spring tides.’

Once every 28 days, the moon reaches a ‘perigee,’ its closest point of approach to the Earth. This is the point at which the gravitational pull of the moon is strongest. During these periods, there will be a slight increase in the average range of tides. About three or four times a year (in the spring and the fall), the new or full moon coincides closely in time with the perigee of the moon—the point when the moon is closest to the planet. These occurrences are often called ‘perigean spring tides.’

The difference between ‘perigean spring tide’ and normal tidal ranges for all areas of the coast is small. In most cases, the difference is only a couple of inches above normal spring tides. The largest difference occurs in certain areas of the Alaska coast where the range of the tide may be increased by around six inches. But considering that these areas have an average tidal range of more than 30 feet, the increase is but a small percentage of the whole (less than a two percent increase).

Perigean spring tides do not cause coastal flooding

On March 6, 1962, a catastrophic perigean spring tide struck from the sea in the darkness of predawn, and for the following 65 hours inundated the entire Atlantic coastline of the United States from the Carolinas to Cape Cod. This disastrous event resulted in a loss of 40 lives and over $0.5 billion in property damage. On January 4, 1912 a full Moon and a lunar perigee occurred, with these two events separated by only a few minutes of time and with the Earth near perihelion. The resulting lunar distance (356,375 km) on that date stands as the closest approach of the Moon to the Earth in an interval of more than 1400 years.

The Full Moon of April is usually called the Egg Moon. In Algonquian it is called Pink Moon. Other names are Sprouting Grass Moon, Fish Moon, Seed Moon, and Waking Moon. In Hindi it is known as Hanuman Jayanti. The Full Moon rises around sunset and sets around sunrise, the only night in the month when the Moon is in the sky all night long. (TheMoonAndTides)

Full Moon “will rise” exact at 3:19 p.m. EDT). This evening the Moon shines in the east with Spica a little to its left and Saturn farther left — a pretty lineup. Farther to the Moon’s right, look for the four-star pattern of Corvus, the Crow. Much farther to the upper left is bright Arcturus, the “Spring Star.”

The Moons and Tides