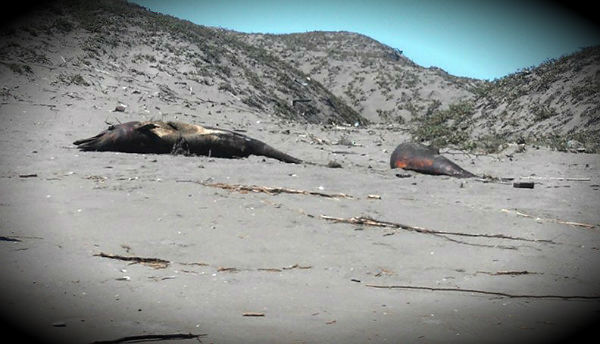 More than 3,000 dead dolphins have washed ashore in last 3 months along the stretch of coastline in Lambayeque, north Peru. On March 28, Dr. Carlos Yaipen Llanos of the Peruvian-based marine mammal rescue organization ORCA and Hardy Jones (BlueVoice) counted 615 dead dolphins on 135 kilometers of beach north of San Jose. The representative of the Ecological Reserve Chaparrí, Heinz Plengue, indicated that only in recent days, 418 dolphins appeared stranded along 36 kilometers of the beach of Palo Parado area, opposite the island Lobos de Tierra, in Mórrope. The IMARPE has sampled stranded species to analyze the causes of death. According to a report from Peru 21, local fishermen in Lambayeque, north Peru, were first to notice the inexplicable rise in dead dolphin appearing on shore – averaging roughly 30 per day. 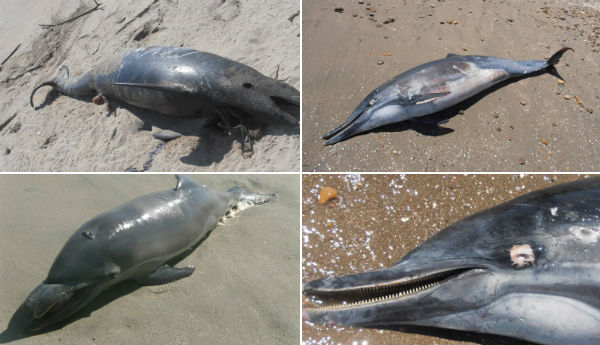 The Association of Mari-cultivators of Lambayeque ruled that fishermen have killed mammals.  Dr. Yaipen Llanos has found that diabetes appears especially prevalent among those who eat the meat of dolphins. It is illegal to hunt dolphins in Peru but it is done with impunity and the practice appears to be growing. Same discoveries were made in Taiji, Japan by Hardy Jones. It has long been known that Persistent Organic Pollutants (POPs) are estrogen-imitators and endocrine disruptors. More recently it has been shown that in humans a high body burden of these chemicals causes insulin resistance and can lead to diabetes and obesity.

The event seems to start with a stranding of a live seven meter (22 foot) Cuvier’s beaked whale on February 6, 2012 that was rescued by locals. This whale stranded near Paracas, south of Lima. Then on February 11, dead dolphins starting washing ashore north off Lima. The Peruvian Sea Institute has taken samples to study in a laboratory. The institute also found dead anchovies in the sea, which may have poisoned the dolphins. Another possibility is that the dolphins suffered from a disease outbreak. Since then, dead dolphins have been washing ashore in Lambayeque region reaching alarming 3000 dead dolphins. (video) 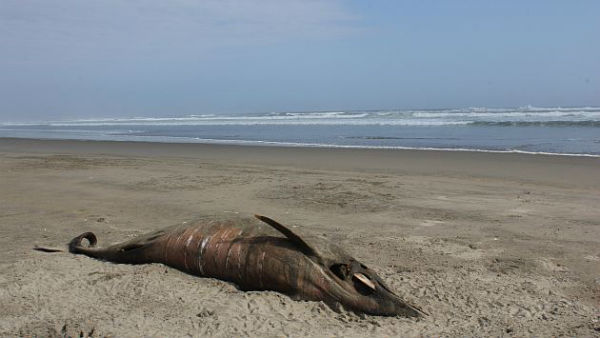 And as far as enlisted experts can tell, offshore oil exploration in the region is the most likely culprit. While such mass orca stranding are not entirely uncommon, or fully understood, Peruvian biologist Carlos Yaipen says activity from petroleum companies in the nearby waters is to blame in this instance. Yaipen believes that a controversial technique for detecting oil beneath the seabed, using sonar or acoustic sensing, is leading the death of marine life en masse. The oil companies use different frequencies of acoustic waves and the effects produced by these bubbles are not plainly visible, but they generate effects later in the animals. That can cause death by acoustic impact, not only in dolphins, but also in marine seals and whales. BlueVoice.org stated that “initial tests … show evidence of acoustical impact from sonic blasts used in exploration for oil”. U.S. has suspended similar testing in the Gulf of Mexico due to recent sightings of dead and sick dolphins. The ban was set to last through the dolphins’ calving season, which ends in May.

The marine airgun is the most widely used energy source for offshore seismic exploration. Airguns produce high levels of predominantly low-frequency sound by releasing controlled volumes of high pressure air into the water creating an oscillating bubble which produces 90 per cent of its energy in the band 70 to 140 Hz. Individual airguns are deployed as an array that is towed behind a vessel. The energy propagates in three dimensions as a series of lobes defined by the array geometry, tow depth, and interaction of each array element. The seismic source utilizes the air-water interface to reflect the wave-front downwards thus improving the overall efficiency. 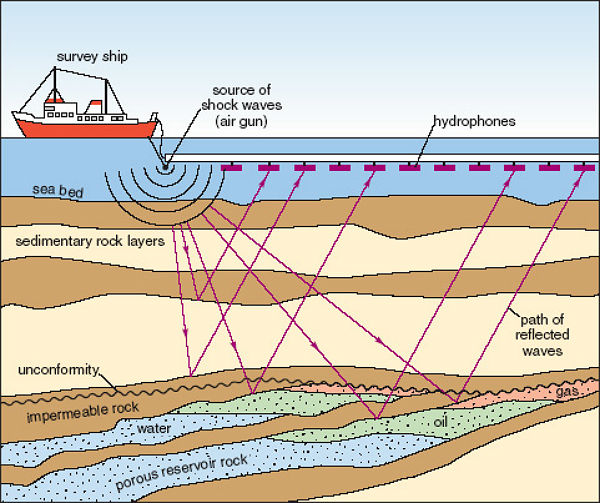 In 2003, scientists from the Zoological Society of London discovered that underwater sonar can lead to the formation of microscopic bubbles of nitrogen in the bloodstream and vital organs of aquatic mammals, afflicting the animals with a lethal condition commonly known as the Bends. Additionally, low-range acoustic sensors are suspected to cause disorientation and internal bleeding to exposed wildlife.

According to Offshore Magazine, a trade publication of petroleum news, at least one entity, Houston-based oil company BPZ Energy, has been actively surveying the seabed along the coast of Peru (BPZ Energy’s Corvina and Albacora fields offshore Peru has been averaging around 3,920 b/d. ) since the beginning of the year. A new 3D seismic survey has been under way for a month on offshore block Z-1, and should be completed during 2Q 2012, followed by a period of processing and interpretation. Block Z-1 is a coastal offshore area covering 739,205 acres in the Tumbes Basin. Eighteen wells had previously been drilled in Albacora, Barracuda, Corvina, Delfin, and Piedra Redonda Fields during the 1970s and 1980s, with the five structures testing for oil and/or gas by other operators. The Corvina Field is located offshore in shallow waters of the Tumbes Basin. The Albacora oil field is located in the northern part of our offshore Block Z-1. The Albacora platform is approximately 100 miles from the Talara refinery, where production from the Corvina Oil Field is currently being marketed. 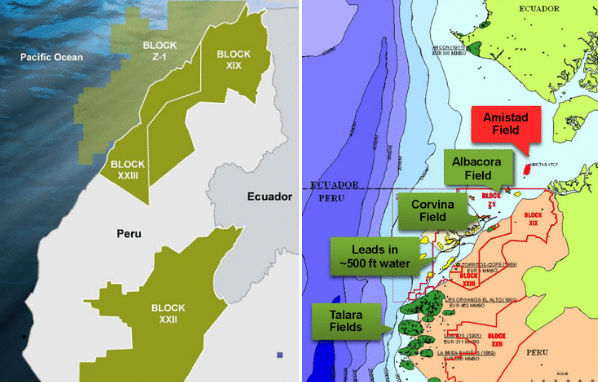 On 4th July, 2011 Gold Oil signed a definitive agreement with BGP Geoexplorer PTE Ltd for the acquisition of a marine 3D seismic survey over Block Z34 offshore Peru. The survey has been extended and is now planned to be in excess of 800 sq km over both the southern and northern part of the licence area. This survey comprises the first phase of 3D seismic over the licence. Depending on the results of the seismic interpretation further seismic may be required, particularly in the northern area, to evaluate completely this large and highly prospective block. The vessel, the “BGP Pioneer”, departed the port of Paita, north-west Peru on 6th July having met all customs clearances and commenced operations on 9th July 2011. Given the expanded scope of the survey, data acquisition is now expected to take approximately 50 days. Following the acquisition of the survey, processing and initial interpretation is expected to take a further four months. Preliminary results and the marketing of the asset to potential farm in candidates is likely, therefore, to commence towards the end of the year. 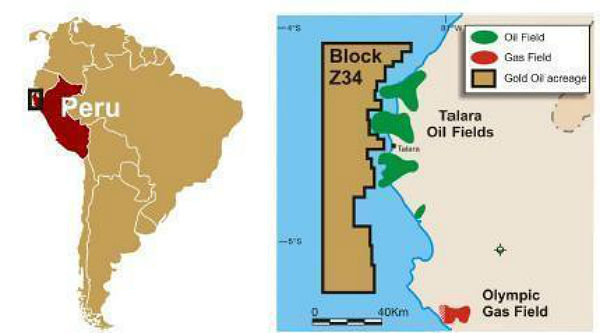 Z-38 block is around 20km from the oil and natural gas fields Albacora, Corvina and Piedra Redonda discovered in the 1970’s and 1980’s in the Z1 block. The Karoon Gas Australia Ltd. work at offshore Peru acreage block Z38 is in water depths from 200 to 700m and is located 56km west of the city of Tumbes and 39km west of the Caleta Cruz (refurbished dock and 135 MW proposed power plant). In addition to the port city of Tumbes with its energy markets and infrastructure it is also close to the border of Ecuador and Ecuador’s most populous city, Santiago de Guayaquil. To the northeast in the Gulf of Guayaquil, approximately 60 kilometers from the block, is the Miocene Amistad gas field, operated by Noble Energy that delivers 13 Bcf per year to a 130 MW power plant at the fast-growing, regional, Ecuadoran city of Machala. 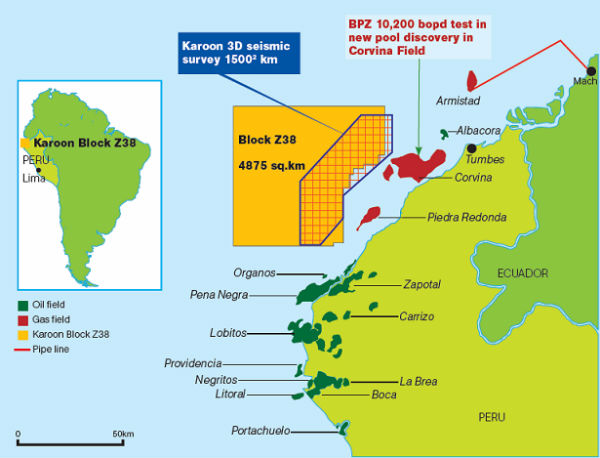 Attractive commercial terms have been introduced by the Government to encourage investment and exploration to stem Peru’s falling domestic oil production. Peru is also one of the most open countries to private investment in South America. In addition, Peru and Ecuador’s demand for electricity provides an economically attractive market for gas.

In 2011 a pod of common dolphins swam towards the area where the Navy was testing their C4 explosions (the area was relatively shallow). Immediately, 3 dolphins surfaced dead. They were collected and very extensive necropsy was performed within 24 hours. The tests included MRI, CT scan, toxicology, histology, basically everything. All 3 animals had similar finding, but the severity varied depending on the distance from the blast. Findings indicated intact lungs, hemorrhage in various areas, fractured ear bones on one side (similar to unofficial Peru reports!) and most importantly acute myocardial infarction. Basically the cause of death was acute vascular gas embolism. The research team concluded that in cases like that extensive cardiac sampling is the most important indicator of the cause of death. Now, it is not clear if extensive cardiac sampling was done in Peru or even if it was possible based on the decomposition state. (StrandedNoMore)