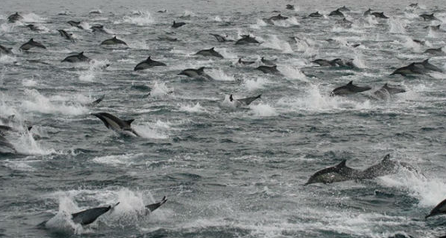 Thousands of dolphins were spotted on February 14, 2013 off the coast of San Diego, a boat captain told NBC 7 San Diego. Capt. Joe Dutra of Hornblower Cruises said he saw a “super mega-pod” of common dolphins while he was on his daily tour. According to him the pod was more than 7 miles long and 5 miles wide. Dutra said the boat tour followed the pod for more than an hour and said he’s never seen anything like it. Dutra estimated there were about 100,000 dolphins swimming in the area.

“They were coming from all directions, you could see them from as far as the eye can see. I’ve seen a lot of stuff out here… but this is the biggest I’ve ever seen, ever.” Capt. Joe Dutra. 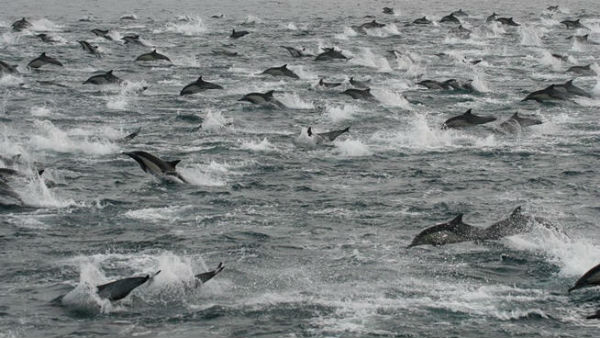 Antonio Ramirez who was aboard a Hornblower Cruise on February 14, 2013 snapped this photo of the dolphins swimming in a “super mega-pod.” (Courtesy of Antonio Ramirez)

According to marine mammal expert Sarah Wilkin, the reason the large pod might be there is because there’s plenty of food in the area, including sardines, herring and squid. Though dolphins typically travel in groups of 200 or less, Wilkin said “super-pods” are not unheard of.

At the beginning of January 2013, a pod of about 1,000 common dolphins began a stampede, churning across the blue-gray waters off Dana Point at a rapid pace. Dave Anderson, the captain of Capt. Dave’s Dolphin and Whale Safari, said that in the decades he’s spent on the water and out among Southern California’s dense dolphin population, it’s a phenomenon he’s encountered only rarely. Bellow is the amazing video.


Southern California has the greatest density of dolphins per square mile than anywhere on earth. This includes nearly 450,000 common dolphins like the ones in this video. Dana Point is one of the best places in the world to see one of these large megapods that can number in herds of up to 10,000. Porpoising is their fastest mode of travel as there is less resistance in air than water.

Featured image: Photo of the dolphins swimming in a “super mega-pod. (Courtesy of Antonio Ramirez)