A weak interplanetary shock was registered by ACE spacecraft at 10:58 UTC on February 16, 2013. This event is not expected to bring widespread geomagnetic disturbances, however, it sparked aurora displays at very high latitudes.

The Kp index is currently at 4, very close to minor geomagnetic storm level. Geomagnetic Sudden Impulse was observed at 12:10 UTC on February 16, 2013 with 10 nT Bz fluctuation. 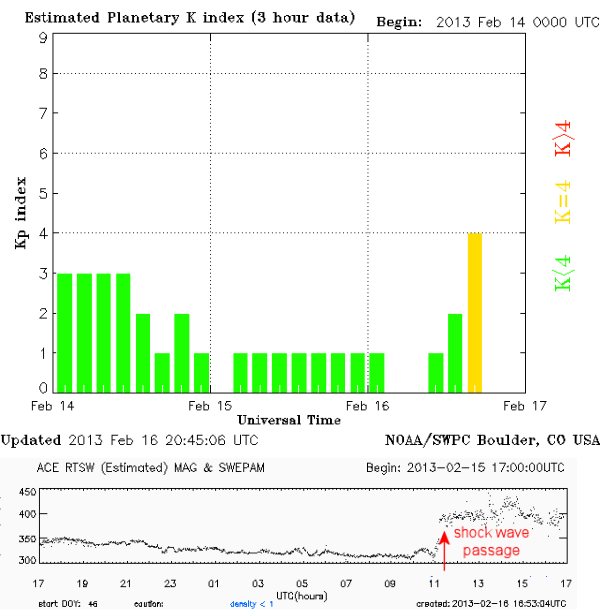 There are currently 3 numbered sunspots at the visible solar disk. None of them is actively flaring. Sunspot 1671 and new Sunspot 1673 remain fairly stable. Another, small new sunspot is forming in the northeast quadrant and another sunspot trailing region 1673 is now beginning to rotate onto the southeast limb. 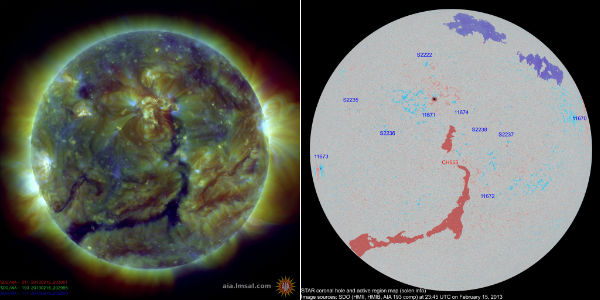 A couple of Coronal Mass Ejections were observed on February 15, 2013. as a result of a prominence liftoff. Most of ejected plasma was directed to the west, away from Earth. LASCO C2 observed a partial halo CME on February 15, 2013 around 17:36 UTC.  CME originated from the south-east of AR 1671. Due to the position of the source region, this event might be geoeffective, with an arrival around February 20, but this will be refined as new information is available.