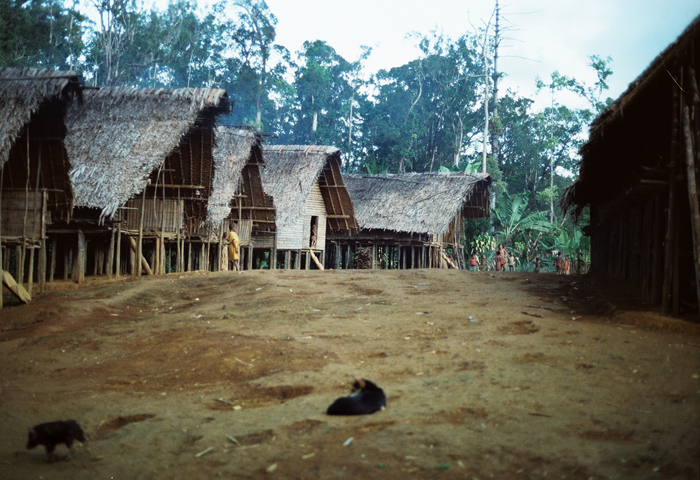 An intensity III (weak shaking) has been reported in Lae to USGS. All the houses in the coastal villages (except parts of Finschhafen) are almost completely build in wood and bamboo. This area is used to frequent strong, very strong and even massive earthquakes. 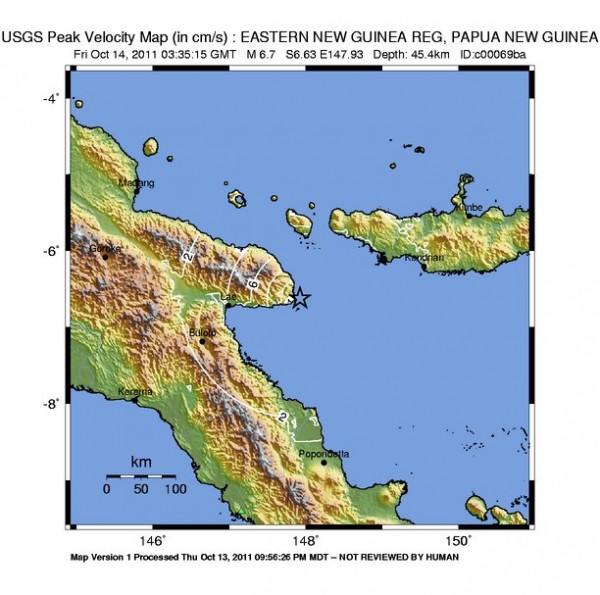 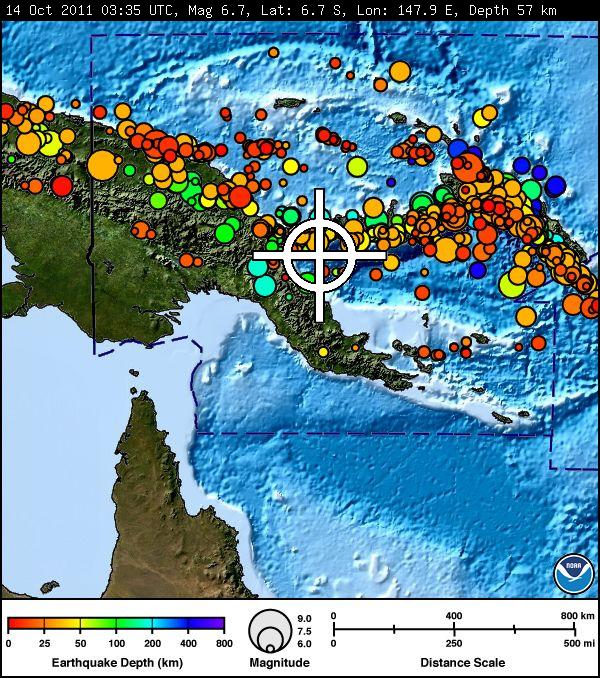 The island as a whole has an area of 868,000 km, which the eastern 462,800 km is part of Papua New Guinea. Both geologically and topographically, the country is very new. It is situated in a zone where the earth’s crust is very weak, on the boundary between two tectonic plates, those of the ancient continent of Australia and of the Pacific Ocean. It forms part of the so-called “Ring of Fire” around the edge of the Pacific, and most of the country has been formed by comparatively recent earth movements and volcanic activity.

The Coastal and Islands regions tend to be hot and humid, with temperature ranges averaging between 68 and 89 degrees. Some areas in the South have a distinct rainy and dry season, such as Port Moresby, while other coastal areas have a wet season (Madang and Morobe), but is not so clearly defined as in the South. Rainfall in such areas is high. For example, the city of Lae receives between 13 and 15 feet of rain per annum (390 to 450 cms).

The Highlands regions can be quite chilly at night although the days are usually warm and clear. A typical highlands cloud cycle takes place each day – clear in the morning with some local fogs followed by an increasing cloud buildup. Afternoon rains are common. The overall appearance of the country is extremely rugged, particularly in the highlands, which are characterized by sheer slopes, sharp ridges, fast-running rivers and the scars of innumerable landslides. The dominant feature of the country is the central spine, a complex of high mountain ranges intersected by alpine valleys and many plateaus.

The mainland ranges from open beaches to coastal swamps and rough fjord- like areas in Oro Province, to dry savannah country in the Markham and Ramu valleys, and the steep precipitous mountains of the Highlands region. Mt. Wilhelm is the highest mountain in Papua New Guinea and is about 15,000 ft (4000 m). The interior of the island is very mountainous with fast flowing rivers and deep valleys.

There are few large valleys In the Papuan region but the New Guinea region has several large open valleys such as the Asaro, the Jimi and Wahgi, provide excellent agricultural and pasture land. Offshore, there are many small islands, many without fresh water.

Island provinces are located off the tip of Papua with a cluster of islands forming the Milne Bay Province, and to the north of the New Guinea mainland, the provinces of Manus, New Ireland, East New Britain, West New Britain and North Solomons (Bougainville). All island provinces are noted for their coral reefs, beaches, rich volcanic soil and abundance of marine resources. The islands of New Britain and bougainville have active volcanoes and experience earthquakes of up to 5 on the richter scale from time to time.

The Matupit or Volcano erupted recently on September 19, 1994 and destroyed the township of Rabaul. Along the coast, the tropical weather dictates light, comfortable clothing. Umbrellas are more comfortable than raincoats. In the cooler regions, the days are warm so light clothing is recommended. In the highlands, a sweater or light jackets are recommended at night when the temperature drops. Most highlands’ residents sleep under blankets all year round. (PNGEmbassy)