Officials and experts in one New Jersey town are scratching their heads over a mysterious hole that appeared in a yard last week. For now, it appears the small crater that splayed debris across a 100-foot area wasn’t caused by a meteorite. Beyond that, it’s a mystery.

“It’s just really, really weird,” said Jerry Vinski, director of nearby Raritan Valley Community College’s planetarium, who conducted tests on the site. “We dug around and couldn’t find anything. We used metal detectors because all meteors have metal in them, and we couldn’t find anything, large or small.”

Bernards Township Police Capt. Edward Byrnes said whatever hit the front yard in the Basking Ridge section left a crater about 18 inches deep and roughly the size of a coffee table. Rocks and soil were scattered around the yard and driveway.A State Police bomb squad ruled out explosives. According to Byrnes, no one in the neighborhood heard or saw anything at the time of the May 6 incident. The homeowner called police upon arriving home. 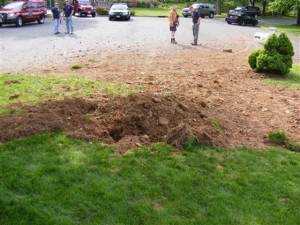 “The weather was clear, there were no reports of lightning strikes; nobody reported seeing anything,” Byrnes said. “I’ve never seen anything like this in 23 years.“

“When you see meteor showers in the upper atmosphere, they’re traveling 50 miles a second,” he said. “Even if it’s slowing down through the atmosphere, you’re still going to have a sonic boom. And it would have left something behind, it wouldn’t have completely disintegrated.” (NJ.com)