Yellowstone super volcano is even bigger than first thought

The volcanic mass, known as the Yellowstone Caldera or more commonly the Yellowstone Supervolcano, was previously measured at about 25 miles by 37 miles wide. However, a new study, set to be published in the Geophysical Research Letters journal says there may be more to it than that. 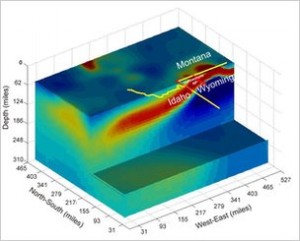 Using a new method of magnetic imaging, scientists have come to theorize that the plume feeding the underground volcano could extend further than seismic measurements taken in 2009 suggest.

The caldera has seen quite a bit of activity in recent years. According to National Geographic, some areas of Yellowstone have seen the ground rise as much as much as 10 inches as a result of swelling magma.

However, the ground has swelled and reduced numerous times over the years. While ground swelling can be a sign of a pending explosion, such as in the case of Mt. St. Helens, it doesn't necessarily mean an eruption is looming, according to NatGeo.

The last eruption of the 'supervolcano' occurred 640,000 years ago, and resulted in the miles-wide crater that currently takes up a large swath of Wyoming. (HuffingtonPost)